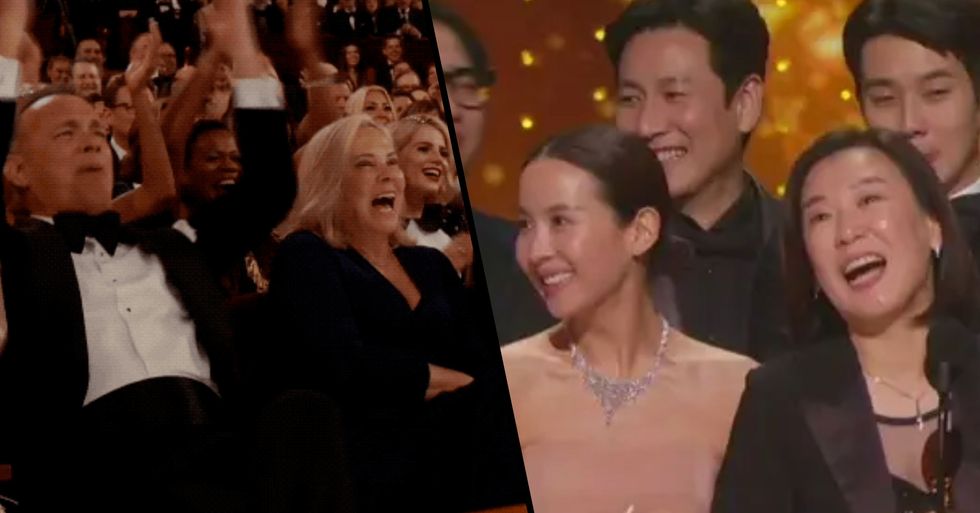 Last night was the evening that we have all been waiting for... The Oscars. The whole world has been waiting in anticipation for the evening, where winners of some of the most coveted awards were announced from an all-star shortlist.

It was also a history-making evening as Parasite took home the award for Best Picture. However, Tom Hanks and Charlize Theron were forced to step in after the cast's speech was cut short.

Especially when it comes to the 9 flicks that went head to head in the "Best Picture" category.

Although Joaquin's speech wasn't the only moment that got people talking...

History was made when Parasite bagged the coveted Best Picture Award - making it the first non-English movie to ever win an Oscar.

Of course, that wasn't the only award Bong Joon-Ho’s comedy-drama took home.

So of course, the cast were over the moon with how well the movie was received...

But devastatingly, their speech was cut off by producers mid thank you.

As executive producer, Miky Lee, took the stage to say something, the lights went out. Then, the spotlight was put on Jane Fonda, who was set to close the show.

But Fonda hesitated while a revolt kicked off in the crowd.

Who spearheaded the revolt, you may ask? Well, it was no other than Tom Hanks and Charlize Theron. Keep scrolling to watch...

The pair were leading a chant shouting "UP, UP" to bring the stage lights back so the cast could finish their speech.

... and their efforts paid off!

The stage lights quickly came back on...

A move that was met with unanimous cheers across the theater. “Hi, everybody," Lee said. “I’d really like to thank director Bong. Thank you for being you, and I like everything about him, his smile, his crazy hair, the way he talks the way he walks and especially the way he directs. But what I really like about him is his sense of humor."

She then went on to thank everyone who has supported the movie...

“And especially I really, really, really want to thank our Korean film audience, or moviegoers, who has been really supporting all our movies and never hesitated to give us straightforward opinion on what they feel like their movies," she said. “That made us never be able to be complacent, and [it] keeps pushing the directors, the creators [to] keep pushing the envelopes. And without you, our Korean film audience, we are not here."

Tom Hanks, Charlize Theron and Margot Robbie leading the chant to get the lights and microphone up again for the Pa… https://t.co/Zrw8Y6DNyV
— Sofía (@Sofía)1581312934.0

Congrats to the Parasite cast and crew! Want more on the Oscars? Keep scrolling to learn more about the "secret message" hidden in Natalie Portman's dress.
52%

$9.99 $7.99
Buy Now
See More Deals
We hope you find these deals as awesome as we do! Just an FYI: we may receive a share of sales from links on this page