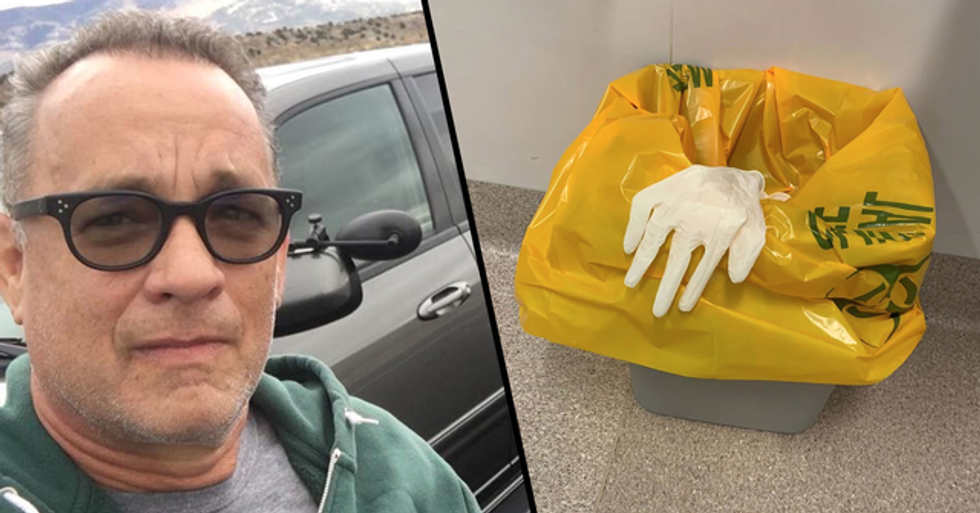 Last night, treasured Hollywood legend, Tom Hanks, announced that he and his wife have been diagnosed with coronavirus.

Hanks shared a cryptic photograph in the hospital alongside his announcement, and eagle-eyed social media users are spotting a deeper meaning behind the image.

But, despite his diagnosis, it seems that Tom is in great spirits...

It appears that his love of hidden messages is intact, also.

Eagle-eyed social media users have spotted something about his diagnosis announcement...

Just for a quick recap, he posted this photo of a discarded doctor glove in a hospital bin. It doesn't seem like anything too out of the ordinary, right?

But, as anyone who follows the actor on Instagram will know...

Tom has a fascination with taking photos of lost and discarded gloves.

His Instagram feed is littered with photographs of singular gloves out in the street...

Or on the beach, in this instance.

And will share photographs of other discarded items, such as socks, pacifiers, shoes, and even lost student IDs.

And, back in 2013, he finally addressed his unusual hobby...

And, during an appearance on CBS This Morning, explained his reasoning behind his fascination with lost and discarded items, saying simply: "I think these are fascinating slices of life."

He can't help but wonder about the story behind these lost pieces of clothing...

He explained his mentality, saying: "It's freezing cold outside, and it's no fun to have a bare hand when it's freezing cold. And yet, someone has lost a glove. That means half their life has disappeared for the course of the day."

And he explained how he sees the gloves as a metaphor...

So, some could see his latest post as a metaphor for his thoughts on his diagnosis...

And his impending loneliness in isolation. Poetry.