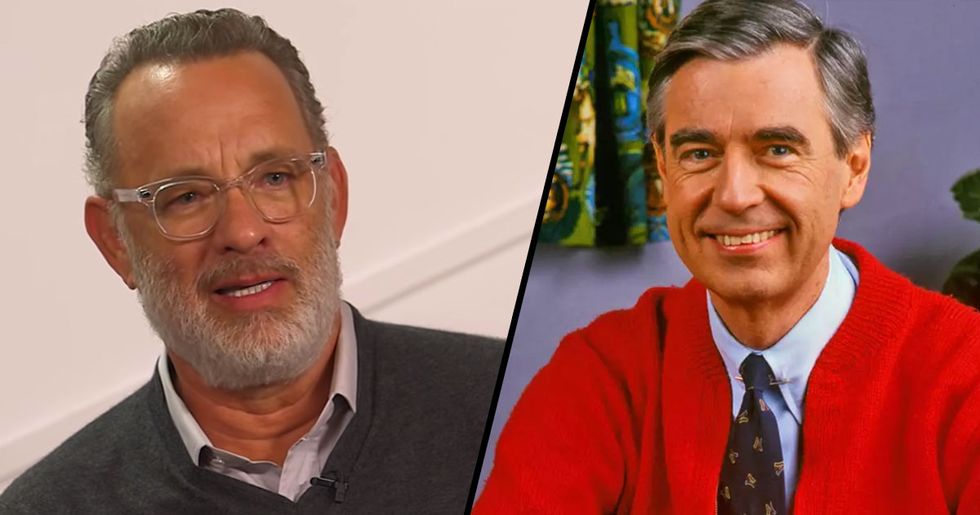 Recently, it was announced that Tom Hanks would be playing Mr. Rogers in an upcoming film called A Beautiful Day in the Neighborhood and the entire world celebrated. The internet is freaking out in the best way and, just by looking at the pictures, we are confident that Hanks is going to nail the role of Mr. Rogers. I mean, is there anything Tom Hanks can't do?

And now, Hanks has received some uber exciting news, while walking the red carpet - and his reaction was adorable.

Well, he's sixty-two years old. But he cannot be stopped.

Who didn't love Cast Away?

Forest Gump taught us all how important it is to run.

It was a love story like nothing else of its time. If you didn't cry in this movie, then you have insane willpower because this one is an emotional roller coaster.

You've Got Mail was the first online love story.

Hanks swept us off our feet and was an instant '90s heartthrob. I was even tempted to start a fan club based on this movie.

Sleepless in Seattle was a classic romantic comedy.

He voiced our childhood in Toy Story.

Growing up and watching Mister Rogers' Neighborhood taught kids about empathy, kindness, and joy. It was the purest television show for kids to watch and left an everlasting impact on those who watched.

The show ended in 2001, after thirty-one amazing and joyful seasons. Every episode highlighted the importance of children and told stories that focused on inclusion and sensitivity towards difficult subjects.

Get ready for A Beautiful Day in the Neighborhood.

With Tom recently gravitating towards playing real-life roles, like Walt Disney in Saving Mr. Banks and Tom Sully in Sully, this might have the potential to be one of his best yet.

It's going to show a new perspective of Mr. Rogers.

Fred Rogers passed away in 2003 at the age of seventy-five. He would have turned ninety-three on March 20, so this wonderful news could not have come at a better time.

And now Tom Hanks has revealed the moment he knew he wanted the role.

And yes, it's as adorable as you'd imagine. He claims he wasn't a Mr. Rogers superfan in his youth, saying "I was too busy watching Rocky and Bullwinkle, and stuff like that."

But that all changed when his friends emailed him a clip of the show.

The clip from a 1981 episode of Mister Rogers’ Neighborhood featured Rogers and a young boy in a wheelchair named Jeffrey Erlanger. The tenderness of the interaction is what converted Hanks.

"Fred is just so wonderfully gentle and present [with] someone who normally would make [most people] feel uncomfortable," Hanks told Vanity Fair. "What do you say to somebody who will spend their life in a wheelchair? He said, ‘Jeff, do you ever have days when you’re feeling sad?’ He says, ‘Well, yeah, sure Mister Rogers. Some days…but not today.’"

"It made me bawl my eyes out."

"It was just so amazing. It’s one of the reasons why I’m in the movie." We guess we owe Hanks' mysterious friend a big thank you!

This week, Hanks attended one of the first screenings of the upcoming movie.

And while walking the red carpet in New York City, he received a pretty exciting surprise.

He was attending the screening with wife, Rita Wilson.

And during his promotional appearance, he was approached by Access Hollywood with some pretty fascinating information.

Hanks was handed a copy of his own family tree.

And on it, it confirmed that he's actually related to the iconic TV presenter he's so successfully portrayed.

It comes from a reputable genealogy site.

And it listed Fred Rogers and Tom Hanks as sixth cousins! They share a common ancestor called Johannes Meffert.

And the pair's reaction was predictably adorable.

"No, impossible. No, you're pulling our leg!" laughed Wilson. Hanks added, "It all just comes together, you see."

Just when we thought this upcoming movie couldn't get any cuter, this happens. A Beautiful Day in the Neighborhood is set to come out this week, and it's safe to say the internet can't wait.