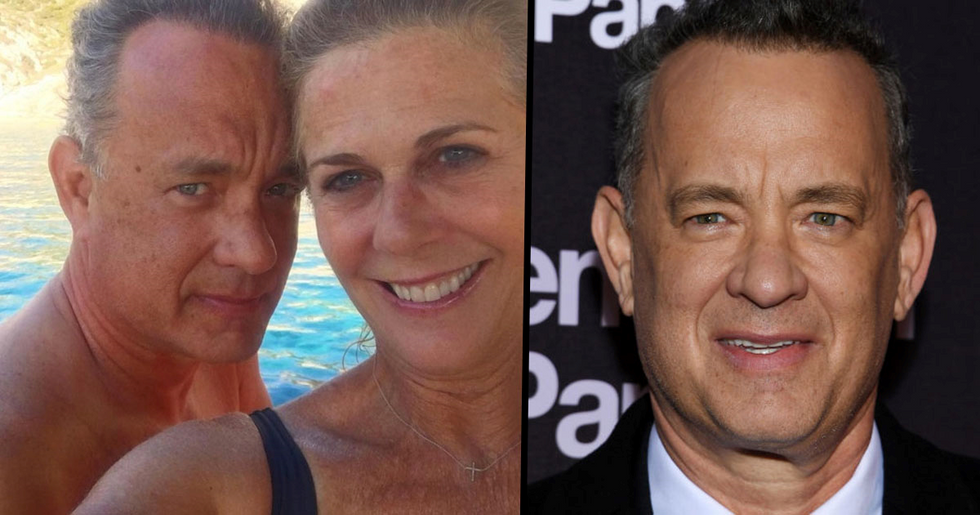 Tom Hanks and Rita Wilson appear to have one of the most solid and loving relationships in the whole of Hollywood.

They always seem to look genuinely happy in each other's company as well as there being that sparkle in their eyes, which lets us all know that they are still hot for one another even after all these years.

We should hate them, but, somehow, it just makes us love them even more.

So, what's the key to their success? How have they stayed faithful and fulfilled when so many others around them have failed?

Well, over the years Hanks has shared little nuggets of wisdom about his relationship and in honor of them celebrating thirty-one years of married bliss this year, we have collated his top 6 rules for a happy life together.

But according to Wilson, there is only one reason that they are still together... keep reading to find out what it is!

Hanks first laid eyes on Wilson when he was just sixteen years old.

She had just made her acting debut on sitcom, The Brady Bunch. With Hanks saying: "I was actually at a friend of mine's house when it aired and I remember thinking 'that girl's cute'".

But he didn't meet her in person until the early '80s.

When he was starring in the sitcom Bosom Buddies. Wilson appeared in one episode alongside Hanks and he has since shared that there was an instant spark between them.

They then continued to work together.

Both starring in the film Volunteers, alongside John Candy. They looked cute together even then.

However, at the time, Hanks was still married to Samantha Lewes, so he and Wilson remained just friends.

Samantha was his college sweetheart and they married at the young age of twenty-two. They had 2 children together, a boy in 1977 and a girl in 1982.

But all was not rosy in their marriage.

@tomhanks Married His High School #Sweetheart Samantha Lewes, With Whom He Had Two Kids, Although They Divorced Aft… https://t.co/Ahu6TySWJ3
— Trading Blvd (@Trading Blvd)1555812021.0

With Hanks later revealing that he was too young and insecure for marriage and that he was not ready to take on the responsibility of children at such a young age. They divorced in 1987 but remained close; Hanks even paid her medical bills when she was diagnosed with cancer.

Hanks and Wilson then went public with their relationship in December 1986.

Hanks was still married to Lewes at the time, but they were separated. Fast work, but we guess when you know it's right, you just go for it.

In April 1988, Hanks and Wilson got married.

Hanks knew that he needed to make some changes to make to the marriage work. Where these changes one of his six rules to a happy marriage? Keep reading to find out!

The couple looked more loved up than ever when Hanks was nominated for his first Oscar for the movie Big.

And it was only two months before this that Hanks had spoken highly of his wife at the Golden Globe Awards, saying: "I married a Greek babe. She's marvelous, thank you, babe, for marrying me." Ahhhhh.

In August 1990, Wilson gave birth to their first child.

Chester Marlon Hanks. Chet, as everyone calls him, has most definitely got the acting bug from his parents, making regular appearances on several TV shows including Shameless and Curb Your Enthusiasm.

And they were back to doing what they did best.

Sharing the screen together! This time, it was in romcom hit, Sleepless in Seattle.  This movie really rocketed Hanks to new heights career-wise and it was, in fact, Wilson who had first introduced him to the work of the director of the movie, Nora Ephron, when she took him on a date to see the movie This Is My Life. So, really, it was thanks to her that he is such a big star today?

Sealed with a kiss.

In March 1994, Hanks won an Oscar for Best Actor for his role in the movie Philadephia. And what was the first thing he did? Kiss his wife, of course! And he dedicated the Oscar to her. Could keeping the passion alive be one of his rules?

As his career continued to flourish, Hanks always made sure to thank his wife for her ongoing support.

When Hanks won an Oscar for Forrest Gump in 1995, he made the sweetest speech: "I am standing here because the woman I share my life with has taught me and demonstrates for me every day just what love is." Ahhh. We are welling up.

But if this is all a bit to soppy for you, his next revelation may help.

In 2001, Hanks told The Oprah Magazine that he saw Wilson as his lover. Not his wife or the mother of his children, but his lover. Now that speaks volumes about their relationship, doesn't it?

Oops, we skipped past the birth of their second child in December 1995!

He was a blessing that clearly brought the two of them even closer together, rather than pushing them apart as is the case with some marriages. Their son, Truman Theodore Hanks, is completely different to his older brother and prefers to stay out of the fame game.

And even with two young kids, they always made time to have fun together.

Like the time when Hanks threatened to wipe his sandy hands on his wife at the Mann Chinese Theatre's hand and footprints ceremony. Rather than getting irritated or worried about her dress as some celebs would, Rita simply laughed it off. Hanks has since said: "We laugh now at two in the morning as much as we always have." Is laughter the key to their success?

And as if being majorly successful actors wasn't enough.

This power couple decided to produce a movie together. And, of course, it was amazing! Clever, funny and sweet all at the same time. My Big Fat Greek Wedding was an instant hit, so much so that they had to make another one!

Maybe it's a case of a couple that works together, stays together?

Hanks and Wilson also produced the hit musical movie, Mama Mia! and the subsequent Mamma Mia! Here We Go Again. Could these two do no wrong? Surely there must be some aspect of their perfect lives that isn't so, well, perfect?

It would appear not!

When their family was photographed in September 2004 at an LA Dodgers game, they all looked to be having so much fun together.

But they always make time for each other as a couple, without their kids.

When Hanks was on a break from shooting his movie, Captain Phillips, he and Wilson took in the sights of Paris together and looked as in love as ever. Romantic mini break... good call.

We loved this photo that Wilson tweeted in July 2014, which showed the family's love of sport as they watched the United States in the World Cup with bated breath.

But, like everyone else, their family is not immune to problems.

Tragedy struck when Wilson was diagnosed with breast cancer in March 2015. She has since shared that she was concerned about how Hanks would react to her diagnosis saying: "You never know how your spouse is going to react in a situation like this."

But, of course, she need not have worried.

As, true to form, Hanks was as caring and supportive as ever. With Wilson saying: "With my husband by my side, and with the love and support of family and friends, I underwent a bilateral mastectomy and reconstruction for breast cancer. I am recovering and most importantly, expected to make a full recovery." And now she supports other people affected by cancer and continues to raise awareness of this terrible disease.

And having celebrated their thirty-one year wedding anniversary this year, they appear happier than ever.

And, yes, we are jealous as hell. Jealous and desperate to know what their secrets are! Well, according to Wilson it's all down to that spark. You've either got it or you haven't. But what does Hanks have to say? Let's take a look!

1. Make sure you are ready for marriage.

As we know, Hanks married his first wife when he was barely out of college and look what happened there. He has since advised others not to be impulsive when it comes to getting married and to wait until you are over thirty years old.

2. Be willing to compromise.

As we said earlier, Hanks knew that he would have to change when he married Wilson. But what we didn't reveal was that he actually changed his entire religion for her. Hanks was a Catholic before he married Wilson but as she was Greek Orthodox, he made the decision to convert to her faith in respect of her family and their religious beliefs.

3. Show your support for your spouse.

Hanks has always been very public in his admiration for his wife; he always thanks her in his speeches and gives her credit where credit is due. Of course, he also showed her the ultimate support when she was diagnosed with cancer, saying at the time: "All I can do is bow down before the courage of my wife." Now we actually do have tears in our eyes!

4. Pay attention to the small stuff.

As well as grand gestures, Hanks and Wilson also make sure that they cherish each other on a day to day basis and do little things to make each other happy. Like Wilson travelling with Hanks when he is filming away. Clearly, the saying "absence makes the heart grow fonder" does not apply to these two.

5. Love each other no matter what.

And last, but definitely not least, rule number six.

Marry the right person. Hanks is often asked about the secrets to a happy marriage and this is his most frequent response: "Just being married to the right woman."

Oh, and it takes a bit of luck too.

"I got lucky with the wonderful Rita Wilson. I'm the luckiest man alive." Well, we can't disagree there Tom! Wilson is one hot mama! And it's clear she only has eyes for you.