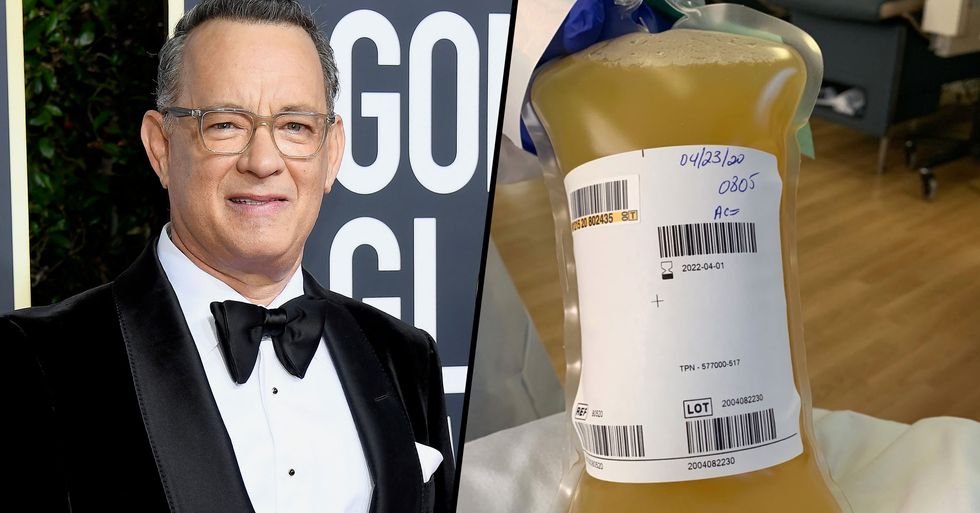 As we all know, Tom Hanks and his wife Rita were among the first people to contract the deadly virus, and since their recovery, they've been using their newfound health to help medical researchers however they can.

Hanks' latest picture has got everyone talking, you might want to put your quarantine snacks down for this one...

"There could be no better ending to this international catastrophe than if the cure turns out to be the blood of Tom Hanks."

Tom Hanks is a man of his word.

@psychicmediumje @tomhanks @arimoin Plasma is like chocolates. You never know whose you’re going to get.
— Joel Nelson (@Joel Nelson)1588189215.0

He continues to offer his assistance in finding a vaccine and has even shared his recent "bag of plasma," with fans. Hanks joked: "I'm not trying to hog it with a copyright or - you know, I'm not going to the patent office."

Both Hanks and his wife Rita promised to donate blood in an effort to help researchers create a vaccine...

The sixty-three-year-old actor, who defied all odds and beat the virus, posted a picture to his 16.7 million followers yesterday.

As gross as the picture might be, it's an essential part of the vaccine process...

Hanks and his wife were among the first who tested positive and recovered from the deadly disease.

It appears that they are putting their new health and energy to incredible use...

And are continuing to offer assistance wherever they can, so more people can recover from the virus. Keep scrolling to take a look at the awful CGI Disney used to cover Daryl Hannah's butt in Splash...