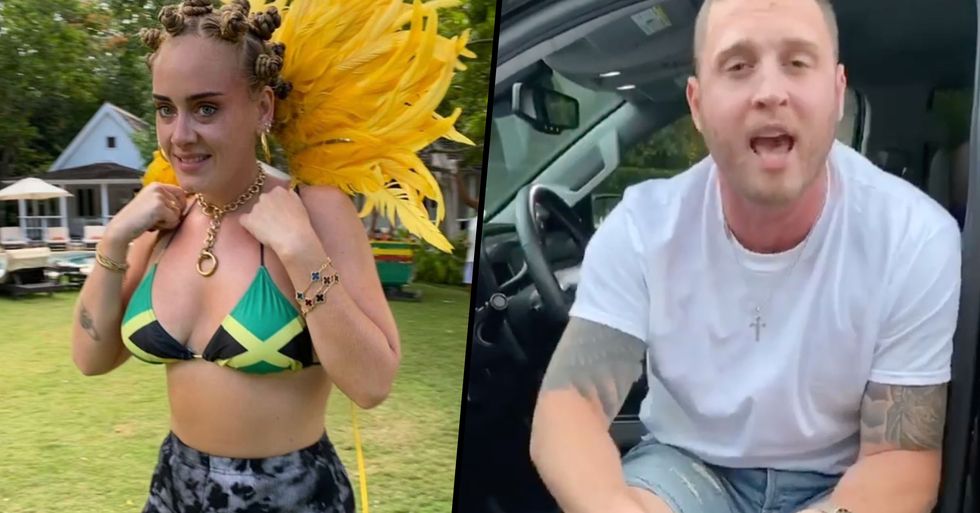 Adele's bikini picture has caused quite the stir on social media over the last few days. But despite fans accusing her of cultural appropriation, some celebrities have shown support for the star.

She's even caught the eye of the most unlikely rapper, and people are a little creeped out...

And it's caught the attention of Tom Hank's son Chet...

Leading to him posting a very awkward response on Instagram.

With many accusing the star of cultural appropriation.

"Happy what would be Notting Hill Carnival my beloved London 🇬🇧🇯🇲", she captioned the picture.

Despite the negative comments from fans, a number of celebrities came forward to support her.

Naomi Campbell was among those to back Adele after the picture caused a backlash.

Adele's bikini picture has brought her a lot more attention than she was expecting.

Including catching the eye of Tom Hanks' son Chet.

The rapper reached out to Adele after seeing her bikini picture.

Chet posted a video of himself dancing to Adele's song Set Fire To The Rain.

Followed by him impersonating a Jamaican accent, telling Adele how good she looked.

Before the video ended, he told her to slide into his DMs. Yikes.

He captioned the clip: "PLEASE SOMEONE TELL ADELE HIT MY LINE ASAP !!!!!!!!!!!! I NEED TO TALK TO HER ABOUT SOMETHING"

Followed by Jamaican flags. People rushed to the comments, to give their own opinion on his post...

For more on Adele, scroll on for the pic that had fans seriously concerned about the star...