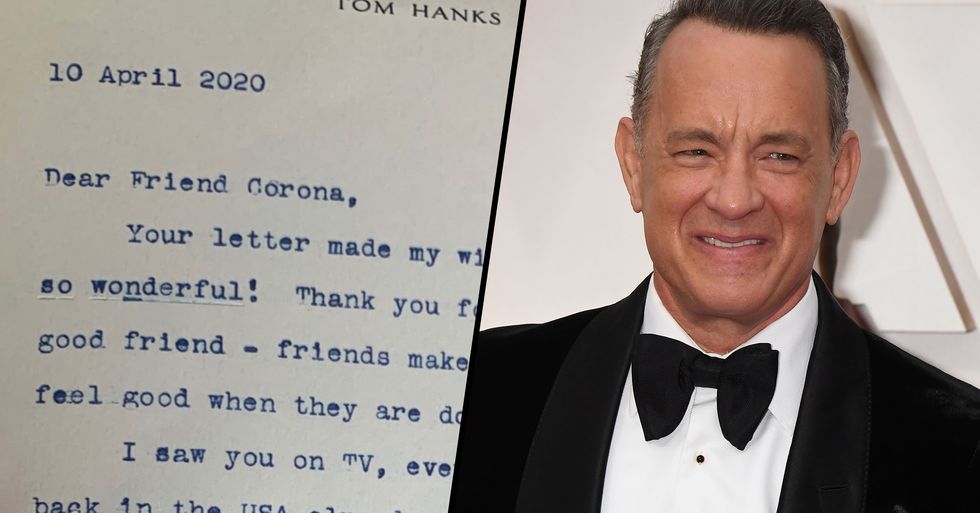 Tom Hanks has offered some comfort to a little boy who has been viciously bullied for his rather unfortunate name.

Keep scrolling for the full story, and to hear what exactly the kind-hearted actor did for the youngster...

Tom Hanks is arguably one of the nicest guys in Hollywood.

As well as being known for his skills and diversity in the world of acting, he is also known for being an overall great guy.

He has starred in an array of Hollywood blockbusters.

Cast Away, Big, Forrest Gump... Just to name a few.

And not to mention his role in the Toy Story franchise.

For decades, Hanks has provided the voice for Woody, making his own voice reknown all over the world.

He has also proven himself behind the cameras.

Hanks has collaborated with the celebrated director, Steven Speilberg on a handful of different projects such as Saving Private Ryan, and The Terminal, and has even established his own production company, Playtone.

Over the years, he has become one of the most celebrated Hollywood figures of our time.

So it only seemed right that he was to be honored with the Lifetime Achievement Award at the 2020 Golden Globes Awards ceremony.

It was a momentous occasion for the actor.

The Hollywood Foreign Press Association (HFPA) said it was "proud" to give the actor the 2020 Cecil B DeMille award at the event on January 5th, and added that they had "grown to love and admire" the sixty-three-year-old.

Tom Hanks has done it all.

And, as well as being loved for his work on screen, the actor is also celebrated for his warm and charismatic demeanor off-screen.

Countless stories of Tom's kind and welcoming personality have emerged over the years...

From donating generously to various charities, to simply being friendly and polite with fans who meet him in real life, Tom has rightly earned himself the title of "nicest guy in Hollywood" over the years.

Hanks is always giving a little something back and, boy, do we love him for it.

But, sadly for the actor...

Despite being honored with the prestigious Golden Globes award...

Hank's year didn't get off to the best start, as he and his wife, Rita, were diagnosed with the deadly virus in March.

The couple had contracted the virus while filming over in Australia...

And they were quickly put into quarantine. But the actor remained in good spirits, and gave regular updates on his Instagram account, where he wrote: "We have [the virus] and are in isolation so we do not spread it to anyone else. There are those for whom it could lead to a very serious illness. We are taking it one-day-at-a-time. There are things we can all do to get through this by following the advice of experts and taking care of ourselves and each other, no? Remember, despite all the current events, there is no crying in baseball."

Hanks kept his worried fans updated throughout his health scare...

And, thankfully, his swift self-isolation efforts paid off, as he announced that he was "feeling better" just 2 weeks after his diagnosis. He has now been cleared of the virus.

Hanks is officially on the mend.

Thankfully, the actor has been able to return to full health, and now, he wants to lend a helping hand to others who have been affected.

Hanks has reached out to a little boy whose life has been drastically changed as a result of the virus... Though he doesn't actually have the virus.

Nope, this little boy shares the same name as the virus and has been subject to vicious bullying as a result. Now that's what you call an unfortunate name...

Corona De Vries, an 8-year-old from Queensland, Australia, has had a pretty tough time during the pandemic.

Because of his unusual name, other children at his school have been bullying him and comparing him to the virus, which has made him "angry and sad."

The little boy decided to write a letter to the actor...

According to Channel Seven, he wrote, “I heard on the news you and your wife had caught the [virus]. Are you OK?" He also told Hanks about the relentless bullying he has been subject to throughout the pandemic.

And, of course, the actor replied.

Typing on his Corona typewriter, which he had taken to Queensland with him for his quarantine, Hanks replied: “Your letter made my wife and I feel so wonderful! Thank you for being such a good friend - Friends make their friends feel good when they are down."

He then complimented his unusual name, saying:

"You know, you are the only person I’ve ever known to have the name Corona – like the ring around the sun, a crown." And, at the end of the letter, Hanks signed off with his hand-written Toy Story phrase, "P.S. You've got a friend in me!"

You can see Tom's letter in full here.

Though it is unknown how the youngster responded to his letter, it will surely put an end to any future bullying. Tom, never change. To read about his advice on a happy marriage, keep scrolling...