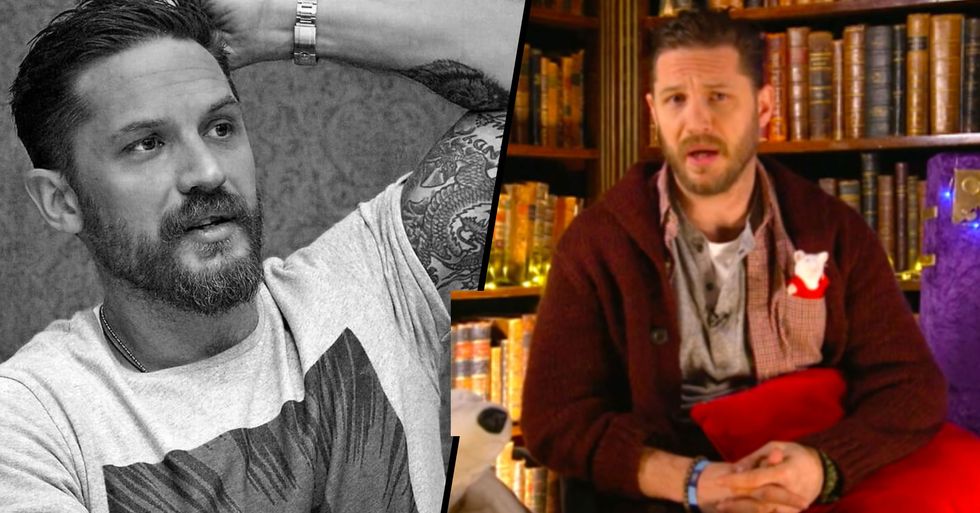 Who doesn't love Tom Hardy? The actor has well and truly stolen the hearts of the nation, and now it seems he's coming to our screens once again in a more unlikely way...

Keep scrolling to find out when to tune in and read some of the hilarious reactions.

The British actor has certainly made a name for himself through his charismatic roles, but these aren't the only reasons why people love him so much.

And that is a reason alone!

But Hardy had a very tough start to life...

The star suffered from alcoholism and drug addiction during his teen and early adult years.

Hardy set his sights on a career on-screen, pursuing acting at the Richmond Drama School followed by the prestigious Drama Centre London.

In a December 2002 interview with IGN, the actor stated, "When other schools would be doing, sort of, 30 hours, we were doing 60. And we'd be doing stuff that would prepare you in a very different way."

But his hard work paid off...

And he stepped into the spotlight for his role in Band Of Brothers  back in 2001.

He's built himself a very successful career on our screens.

But alongside his career as an actor...

Hardy is very passionate about his charity work.

In 2010, Hardy became an ambassador for The Prince's Trust...

The Prince's Trust is the U.K's leading youth charity that works with people between the ages of thirteen-thirty who struggle with many different aspects of life - such as school, addictions, and homelessness.

This is close to the actor's heart...

He is a prime example of a man who, with the right help, battled his addictions and turned his life around.

He has expressed his love for children in the past...

And from his own life experiences, he wants to help disadvantaged children as much as he can.

And of course, he has kids of his own too.

The star has a son, Louis Thomas Hardy, born on April 8, 2008, with ex-girlfriend Rachel Speed. He also has 2 children with his wife, British actress Charlotte Riley.

CBeebies is the BBC children's channel in the U.K. and he made a guest appearance on New Year's Eve to read a story for all the children watching.

It was a total success...

And the star went on to appear and read bedtime stories on the channel several times.

And some of the reactions to the news are hilarious.

The actor is reprising his role on the channel.

The broadcaster announced the exciting news on Wednesday. Keep scrolling to find out when to tune in...

Of course, the whole thing is for the kids.

But that hasn't stopped parents marking their calendars.

Fans are very pleased with the news...

"Thank god for that. Doing his bit for the nation."

Maybe a small percentage of viewers will be kids, at least?

So, when will he be on the channel?

He will be reading every night between April 27 and May 1. In other Tom-related news, he may have just dropped a serious hint about the upcoming Venom 2 movie. Keep scrolling for the story...