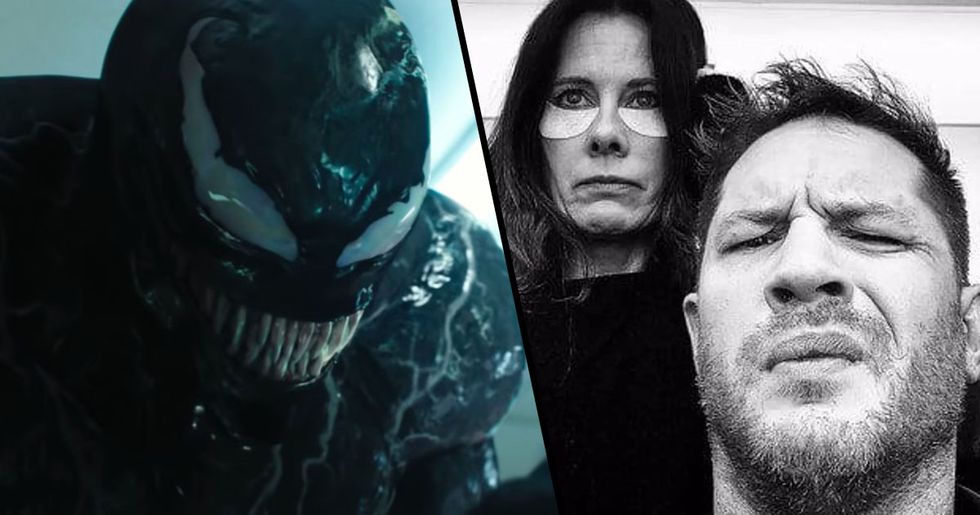 Venom is known to be one of Marvel's most complex characters. The actual anti-hero has had mixed reactions from fans but one thing remains a fact; the self-titled film based on his character was a hit amongst audiences.

We knew a second movie is set to premiere in 2020, but Tom Hardy, the man who plays the host to Venom, Eddie Brock, proved that it was in the works as he recently posted a photo on Instagram showing him on the set of Venom 2. However, he quickly deleted it afterward, which left fans very confused.

Keep scrolling to see the picture that got the internet talking...

Tom Hardy’s Spider-Man spin-off, Venom, was met with a mixed reception when it came out. But, it was also the seventh-highest grossing film of the year, raking in over $850 million in revenue.

Marvel fans have described the character as one of the most complex.

The alien-being acts like a virus, using humans as hosts in order to cause havoc on Earth. However, he plays the villain role in an on-and-off manner as he works to defeat forces even eviler than him.

In simple words, he's an anti-hero.

The weirdest thing about it though is that it needs a "host."

So this extraterrestrial being can't exist without having a human outlet so he selects his victim...

And nothing screams "easy target" more than a failed journalist, right?

Eddie Brock is described as a "broken man" after he loses his job. He wanted to use his writing skills to fight crime and corruption but just ended up having to re-write his resume.

This is what you get for having morals in a job that requires nothing of the sort...

And now, rather than living your life in your dream job, you're out playing with a slimy-looking creature with too many teeth.

Well, he didn't really have a choice, did he?

Venom kind of just forced him into it. Regardless, it made for a good storyline and those who watched the film enjoyed it a lot.

Even though it received lower ratings on Rotten Tomatoes, IMDB gave it a solid 6.7 out of 10.

the only good superhero film is venom because tom hardy is sweaty the entire time and both me and the toothy alien are in love with him
— meg (@meg)1573820763.0

It seems like everyone is a Tom Hardy fan!

I must admit, he played the role well...

But now fans are waiting patiently for Venom 2.

The film is set to be released in 2020 according to IMDB and no synopsis has been provided yet.

But if it's anything like the first film, we're all in for a treat.

The first picture was of a cute little dog in a blue outfit. It was captioned "First day at work good luck mate."

And the second was one of him sat in a chair with a woman behind him...

She had undereye masks on while he posed with a quizzical expression. It was paired with a caption that read: "W3'R'V3N0M2 day one."

You know what that means, right?

It's begun. We are going to be getting some Venom content very soon!

However, as quickly as they were posted, they were removed...

What does this mean? Was it all an accident? Or did he just want to tease us? Can someone give me some answers, please?

Before he could remove all the evidence, some beady-eyed fans managed to capture them.

The pictures are now circulating all over social media platforms with fans getting hyped up for the second film.

Just to add a further twist to the tale, Hardy uploaded 3 more photos.

One of them was the original black and white photo of him and the woman behind him. The other two, however, were new.

Sticking with the dog theme, he opted to post his dog's work pass.

Come on, you can't make it more obvious, can you?! We know filming has begun now, there's no need to be mysterious about it.

The last picture is what we hope, a Venom-related picture...

I mean, I'd recognize those teeth anywhere! It's Venom!

There's one thing I'm glad about...

And it's Tom Hardy being cast for the role of Eddie, yet again. It would not be the same without him. We'll be sure to update you on any further news when we hear about it. Keep your eyes peeled! If you're craving more Marvel movie content, then have a read about how Spider-Man and Venom might be having a cross-over in the future...