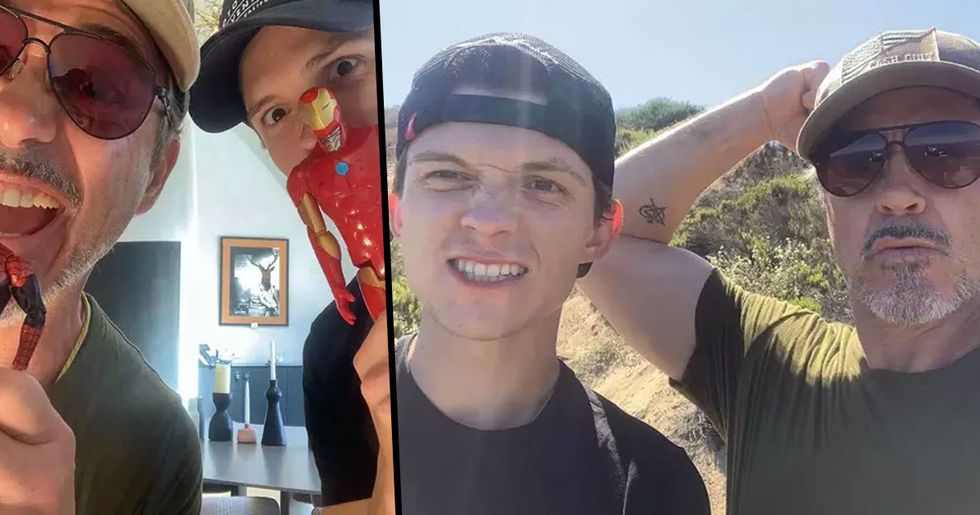 Spider-Man fans were left devastated this week when it was revealed that Tom Holland's run in the role may be coming to a premature end. As Sony and Disney/Marvel seem unable to come to an agreement on their contract, it seems like Spider-Man will be removed from the Avengers franchise - leaving Holland out of a job. The internet was broken-hearted, having loved his performances in the role thus far.

But, now, Holland has hung out with another MCU fan-favorite (and departed hero), Robert Downey Junior. The pair have long cultivated an adorable friendship, and it seems like they're going strong. They shared their reunion with fans on social media, and the images are too cute for words.

The convergence of two classic elements of the Marvel Cinematic Universe was seen as an excellent move - plus, it gave more screen time to the adorable Tom Holland.

Spider-Man has been played by many actors over the years.

But it was young and relatively unknown Brit actor, Tom Holland, who truly brought the role to life. Fans loved his performance and were feeling excited to see more.

But, this week, Holland-fans received some unwelcome news.

It seemed like Holland's time in the role (and Spider-Man's place in the Avengers) was under threat - and may be coming to an end, forever.

It all came down to contracts. Essentially, the character of Spider-Man was owned by Sony - and the Avengers was a Marvel vehicle.

But the two companies couldn't make a deal.

And if they can't come to a compromise? Well, that'll be the end for both Spider-Man and for Tom Holland.

People online were not happy.

The fact that this character was being snatched away from fans simply because of contractual obligations seemed deeply unfair.

And many had this reaction.

It seemed like people wanted to boycott the MCU until they reconsidered their viewpoint.

Because eagle-eyed fans noticed that the star had unfollowed everything associated with Sony on social media - subtly voicing his displeasure with the situation.

The idea of losing Spider-Man was too much for some fans to bear. Particularly after everything that Avengers fans have already been through this year.

Because fans had already suffered a tragic loss.

Arguably the father-figure of the Avengers universe, Iron Man, had his life cut short earlier this year in Avengers: Endgame.

Iron Man and Spider-Man were a force to be reckoned with.

When these two superheroes came together, it seemed like there wasn't much that they couldn't do - and they saved the world together on multiple occasions.

And it seems like the actors are similarly close.

As the pair have spent many days promoting the film franchises together, allowing them to make quite the friendship.

It seems like Downy is charmed by Holland's quirky sense of humor.

The pair are often spotted laughing together at private jokes, and generally being incredibly cute.

When they first met, Downey Jr. was a huge star, while Holland was basically unknown. But, over time, the pair have created more of a level playing field - and fans love them together.

And, this weekend, they really did some fan-service.

The pair shared some adorable selfies together, proving to the world that their friendship runs deeper than any contractual obligations.

They even took this cheeky shot.

The two actors posed with the other's superhero's action figure - showing to the world that Holland will always be Spider-Man to some (including Downey Jr.).

And fans have gone crazy for the images.

After a week of such bleak Marvel-related news, it's such a relief to be handed some adorable, wholesome content. Thanks, guys.

Although others are reading into it more.

Perhaps the fact that the two are posing with these figurines means that the dream of Tom Holland continuing as Spider-Man is not yet over. Please?

And some have pointed this out.

Although Holland has steadfastly refused to comment on the situation with Sony and Disney/Marvel, he has created this post - which is a pretty badass move.

Holland even captioned it: "We did it Mr Stark!" Sob. And, for more information on the Sony Disney/Marvel feud, keep on scrolling. Ryan Reynolds had something pretty emotional to say about it!