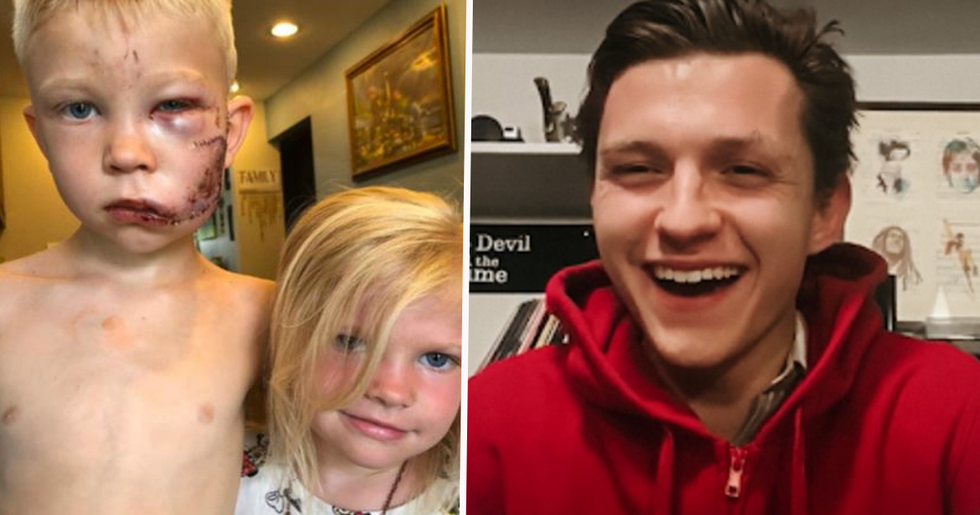 Tom Holland, the real-life Spider-Man, has called the heroic little boy who saved his sister from a dog attack to invite him to the movie set of Spider-Man 3.

Read on for this heartwarming story of bravery...

The clip is adorable.

Sadly, dogs can be unpredictable animals.

Despite being the nation's most loved pet, some dogs can be aggressive and, ultimately, very dangerous.

Neglected dogs tend to be the most unsociable...

And they can cause an unbelievable amount of damage to us humans... especially to children.

Dogs have even been known to cause death in the past...

So when raising children around dogs, it is of the utmost importance to be cautious at all times.

But when one family recently experienced an aggressive stray dog...

A 6-year-old boy showed the most incredible act of kindness by putting himself in harm's way to protect his little sister.

Nikki Walker, who is from Cheyenne, Wyoming, took to social media to tell her nephew's heroic story.

6-year-old Bridger was playing with his sister recently when disaster struck.

What was assumed to be a stray dog came charging over to the children...

And without thinking, Bridger pushed his little sister out of the way and took the full force of the dog himself.

"He, himself, took on the attack so that the dog wouldn’t get his sister. He later said, 'If someone was going to die, I thought it should be me'."

The 6-year-old was immediately taken to the hospital once the dog lost interest...

And even though he was soon discharged, he was left with some serious facial injuries. Click here to see the severity of his wounds.

"After getting bit several times on the face and head, he grabbed his sister's hand and ran with her to keep her safe. After receiving 90 stitches (give or take) from a skilled plastic surgeon, he's finally resting at home. We love our brave boy."

Nikki wants her nephew's story to be shared...

"Please, share my nephew’s story so that it gets as much exposure as it can. We know that our little hero would love some words of encouragement from his favorite heroes," she wrote, alongside tagging the likes of Tom Holland, Chris Hemsworth, Robert Downey Jr., Mark Ruffalo, and Chris Pratt.

Due to the severity of the little boy's injuries...

We have decided to not show photos from the aftermath of the attack - But you can click here if you wish to see them.

Bridger's story has already been shared thousands of times...

And the little boy has been receiving praise from all around the world.

People have been left touched by Bridger's selfless actions...

And the fact he was willing to risk his own life for his sister is truly heartwarming.

It's rare to see acts as selfless as this...

And Bridger's parents have been applauded for doing such a great job in raising their children.

It didn't take long for celebrities to start sharing the story...

Anne Hathaway seemed proud to tell Bridger's story, writing on Instagram: "I’m not an Avenger, but I know a superhero when I see one. I can only hope I’m half as brave in my life as you are in yours, Bridger. Wishing you an easeful recovery, and many cool looking rocks."

She then tagged her friend, Mark Ruffalo, who responded in the best way...

"I truly respect and admire your courage and your heart. Real courage isn't dominating people or fighting against people or walking around like a tough guy. Real courage is knowing what is right to do and doing it even when it might end up hurting you somehow." "You are more of man than many, many I have seen or known. With Admiration… Mark Ruffalo (Bruce Banner/Hulk/Professor)."

And, just to make things even better, a whole array of other celebrities jumped in to commend the 6-year-old.

Octavia Spencer sent her own message, writing: "I'm not an avenger but I know and appreciate them as I appreciate your little hero. Angel hugs for you."

And then, Spider-Man himself weighed in on the story.

Tom Holland decided to reach out to Bridger himself and speak to him over the phone.

And the Spider-Man actor can be heard saying: "I've heard your story, and I just want to say, you're so brave mate! And we are all so proud of you, and your little sister is so lucky to have someone like you."

Holland then asks the heroic little boy who his favorite Avenger is...

And even though Bridger is overcome with shyness, his aunt tells Holland that it is, indeed, Spider-Man.

And when Holland finds out that the little boy was watching Spider-Man Homecoming at the time of the call...

This lights up Bridger's face...

And Holland then tells the little boy he's more than welcome to come and visit him on the set of Spider-Man 3 when they begin filming in a few months.

Now that is the offer of a lifetime!

And we're sure that Bridger will have the most amazing time when he gets to go and visit the set of his favorite superhero.

You can watch Holland's conversation with Bridger here...

A huge well done to this brave little man!