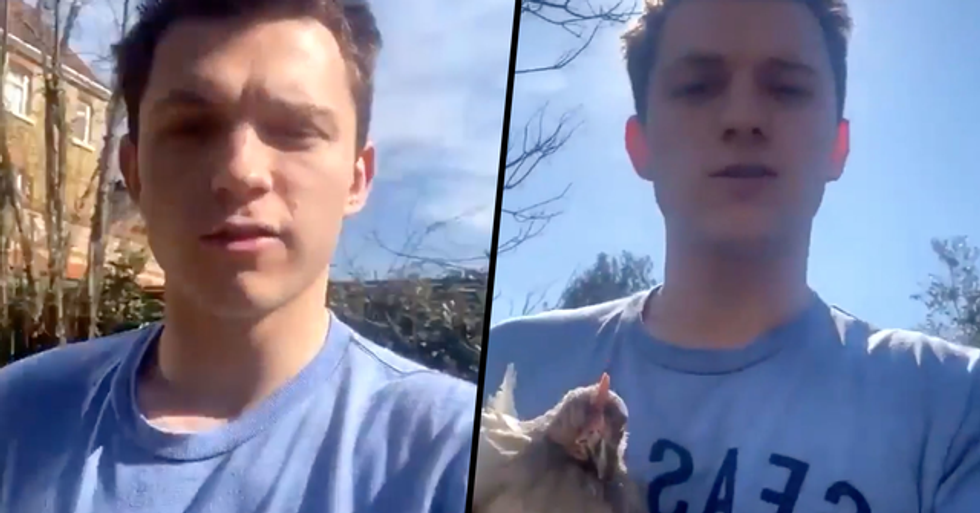 The majority of the world is currently sat in self-isolation amid the deadly COVID-19 outbreak, and some are entertaining themselves in stranger ways than others - Including Marvel star, Tom Holland, who decided to buy 3 live chickens.

Keep scrolling for the full story, and to hear his explanation for his spontaneous purchase yourself...

And, heartwarmingly, he has always been a huge fan of the Spiderman franchise.

It always helps, doesn't it? "I reckon I had thirty SpiderMan costumes over the years since I was a little baby," Holland told The Hollywood Reporter in 2016. "I had Spider-Man bedsheets. 2 years ago, I went to a fancy dress party dressed as Spider-Man and looked like an absolute idiot."

People simply love him and, for many, he simply can do no wrong.

So, his quarantine antics have been welcomed with open arms.

As a result of the COVID-19 pandemic, the majority of the world is currently sitting in self-isolation, and celebrities are faring no differently.

The young actor spontaneously went out and adopted 3 chickens.

Yes, pet chickens. During quarantine. It's a genius idea, isn't it?

As a result of frenzied stockpiling, the actor found himself short on eggs.

So he decided to get eggs the original way... Through chickens. Taking to Instagram Stories, Tom explained: "With everything that's going on, the supermarkets are all empty and there's no eggs - We had no eggs. So we thought, to solve that problem, we would become the source of eggs. And now, we are the owners of chickens."

Incredibly, he has even given his new pets some very suitable names - Predator, Chestnut, and Ranger.

The ONLY celebrity whose quarantine experience matters is Tom Holland because he was out of eggs so he adopted a li… https://t.co/1JRtkHuQrQ
— Taylor Simonds (@Taylor Simonds)1584928287.0

Tom Holland and his pet chickens is the anecdote we never knew we needed.

He is truly the best kind of rich, dumbass celebrity...

It's times like these when our faith in overly-rich celebrities is fully restored.

But, during this pandemic, not all celebrities have been praised for their self-isolation antics. Keep scrolling to read about the backlash regarding Gal Galdot and her A-lister friends' cringe recreation of John Lennon's "Imagine"...