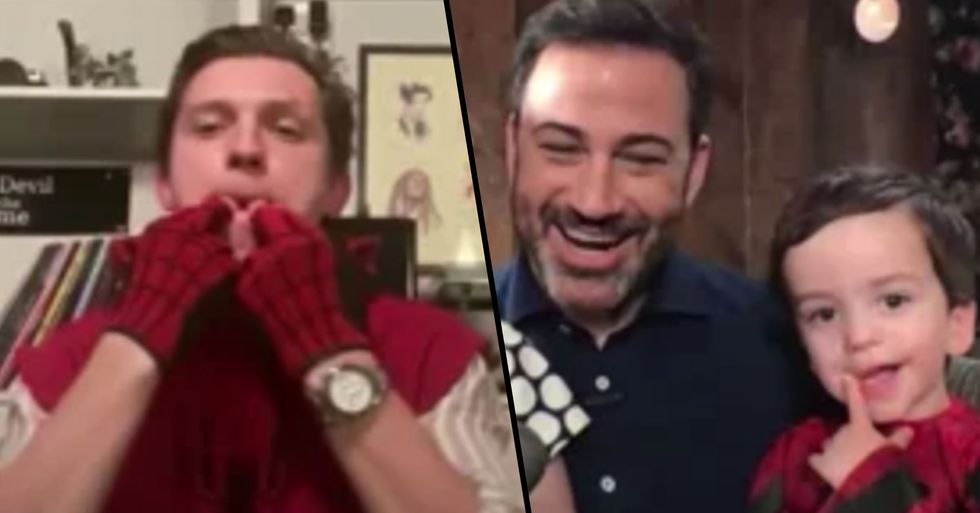 Tom Holland recently made Jimmy Kimmel's 3-year-old son's dream come true by surprising him as SpiderMan on his birthday during the global lockdown.

Keep scrolling to check out his adorable reaction...

Starting as an unknown theater boy from England, Holland was catapulted to unprecedented levels of fame in 2016 after his Marvel debut in Captain America: Civil War.

People simply love him and, for many, he simply can do no wrong.

So, his quarantine antics have been welcomed with open arms.

As a result of the global pandemic, the majority of the world is currently sitting in self-isolation, and celebrities are faring no differently.

The young actor spontaneously went out and adopted 3 chickens.

Yes, pet chickens. During quarantine. It's a genius idea, isn't it?

As a result of frenzied stockpiling, the actor found himself short on eggs.

So he decided to get eggs the original way... Through chickens. Taking to Instagram Stories, Tom explained: "With everything that's going on, the supermarkets are all empty and there are no eggs - We had no eggs. So we thought, to solve that problem, we would become the source of eggs. And now, we are the owners of chickens."

Incredibly, he has even given his new pets some very suitable names - Predator, Chestnut, and Ranger.

And his adorable kindness has yet again gone a long way in his most recent online appearance.

Tom recently made a surprise appearance on a live-stream with Jimmy Kimmel...

And it was all for Jimmy's son, Billy, who is a diehard SpiderMan fan.

And of course, his birthday party plans have been canceled due to the pandemic.

So Jimmy had the best idea to cheer his son up on his birthday...

And that involved SpiderMan himself!

"I have a favor to ask of you and that is this, my son Billy turns three years old today, we watched both of your Spider-Man movies over and over and over again," the host explained to Holland. "And we promised him that the real Spider-Man would come to his party. Now, of course, we were just going to hire a guy in a suit, but now nobody's coming to his party, his party is just us, and I was wondering if you would say hello to him. I can't guarantee it's going to register, but would you mind?"

Naturally, Holland was more than happy to help...

And he quickly changed into his own makeshift red suit to prepare for the big surprise.

Jimmy then brought on Billy, who was wearing his own Spidey Suit, and his big sister Jane...

And they had absolutely no idea what was about to happen... which was the cutest thing!

Jimmy promised his son that the real SpiderMan would come to his birthday party...

"I want you to say hi to someone here," Jimmy told his kids as Holland appeared on screen, wearing his red hood over his face in disguise.

And when Holland removed his mask...

Billy began hiding in his dad's shoulder in excitement...

"Hey Billy! How you doing? My name is Peter Parker and I live in Queens, New York... where do you live?" Holland asked the overwhelmed youngster. But Jane seemed to be doing the most talking, with her replying, "We live in California!"

The group then sang "Happy Birthday" as Billy blew out a candle on his SpiderMan cake.

You can watch the amazing episode here...

And make sure to keep scrolling to read about how Tom Holland challenged Jake Gyllenhaal and Ryan Reynolds to do shirtless handstands...