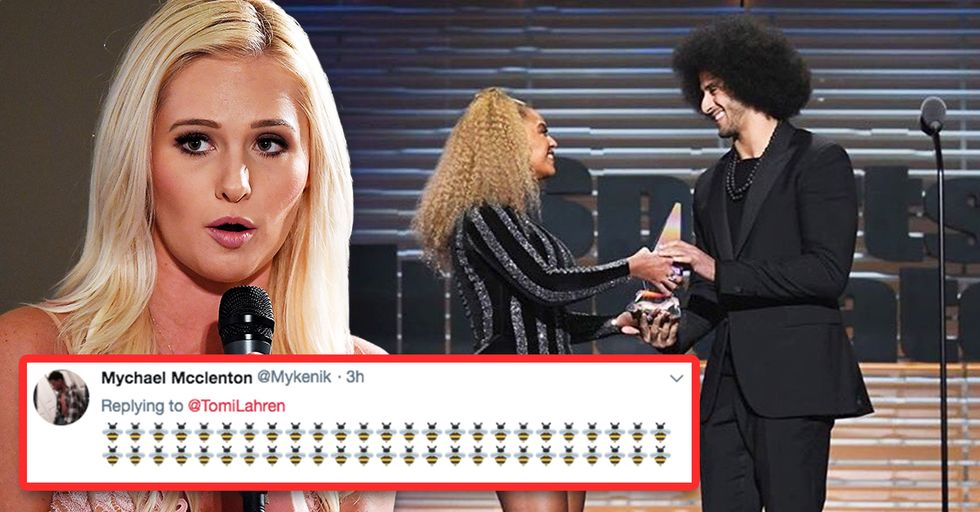 On Tuesday, December 5, the Sports Illustrated Sportsperson of the Year show took place in Brooklyn.

At the show, Colin Kaepernick was presented with a prestigious award: the Muhammad Ali Legacy Award. The award honors athletes who demonstrate "dedication to the ideals of sportsmanship" and those "whose career in athletics has directly or indirectly impacted the world."

To make matters even better, Beyoncé presented him with the award.

It was a beautiful moment.

When Beyoncé and Colin Kaepernick shared the stage, it was almost too much power and coolness to handle. They are both such influential voices in social activism and pop culture today.

Not everyone could handle the greatness that graced the stage that night. Among the people who were too overwhelmed was one Tomi Lahren.

Lahren, as you can see from her above tweet, isn't quite what you'd call a fan of Colin Kaepernick. She's refused to understand what his protests actually stand for, and she shared this weird, awful photoshopped image.

She tweeted about "police-hating Beyoncé" and oh boy did that prove to be a terrible mistake. You just can't bash Beyoncé. You can't! She's objectively good. Let's see what Twitter had to say to Beyoncé-bashing Tomi Lahren...

Of course, people came at her with deliberate misspellings of her name:

Tammy, Toni, Tawny... They're never not funny. Trying to bash Beyoncé may be the most misguided thing Tomi Lahren has ever done. And that's a hard list to top.

Even though Lahren tried to bash Bey, she still spelled her name correctly.

@TomiLahren Glad you used the capital B and accent on the é. Nothing but respect for your President ❤
— Mister Preda (@Mister Preda)1512575281.0

Because you don't do Beyoncé wrong. How much do you want to bet that Tomi Lahren secretly dances to Beyoncé alone in her bedroom every night?

There's one thing that you can never ever forget when you try to come for Beyoncé.

You are lesser than she is. Especially you, Tomi Lahren.

This Twitter user believes she's cracked the code on the real reason for Lahren's hate:

Of course, Beyoncé has it all: a successful career, an entire hive of ride-or-die fans, and her very own health insurance. OH SNAP TRIXIE! What you got?

At the end of the day, there is no rivalry or comparison between Beyoncé and Tomi Lahren.

We are a million percent confident that Tomi Lahren's half-hearted insult didn't even cause a blip on Beyoncé's radar. She was too busy ruling the world.