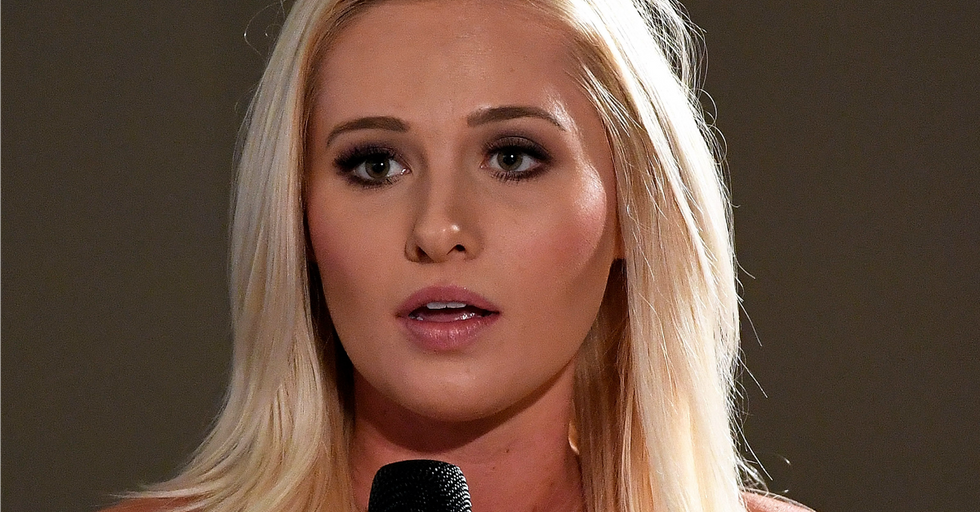 Of the many people you no longer want to see on TV, Tomi Lahren is literally the most pointless. After rising to national prominence with her now-canceled show on The Blaze (via a helpful boost from The Daily Show's Trevor Noah) Lahren has managed to continuously insert herself into the national conversation while never actually offering any kind of substantive analysis.

Case in point, Lahren's recent appearance on Fox News, for which she is a contributor.

Lahren was asked for her reaction to the NFL protest, as well as the recent statement by NFL Commissioner Roger Goodell, who said that he would not force players to stand for the anthem.

In typical fashion, the former Blaze host proceeded to bash Goodell for being spineless, and then stated, "I would like to ask these players – what exactly are you kneeling for and why have you chosen the flag and the anthem to do it?"

Tomi Lahren has been screaming her little spray tanned self into oblivion over Kaep and still doesn’t know what the… https://t.co/41EwX2quPt
— gigi (@gigi)1508417954.0

Great question... Except it has already been answered literally hundreds of times. The answer was first stated by former NFL quarterback Colin Kaepernick in August 2016 when he started the protest. He said, "I am not going to stand up to show pride in a flag for a country that oppresses black people and people of color. To me, this is bigger than football and it would be selfish on my part to look the other way. There are bodies in the street and people getting paid leave and getting away with murder." In the year since, Kaepernick has given interview after interview, as have other athletes that took a knee, including teammate Eric Reid, the first NFL player to join the protest with Kaepernick, who actually wrote an entire op-ed for the New York Times on the matter. Perhaps instead of asking meaningless questions, Ms. Lahren might try her hand at actually analyzing the issue – you know, like a real journalist.