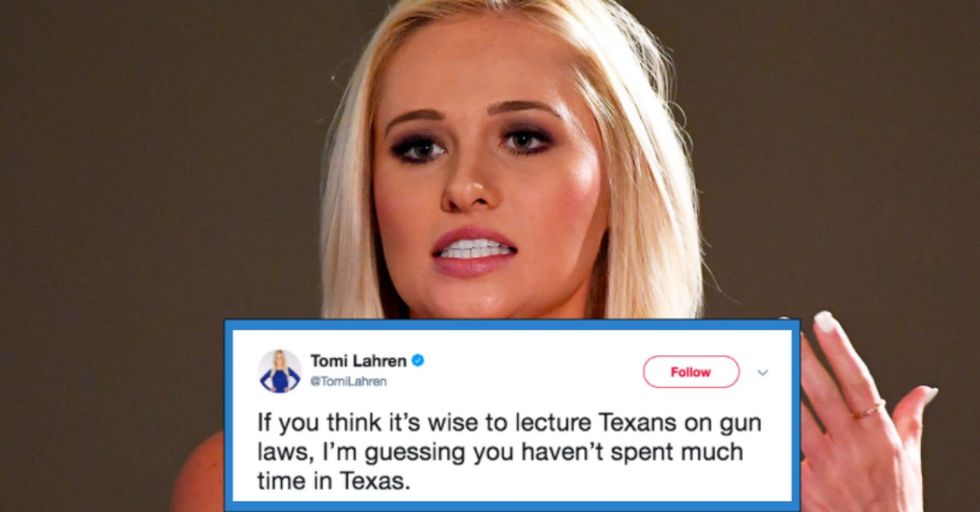 Conservative personality Tomi Lahren is no stranger to saying and doing dumb things. It's actually impressive how often her foot fits squarely into her mouth. When she decided to pipe up about gun control following the tragic mass shooting in a Texas church that left 26 dead, she was swiftly and completely owned by a Texan who did not have time for her divisive hate mongering. It's pretty great.

"Those tweeting about #GunControlNow do you honestly think someone who murders a church full of people gives a flying F about gun laws?" "Didn’t hear liberals asking for a truck ban after last week’s terror attack, yet they think stripping away our gun rights is the answer now." "If you think it’s wise to lecture Texans on gun laws, I’m guessing you haven’t spent much time in Texas." These are just a few of her tweets. To be fair, Lahren has spent a fair amount of time in Texas. She moved there two whole years ago.

Brandon Friedman, the former deputy assistant secretary of public affairs at the U.S. Department of Housing and Urban Development, and a Texan himself, wasn't going to let Lahren speak for him:

"Our gun laws are counterproductive. Try to not speak for an entire state," he tweeted, quoting Lahren's tweet. While Republicans and conservatives like Tomi Lahren are busy chiding "liberals" for "politicizing a tragedy" by bringing up gun control, more people are dying, but you do you, girl.

"Being the good guy with a gun is a selfish hero fantasy for so many 'sheepdogs.' It's not about keeping the flock safe," Friedman continued.

If it were, they'd be focused instead on policy solutions that would stop mass killings before they occur. Like restricting access to guns.
— Brandon Friedman (@Brandon Friedman)1509978803.0

"If it were, they'd be focused instead on policy solutions that would stop mass killings before they occur. Like restricting access to guns." Makes sense, doesn't it?

Of the man who shot at the Texas church shooter in order to stop his rampage, Trump said, "If he didn't have a gun, instead of having 26 dead, you would have had hundreds more." But... but if the shooter wasn't able to get his hands on a gun in the first place, 26 lives would have been saved.

No one stopped this shooting. Even in a state with open carry laws, where guns are a huge part of the culture, a mass shooting was not avoided by a "good guy with a gun." That must mean it doesn't work. That must mean it's time for our policies to change.