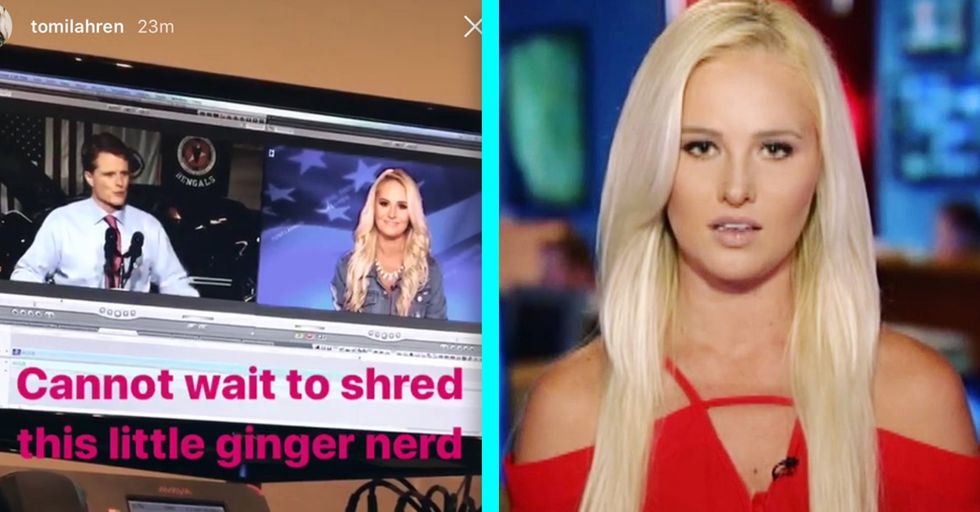 Tomi Lahren isn't what you'd call a happy-go-lucky person. She's pretty much always on a warpath.

Whether she's trying to take down Colin Kaepernick and Beyoncé (honestly how dare she?) or "liberal snowflakes" in general, it almost always backfires in an epic fashion.

Poor Tomi can't seem to criticize anyone successfully, or responsibly, and she proved that once again when she unleashed a social media rant against Democratic Congressman Joe Kennedy III.

Joe Kennedy III, the Congressman from Massachusetts, was chosen to deliver the Democratic response to Donald Trump's State of the Union speech.

For Tomi Lahren, that was already strike one against the guy. In his response, Kennedy denounced Donald Trump and his policies, saying they were "turning American life into a zero-sum game."
Kennedy argued that in Trump's America, someone is always being left behind. Speaking for the Democrats, he said, "As if the mechanic in Pittsburgh and the teacher in Tulsa and the day-care worker in Birmingham are somehow bitter rivals rather than mutual casualties of a system forcefully rigged for those at the top ... The strongest, richest, greatest nation in the world shouldn't leave anyone behind." Those are strong words, and to you and me, who are sane people, it's hard to argue with a more inclusive vision of our nation.

But Tomi Lahren was decidedly not a fan of Kennedy's speech. After his speech, she went on an Instagram story rant about the guy.

"If you haven't yet had the displeasure of watching that little limp d**k's response to President Trump's State of the Union, I suggest you take some Pepto-Bismol or some Midol or whatever you need to do to get through it because it was pathetic and it was embarrassing," she spewed. "Oh my god."

WOW. And she was not done yet.

In this video, she uses her smarmiest voice to say, "Just listen to this little nasty ginger. No no no no no." TOMI. What are you doing, hun?

She simply couldn't help herself. Girl went off the deep end.

She posted this side-by-side comparing Joe Kennedy III to Caitlyn Jenner before deleting it quickly. One has to ask: What was she thinking? The Internet had many a-thought about Tomi's Insta-rant...

This reporter pointed out that Tomi Lahren is a Fox News commentator.

This isn't exactly professional behavior from a news personality. Maybe she forgot for a hot second that she's a contributor to a national news network.

Maria Shriver, a relative of Kennedy's, had some thoughts about Tomi's vitriol.

She offered perhaps the best advice anyone has ever given to Tomi: "Get your kindness on." She's just so angry all the time!

Tomi seemed to recognize the error of her ways because she issued an apology:

And you know what? It's a pretty good apology! She takes responsibility for her actions, apologizes without qualifiers, and that is the last nice thing I'll ever say about Tomi Lahren.

But can I fully forgive Tomi Lahren?

It remains to be seen. She's a big ol' problematic presence in the media. Lahren should have known better. But she's demonstrated again and again that she doesn't. Know better, I mean.