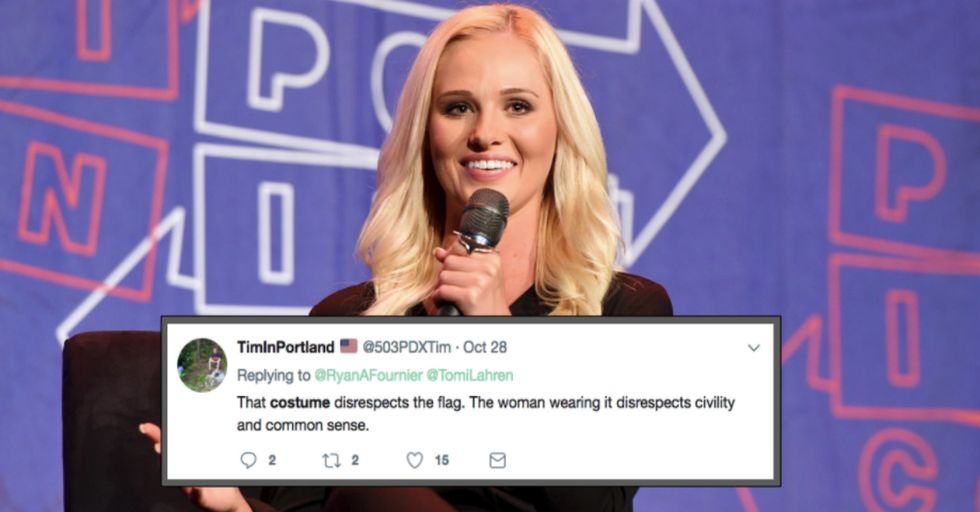 Tomi Lahren is the walking, talking definition of a rabble-rouser - a person who knows what buttons to push to get people outraged. It's a skill she perfected on her now-canceled show Tomi, during which she would do three-minute "final thoughts" segments that were mainly just rants against the liberal media and whatever other topic that had earned her ire. Love her or hate her, Lahren has perfected the art of inflaming people, and she did so again this weekend with her Halloween costume.

On Saturday, Lahren debuted a new look on Instagram.

There was a flag cape, what looked like a blue #MAGA swimsuit, a red tutu, and a flag fanny pack to complete the entire ensemble.

It was, in a word – inflammatory.

Fashion faux-pas aside (girl, nooo to that fanny pack), the entire outfit was calculated to stir outrage and to get people talking.

And get people talking it did.

The tweet had 129.7k likes and nearly 8,000 comments – many of them not flattering. When Ryan Fournier, a conservative spokesperson, retweeted the image on Twitter, the Twittersphere exploded as well.

After all, Lahren is the same Fox News commenter who went on the air to discuss the protesting NFL players and said, "I would like to ask these players: What exactly are you kneeling for?"

In fact, Lahren has had several controversial (read: racist) positions over the years.

She called Black Lives Matter the "new KKK" and said that Beyoncé’s "Formation" performance at the Super Bowl halftime show was “a way to politicize and advance the notion that black lives matter more." Wait, what?! But that wasn't the end of it...

After going on "The Daily Show" with Trevor Noah, she once said, “I am your worst nightmare (liberals). I don’t care what you label me or how many times you come for me. I am fearless and I’m just getting started."

And now, she's using her Halloween costume to poke the bear again. Many people have already commented and posted and retweeted the image.

Even political commentator Keith Olbermann fell for the bait.

He tweeted that Lahren's outfit was in violation of the U.S. flag code... forgetting that he himself is swathed in a flag on the cover of his new book, Trump is F*cking Crazy: (This is Not a Joke). In future, those dealing with Lahren should be wise to heed the immortal words of the internet. "Don't feed the trolls."
Buy Now