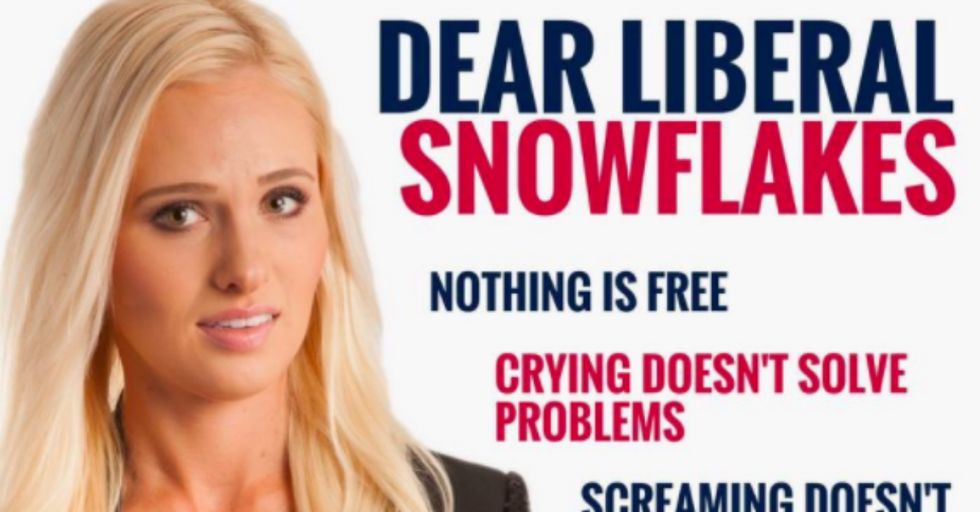 Tomi Lahren has become somewhat of a regular punching bag for anyone who isn't Team Trump. You'd almost feel bad for her if it wasn't for the fact that she says and does dumb stuff, repeatedly, on a consistent basis. Lahren was recently featured on a poster for Turning Point USA, a conservative nonprofit that seeks to "educate" and "train" students about the principles of being a member of the most broken, upside-down political party in American history (though that's not exactly what their website says).

Lahren will be speaking at an upcoming event for Turning Point USA, so they slapped her on a promotional poster addressing "Liberal Snowflakes" — an odd marketing strategy to talk directly to the people you won't be selling tickets to, but that's neither here nor there. What is here is that the poster backfired epically, thanks to the good people on Twitter and their deftness with Photoshop.

Lahren leans to the left (ironically) and has a strange pained expression on her face in this poster. Possibly, she realizes what a grave mistake she's made.

"Dear Liberal Snowflakes," the poster reads. "Nothing is free. Crying doesn't solve problems. Screaming doesn't make you right. Not everyone is a winner. There are no 'safe spaces.'" Wow. Truly a classic instance of self-awareness being tossed out the window like its Republican disdain for pedophiles.

"Um yes, hello, sorry to bother you while you're red in the face screaming about how liberals need 'safe spaces,' but um, weren't you guys, uh, weren't you the ones who wore diapers and sucked on pacifiers on a college campus because you were just so darned offended?" There are a few things babies (like these guys) do...and they conveniently listed them all on their own poster! Babies (Republicans) often cry to try to solve problems, they like to scream until they're right, and while they oppose "safe spaces" for others, they get really upset if they're not allowed to spew their hate without interruption.

Remember yesterday when conservatives got so mad that Keurig stopped sponsoring Sean Hannity that they stomped on their coffee machines until they were broken to make the very odd point that it was totally cool for Hannity to defend a child molester? That's a real adult thing to do. Why, it's not snowflakey at all to throw a temper tantrum and smash your Keurig!

Sometimes, all it takes is a little trim to get to the meat of what really needs to be said:

Turning Point USA had the real message on their poster the whole time. All it took was an eagle-eyed Twitter user to make the necessary edits.

"Dear Snowflakes," she wrote. "You make winter beautiful. You sparkle in the sunlight. You keep animals warm. You give people sledding hills. You are unique. You are one of the world's greatest wonders." The other world's greatest wonder, of course, being how in the universe Turning Point USA thought this poster was a good idea.