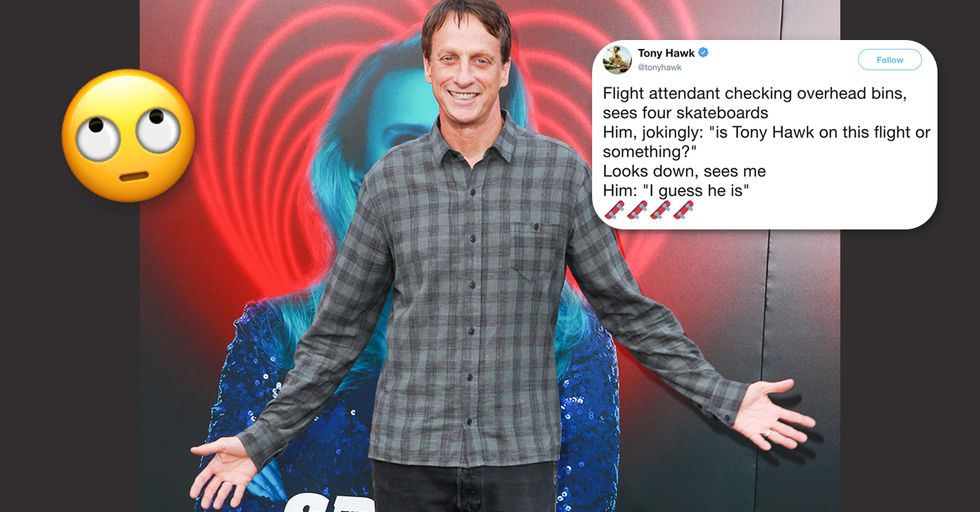 Tony Hawk is the man, the myth, and skateboard legend. The now 50-year-old retired skateboarder resides in Encinitas, CA with his family, where he travels, skates for leisure and speaks at different events. This means he's out in public quite often where people have the chance to interact with and recognize him as a normal human being. But, as always, we humans suck and basically screw up every chance we have to play it cool in front of celebrities.

Thankfully, Hawk shares his hilarious experiences with fans and the average (or below average) humans he meets. Luckily, he laughs off most of his unfortunate encounters, but they often give a good laugh to all his followers and fans.

Do we have any excuses?

Since his fame started at a pretty young age, it seems odd that so many people do not recognize him, or get him mixed up with other celebrities.

Does he ride bikes or skateboards?

Classic mix-up. I wonder if he's gotten this one before? Or if Lance gets mistaken for Tony...

This is a thoughtful approach to asking if a celebrity is they're actually a celebrity. I might try this method.

This guy is good

Sometimes, there are good experiences. And, quite flattering ones.

Irony at its finest

I feel like it's quite common for people to associate a rogue skateboard with Tony Hawk, but how often do we see them then ACTUALLY recognize Tony Hawk?

Who is Anthony Hawk?!

Well, now we know his real name, which will probably confuse even more people.

This probably happens more than we realize. A little passive aggressive, but we all make mistakes. Tony still proves his quick wit.

How could you forget this face?

I mean, look at that hair. He is iconic, then and now.

Some people are just plain rude

If only she knew who she was talking to...

Some people really do recognize him

This guy really knew who he was talking to. Wow, some people go to extreme lengths to get to their celebrity obsession. This guy risked TSA trouble and a pissed off wife. He must be pretty brave.

Other people are a little too late in recognizing the legend, like with this encounter.

This guy would have been left wondering his whole life if he actually saw Tony Hawk. Even Tony wants us to believe the hype.

Sometimes he is recognizable...

...but he's no fool. Giving his number to fans is still a big no-no.

Can you imagine Tom Brady on a skateboard? Quite a laughable picture right there.

Even his daughter is unsure sometimes

His own flesh and blood can't recognize him on the biggest billboards.

People from Iowa seem to be nice

Another flattering mistake. At least they are keeping his memory young. Who knew gas stations could be such a lovely place?

How dare you touch Tony Hawks' skateboard and not even know that it's Tony Hawks'! Geez, some people need to start using their eyes.

You can call him Mr. Awesome

He is quite awesome at something...we just can't quite put our finger on it... Maybe a business card would be helpful.

Yes, his life really is this glamorous.

And this is why we love Tony. The lack of recognition can be a pain in the butt I'm sure, but karma has a way of figuring it all out on its own.

Give this guy some street cred

What does this guy have to do in order to get some recognition around here? Be the first person to ever successfully complete a 900?

I mean, he has a Pop doll

You can't get more famous than this.

He also has a Simpsons cameo

Yeah, he's a big deal. Let's never get him mixed up ever again.

Let's make sure Tony Hawk doesn't have an identity crisis. And if you don't want to be called out on Twitter by the legend, then you better know who he is. Share this with your friends to make sure everyone knows what Tony Hawk looks like, so we never make these mistakes ever again.