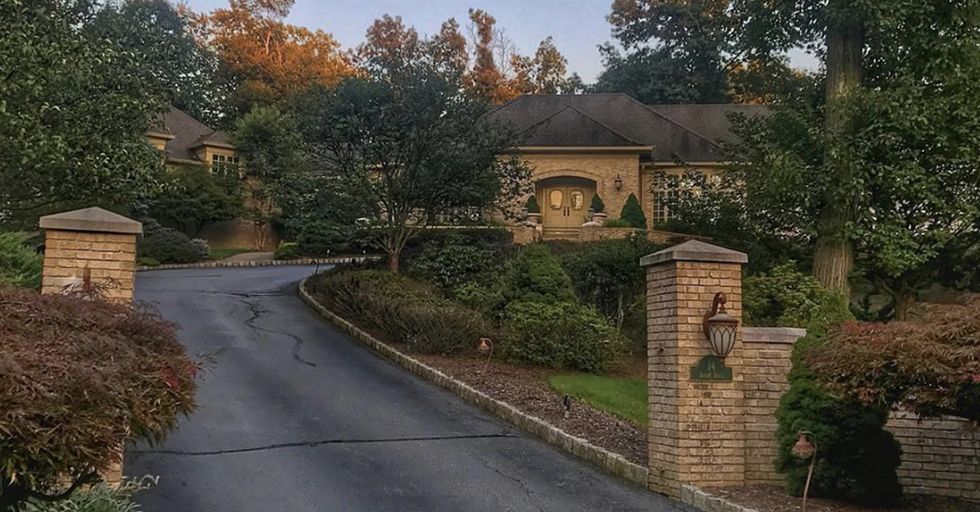 Do you ever feel like you got into something right at the end? That’s how Tony Soprano — a second generation mafioso tasked with running a New Jersey crime family — felt about his job throughout the entire run of HBO's The Sopranos. For Tony, the walls were always closing in, and it was impossible to know if that was because the age of the organized crime was ending or because he had no coping methods for the anxiety that comes with living such an immoral life. If only Tony Soprano could’ve tied up his conscious and thrown it in the trunk, you know what I mean?

And like Tony Soprano always did, the owners of the real-life house in which Tony and his family lived in on The Sopranos have to feel like their time is coming to an end (in a much less morbid way). The couple living in the New Jersey home that stood in for Tony Soprano’s domicile, Patti and Victor Recchia, has put it up for sale.

For some Sopranos fans, the chance to own the house where Tony met those baby ducks and had panic attacks at the grill might be too good to pass up. But there's more to being Tony Soprano than buying his house.

Read on to learn about our plan to not only buy this house but make it pay for itself. And like Tony Soprano's business dealings, it's all completely legitimate.

The Sopranos is maybe the best show of all time.

And to be honest, it's cowardly to use that "maybe." What other show in TV history could pull off scenes as dramatic as Adriana's long car ride with Silvio, or as funny as the entirety of season three's "Pine Barrens?"

For six seasons, we watched Tony Soprano contemplate his life and his morality...

Tony Soprano always knew, on some level, what he was doing was wrong, but a combination of growing up in the world of the mob and a fragile ego kept him from ever making a serious change.

... and also whack the little pricks who wouldn’t pay him no protection.

If there's one thing I know about the mob, it's that you gotta pay 'em their protection. You don't, and bad things'll happen. I don't wanna say what, but bad things, capiche?

The show was about opportunity.

If there was a way to make money, Tony would do it, legality be damned. The guy had his fingers in sports betting, high-end restaurants (Italian, natch), and, at least nominally, waste management.

But it was also about toxic masculinity.

The sudden outbursts of rage and sense of entitlement that came from not just Tony but from every character on The Sopranos are classic signs of men who never learned how to process their feelings or develop empathy.

Tony did his best to be a better person, as evidenced by all those therapy scenes.

Sopranos creator David Chase said the show came to him when he started ruminating on the idea of a mobster going to therapy, and that influence is easy to see on screen, since the Dr. Melfi, Tony's therapist, features heavily into the show from the very first episode.

That's why we both loved and hated Tony Soprano.

In Tony Soprano, we had a character we could revel in, rooting for him to keep making that dough and to shoot anyone who stood in his way. But we could also admire him and his attempts to grow; to become a better man. The world had strong feelings about Tony Soprano, both positive and negative.

(Which, incidentally, is how everyone felt about the show’s ending.)

Maybe the first TV ending to spark the kind of intense conversations we see today whenever any show comes to a close, the final episode of The Sopranos featured a sudden cut to black. And then... nothing. (For the record, it was a stunning, powerful, and beautiful ending about the way life itself never comes to "a satisfying conclusion," but that's an argument for another time.)

What's great about a character as complex as Tony Soprano is that there's a gradient in terms of how much we want to be like him. If shooting a long-time friend for talking to the FBI is too far, we can all agree that it's fun to wear a bathrobe outside.

And today, we can do just that.

I mean, sort of. Some people can. Not everyone. Let's not go crazy.

Now you can buy it.

That's right, the iconic house from The Sopranos has been put up for sale. This is where all the exterior shots were filmed, and unlike most TV houses that use one house for an exterior and then shoot inside a sound-stage, The Sopranos... well, was shot inside a sound-stage too. But that sound-stage was based on the actual interior of the house, so when you come home from work, it really will be like walking into the Sopranos home. You're thinking about buying it, aren't you?

It only costs a cool 3.4 million dollars.

It sounds like a lot, for sure, but consider this — you'd have a home so gorgeous that a mobster would choose to live there. And they can live anywhere! They have a lot of... connections in the real estate business...

Granted, the other homes in the neighborhood go for between 1.5 and 2 million...

Ooh, that is quite a mark-up. But if you're a Sopranos fan who was able to pay the, I don't know, 600 extra dollars a month it cost to have HBO during The Sopranos' heyday, you're probably okay with paying a premium price.

But those other houses weren’t ever on any TV shows.

Rumor has it that the house next door was used for a single shot on NBC's Parenthood, but that show didn't change television, so prospective buyers can still nab it at a discount.

Patti and Victor Recchia are the house's current owners.

Aw, they look like such a nice couple! And so long as they pay their protection, they're gonna stay looking nice, capiche?

The Recchias say they have Sopranos fans stopping by day and night.

People love to see the iconic locations from their favorite TV shows. I live about sixteen miles away from the whorehouse where Don Draper grew up in Mad Men, and I always drive by it on my way to work. I am late every single day.

They all want to take a picture in the driveway with a newspaper in a bathrobe.

You have to imagine most of the folks stopping by are just having some fun dressing up as their favorite mobster, but I do like to imagine that at least some of the people showing up in bathrobes and taking pictures in front of the house have never seen The Sopranos and are just doing it because everyone else is.

Some Sopranos fans even refer to Patti as “Mrs. Soprano."

It would feel strange to be called "Mrs. Soprano" day in and day out, even though Edie Falco turned in one of TV's all-time great performances as Carmella Soprano.

(They did not mention which season Mrs. Soprano they were referring too, though — big difference between season 1 and season 4.)

But maybe it only feels strange because it's unclear whether it's a compliment or an insult? Season one Carmella is weak-willed and small, a person engulfed by her powerful husband. But season four and onward Carmella? She finds her damn self and tells Tony what the hell is up. I want to be that Mrs. Soprano.

Even without the historic TV value, it is an incredible house.

As reported by the New York Times, the house comes complete with, " four bedrooms, four full bathrooms and a powder room; two two-car garages; and a detached one-bedroom guesthouse."

But owning it would still be a hassle.

You’d have Sopranos fans kicking down your door day and night. I mean, no one loves talking TV with other passionate super-fans more than me, but my god, I wouldn't want those passionate super fans in my home. That's where I watch the TV so later on I can talk about it!

Of course, being like Tony Soprano isn’t just about living in his house.

Now, as much fun as it would be to cosplay Tony Soprano every day of your life, it's important to remember that it's not the house that made the man.

It’s about being an entrepreneur.

Tony Soprano was always on top of his business dealings. If you bought this house, you'll have to get creative, business-wise, because that's the only way you'll be able to pay for a 3.4 million dollar New Jersey home.

So you'll have to start charging for pictures.

First, you're going to continue to let Sopranos fans roll by for pictures. But the free ride? That's over with. From now on, these people are paying 20 bucks a pop to take a selfie in front of the Sopranos house.

Then you're going to set up a rack of Sopranos-inspired robes...

Hey, if these pizzolis want to take a snapshot in front of your house, you gotta make it a great experience for them! Have some bathrobes at the ready, so the customers can really get into character. They can change in AJ's room.

And don't forget to hire some goons to keep things running smoothly.

If any of the other families — say, the Lucianos in New York — hear about your racket, they're gonna want in. That's why you've got to put some muscle on the gates.

This house is gonna pay for itself!

It won't be long before you're turning a profit on this house! Then it's time to diversify the revenue stream. Maybe you go scoop up the house from Breaking Bad?

That'll leave you time to kick back by the pool...

With revenue rolling in at a steady clip, you get to relax and enjoy the good life. Go ahead and crack a beer, eat some baked ziti, and get teary about the beautiful baby ducks in your pool.