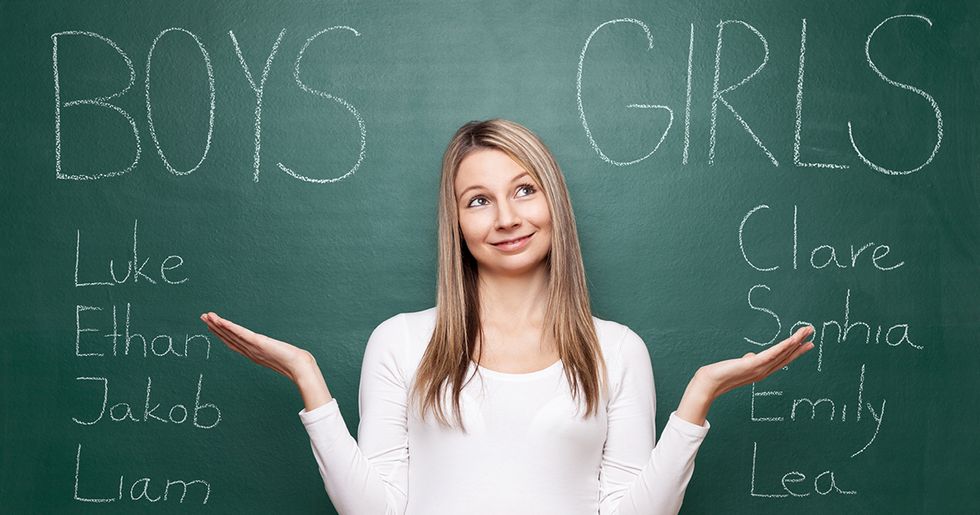 It's always interesting to see what the most popular names for the year are. This is super interesting if you are parents-to-be because whether you want your child to have a popular name or not-so-popular name, this is the place to check to see if the name is on it.

All names are reported to the Social Security Administration, for obvious reasons. And the SSA gathers this data and releases it to the general public.

I like to take it a step farther and see what the meaning is behind a name. This is especially important because names have energy attached to them (don't eye roll me), just think of how words have energy. Names are the same.

Anything goes with names these days, but some people like to stick to what's in style, or may just really like traditional names. Let's take a look at the popular monikers from 2018.

Liam! This name was number 1 on the charts in 2017 as well. Guess you can say people just like it. Plus, it is super easy for kids to learn how to write.

And that name is Emma. I know several Emmas, so will say this is a popular name. It is sweet and simple.

Noah. This boy name was also #2 in 2017. Another simple name that is also biblical. The name Noah means "rest; wandering."

#2 for girls name is Olivia.

There is a variation of this name that is making it's way up slowly on the list, and that is Olive. But for 2018 and 2017, Olivia was still much more popular.

The longer variation of Liam is number 3.

William. Yep, still popular. It's holding strong at #3 and was also ranked third in 2017. This may be contributed to the royal ties this name has.

#3 for girls names ironically only has 3 letters.

AVA that is. Super short, but still very pretty. Easy to say, easy to write. Guess you can see why it is in the top 5 for 2 years in a row.

This name has been around for centuries. In fact, six presidents in history have had the name, James. In 1900, this name was ranked in at #3. You can see, not much has changed for this popular moniker.

Isabella is #4 for popular girl names.

#5 for girls is typically spelled one of two ways.

Sophia is #5. This name is often spelled Sofia and grew in popularity no doubt from the popular kid show, Sofia the First. The origin of the name is Greek and it means, "wisdom."

Most names on this list are one or two syllables, but Benjamin is not. It was also ranked 6th in 2017. This name means "son of my right hand."

I am a bit bias for the little girl name that is ranked 6th on this list. My second daughter has this name and I adore it.

The name is Charlotte. This name has always been pretty popular but grew in popularity in 2015 when Princess Charlotte of Cambridge was introduced to the world.

Lucky #7 for boy names is Elijah.

Another pretty 3-lettered name comes in at #7 for girls.

Mia. This name is so dang cute. It was a top runner of ours when I was pregnant with my second child.  This is a short version of the name, Maria. "Mia is also an Italian word meaning 'mine.'"

We're getting to the end of the list, with only a few names to go.

For boys, #8 in popularity goes to Lucas. Does anyone remember the film, Lucas from the '80s starring Corey Haim? When I hear this name, this is what it reminds me of. Maybe I'm showing my age now.

I am rather surprised by the girl's name that came in at #8.

Amelia is the name. I personally do not know any Amelias. My youngest, however, is really into an Amelia Bedelia book right now. I read it to her every night. This name has been #8 two years in a row!

#9 on the list is losing popularity in the boy group.

And the name is Mason. I know of a Mason and another famous one is part of the Kardashian clan. This name dropped in ranking from 2017, it was #7 then. This name is actually an English occupational name and means "worker in stone."

Another favorite girl name of mine comes in at #9.

The name Harper has been around for quite some time. It too has occupational ties, the name means "harp player."

Closing the top 10 list out, the last name for the boy group is...

And last on the list for the girl group is...

Evelyn. This is a name where the spelling can vary. For example Evalyn. Nicknames include Evie and Eve. This name peaked in popularity in the 1910s. Here we are today and it's still relevant. Now, that's a classical name.

It comes as no surprise that parents sometimes get inspiration in naming their child after watching their favorite TV show.

And a show that everyone seems to be talking about these days is Game of Thrones. I have yet to watch one single episode. I know, I know.

But the data does not lie. Take a look at some of these names American children are being called.

Arya is the most popular name. As I said, I have never watched the show so cannot say if the character is good or not. The name means "noble." I assume she is good then.

It should be noted that two names have fallen off of the SSA list.

Americans have always been a tad obsessed with British royalty.

Prince William and his wife, Duchess Kate have 3 children of their own: George, Charlotte, and Louis. While Charlotte is in the top 10, George and Louis are not. Yet anyway.

And then there's Prince Harry and his wife, Duchess Meghan.

The couple just welcomed their first baby boy into the world and named him, Archie. I know what all of you Riverdale fans are thinking.

Recently, this is the biggest trending news circulating on the interwebs -- what the royal couple named their baby.

Sources say that Archie was the man to get Harry on the front lines in Afganistan.

This was a dream of Harry's. And this man made it come true for him. A true hero. So no ties to a certain character on the hit TV show, but nonetheless, this name surely will rise to fame.

It should also be noted that some names are on the very verge of extinction!

The girl name Claudine, once popular in the '70s, is on its death bed. Same goes for Nanette. I think we can understand why with the latter. It's almost hard to pronounce.

The name Sherwood for boys was once a hit in the 1930s.

But the name, sadly to say, has not been touched since 1963. And where is Waldo? This boy name has died a slow death in the '40s.

That sums it up. As you can see, some names are timeless.

And others, well, others not so much. But Millennial parents like to shake things up, so we'll just have to wait and see what tops the charts in the coming of years.