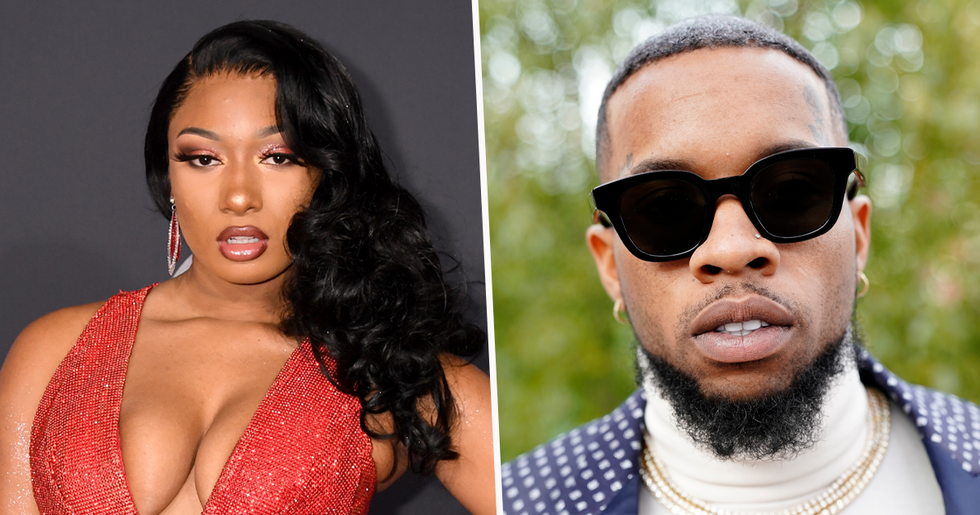 Last weekend, female rapper Megan Thee Stallion was shot in the foot following a violent party in the Hollywood Hills that was attended by Kylie Jenner.

And now, it has emerged that rapper Tory Lanez was the one who allegedly shot Megan...

Here's what we know so far.

There has been a lot of drama in the last few days...

And it's all over Megan Thee Stallion, Tory Lanez, and the one and only Kylie Jenner.

But firstly, who exactly is Megan Thee Stallion?

Megan, whose real name is Megan Jovon Ruth Pete, is a professional rapper, singer, and songwriter who is best known for her singles Make It Hot, Tina Snow, and Suga.

And it's safe to say that she's now very popular.

That recently, the rapper was spotted hanging out with perhaps the most popular woman in Hollywood - Kylie Jenner.

We all know who Kylie Jenner is...

And the young millionaire is no stranger to flaunting her glamorous lifestyle all over social media.

The Keeping Up With The Kardashians star is now one of the most famous women in the world...

And it's safe to say that if you're spotted hanging out with Kylie Jenner, you are officially considered as a socialite.

Kylie has a range of high profile friends...

And it seems that Megan Thee Stallion is now one of them.

Now, this is when we get back to the drama.

Megan attended a party on Sunday at a mansion in the Hollywood Hills, which was also attended by the likes of Kylie and her gang.

It seems that Megan and Kylie were getting on pretty well at the party...

And Megan even took to her Instagram Live to pose for some cute selfies with Kylie in a hot tub.

But things took a dark turn at around 4 am when reports came in of the party turning violent.

Tory Lanez was also at the party.

Tory is a twenty-seven-year-old rapper and he is well known to Megan and her group of friends.

It was reported that Megan left the party in a chauffeur-driven SUV with Tory and her friend, Kelsey Nicole...

And after an argument, Megan had a gun fired near her which hit her in the foot.

And she was immediately taken to the hospital which lead her to issue this statement on her Instagram yesterday. "I suffered gunshot wounds, as a result of a crime that was committed against me and done with the intention to physically harm me. I was never arrested, the police drove me to the hospital where I underwent surgery to remove the bullets."

Fans are confused to say the least...

And when the news of the shooting first broke, people pointed the finger at Kylie who mysteriously vanished just before the commotion.

People were demanding an explanation from Kylie...

And it's clear that people were angry with the young millionaire for being a fine example of "white privilege."

All of the focus was on Kylie...

But what many seemed to be forgetting was that Tory Lanez was the one who was with Megan at the time of the shooting.

And it turns out that Tory was actually more involved than people first realized.

Tory was arrested shortly after Megan was shot and now, it has emerged why.

According to sources at TMZ...

Tory is believed to be the one who opened fire inside the vehicle when Megan and Kelsey were trying to leave following an argument.

Megan is being treated as the victim in this case...

And police are even looking at treating it as a domestic violence case.

Tory was ultimately arrested for possession of a concealed weapon...

Interesting... Kylie unfollowed both Megan Thee Stallion & Tory Lanez.... The one night they all hang out togethe… https://t.co/Ljw7eXmEj9
— WellTheTruthIs (@WellTheTruthIs)1594845527.0

But it's looking like it's going to be a very tricky case due to the fact that witnesses are reportedly not cooperating with the police.

This fact has turned up the heat on Kylie even more...

And many feel that Kylie could really help the case if she spoke out and gave her version of events.

We highly doubt that Kylie will be speaking up any time soon...

And it is currently very unclear as to where Tory stands in his trial so far. We wish Megan a speedy recovery from this terrifying ordeal.