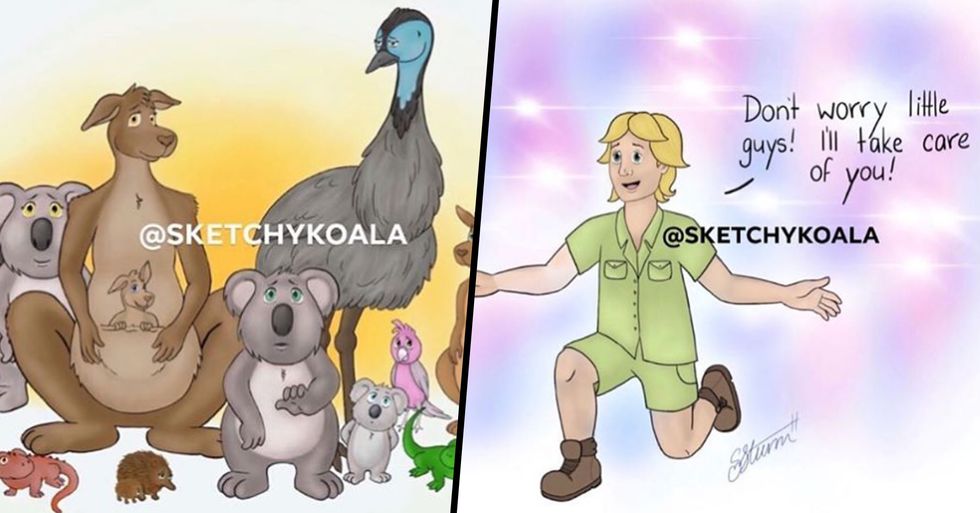 A few days ago, the late Steve Irwin's wife, Terri, and their sixteen-year-old son, Robert, appeared on live TV to discuss the survival chances of their koalas, and Robert simply couldn't hold back his emotion regarding the situation and began to tear up. And in honor of the family, an artist drew a picture showing Steve Irwin welcoming kangaroos, koalas, and other animals into heaven and it has gone viral.

Keep scrolling to catch a glimpse of the touching piece of work.

There have been fires reported in every state, but New South Wales is truly taking a beating by bush fires and is undoubtedly the hardest hit. It's reported that more than 2,200 houses have been destroyed.

It is reported that 130 bush fires continue to burn in populated coastal and inland regions to the city's north.

The country is totally unprepared for the devastation caused to its wildlife. Science for Wildlife executive director Dr Kellie Leigh told the New South Wales upper house inquiry: "We're getting a lot of lessons out of this and it's just showing how unprepared we are. There's no procedures or protocols in place - even wildlife carers don't have protocols for when they can go in after fire."

It's believed that almost two-thirds of koalas in New South Wales alone have perished in the flames.

Tracy Burgess, a volunteer at Wildlife Information, Rescue and Education Services (WIRES), explained how concerning it was that rescuers were not receiving as many animal patients as they expected. "We're not getting that many animals coming into care. So, our concern is that they don't come into care because they're not there anymore, basically," she told Reuters.

And of course, we all remember Lewis the koala who was heroically rescued by a woman using the clothes off her back. Literally.

Now over a billion animals have died.

And the numbers keep on rising as long as the flames are burning.

In homage to the family's remarkable work, an artist decided to dedicate a piece to the late Steve Irwin.

Sharnia-Mae Sturm is a twenty-two-year-old Australian artist who posted a cartoon piece to Instagram and it instantly went viral for it's touching message.

Isn't it just so heartwarming?

However, the bushfire crisis continues...

It is still an undeniably heartbreaking situation, but by working together to help the Aussies combat this natural disaster, we hopefully put it to an end. Our thoughts and prayers are with everyone affected.