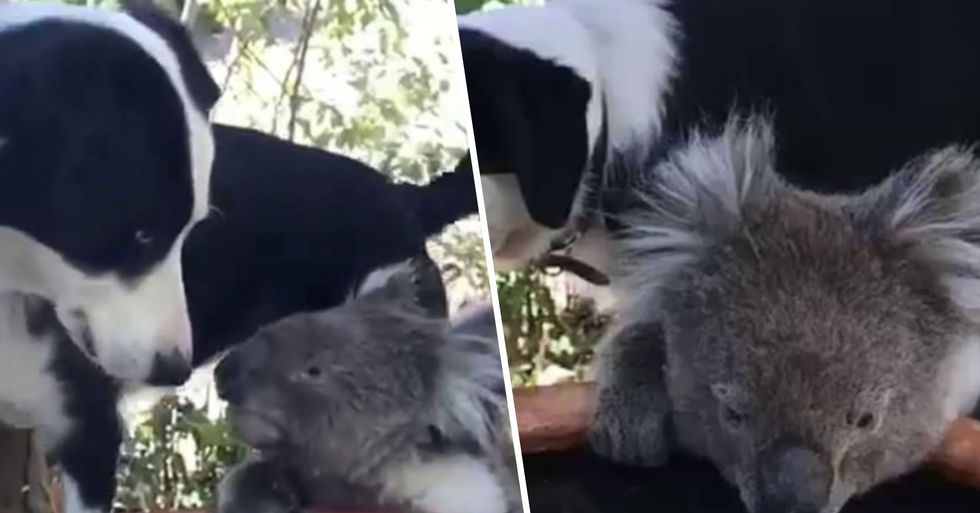 Now over a billion animals have perished in the fires, and lots more injured in animal hospitals.

However, there are some positive moments coming out from the tragic news updates. Keep scrolling for some truly incredible pictures of how the Australian community has come together to save their native animals, including an adorable video showing a dog and koala's instant bond.

The country is facing its worst bushfire crisis in decades, and the results so far have been catastrophic - twenty-nine people have died, over 5,900 buildings have been destroyed, and thousands of people's lives have been changed forever.

Some more koala joeys were rescued from Adelaide Hills...

Adelaide Hills are a pretty dangerous place to be right now, so this little guy was very lucky to be picked up by his rescuers.

Vets all around the country have been working non-stop...

And this koala got very lucky in South Australia.

A wheelbarrow used to it's best advantage...

This koala, who is named Dolly, was very distressed but after a cold bath in a wheelbarrow to cool her feet down, she soon settled down after a drink and some pain relief before being transferred to a koala sanctuary. Keep scrolling to see the cute bond between a dog and Koala.

Rusty the dog has a regular visitor in his backyard in South Australia.

Rusty's owners, the Stone family have given the little koala the name Quasi.

On hot days he comes over to say hi.

The pair seem to share a special bond beneath the trees.

Shielded from the sun.

Quasi takes a quick sip before the pair share a mutual nuzzle.

Quasi is part of the family.

When the Stone family spot Quasi making his way over to the veranda they cut eucalyptus leaves off a nearby tree for him to nibble on.

Danielle Stone says "Rusty doesn't mind sharing the water bowl at all. I think humans could learn a thing or two from this pair." Keep scrolling to see the adorable video.

The heartwarming video was shared on Wednesday.

A friend of the Stone family shared the video.

He wrote, "These two have known each other for several years. Special when you see something like this which is natural and unstaged."

So important to see.

The pair have warmed hearts all across the world, at a time when spirits are low. While the tragedy in Australia continues, it's little moments like this that keep people hopeful for the future.