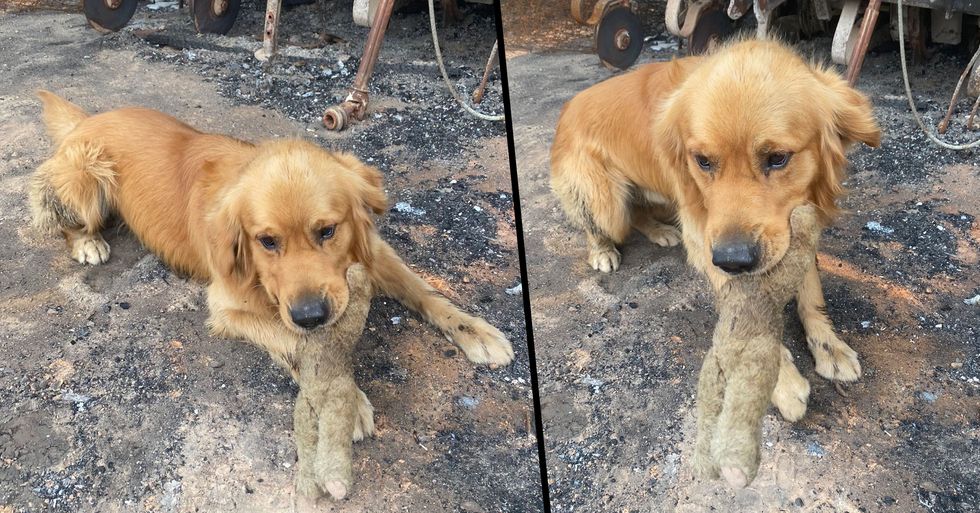 The community has come together to do its best to help the animals in Australia, taking them in and looking after them but ultimately animals including pets have lost their homes.

One dog was taken back to his home after his owners' house burnt down and in a heartwarming moment caught on a photo, he finds his favorite toy.

Keep reading to see the pictures.

The country is facing its worst bushfire crisis in decades, and the results so far have been catastrophic - twenty-nine people have died, over 5,900 buildings have been destroyed, and thousands of people's lives have been changed forever.

A selfless young man went out into the boiling-hot forest to find any vulnerable animals...

And he returned with this little guy!

Some kind volunteer firefighters use their helmet as a make-shift bed...

So many volunteer firefighters have put their lives on the line...

And here's a volunteer in Victoria who just saved a joey.

But whilst some animals were lucky enough to be saved by being taken to a home.

Others were returning home to nothing.

For many, their homes have been completely destroyed by the fires.

Including one family, the Zagami's and their pet dog OJ, who returned to their family home and were not met by much.

The family who live in Wairewa, Australia had their home ravaged by the fires.

And returned to see if they would be able to salvage anything from the wreckage.

But unfortunately, there seemed to be little left that wasn't damaged in the fire.

Everything appeared to be broken or burnt.

Or so they thought...

Until Golden Retriever OJ, spotted something.

Amongst the rubble, OJ managed to spot his stuffed toy.

And the moment was fortunate enough to be captured on camera by Melbourne based 7News reported Louisa Cheatley.

The pictures soon spread, with WeRateDogs tweeting about it saying.

This is OJ. After safely evacuating, him and his family returned to their home in Wairewa, Australia yesterday to f… https://t.co/eOc351m6Ox
— WeRateDogs® (@WeRateDogs®)1579115330.0

"This is OJ. After safely evacuating, he and his family returned to their home in Wairewa, Australia yesterday to find it entirely destroyed by the fires. But amongst the rubble, OJ found his favorite toy had survived. 14/10 never letting it go again."

The response stressed the importance of sharing heartwarming stories like this at a hard time.

Whilst others wanted to help the family, setting up a donation page for them to rebuild their house and buy OJ new toys.

Help that they will need, as according to ABC News the Zagami’s home was one of 11 in Wairewa that was completely burnt down.

As well as their house, they also lost their farm and are expected to be millions out of pocket.

In all the bad that has happened to Australia, hearing things like this helps to bring back some positivity.