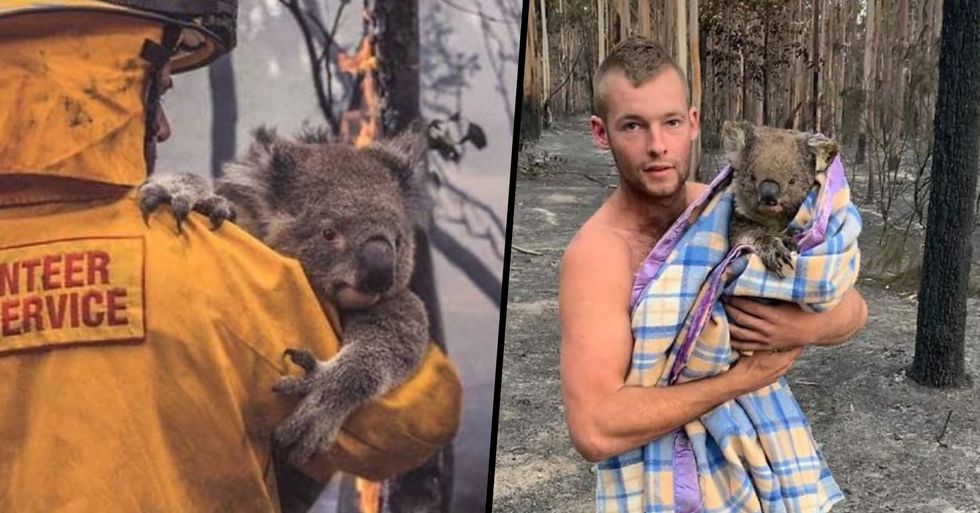 Keep scrolling to see some incredible pictures of how the Australian community have come together to save their native animals...

The country is facing its worst bushfire crisis in decades, and the results so far have been catastrophic - twenty-eight people have died, over 2,000 homes have been destroyed, and thousands of people's lives have been changed forever.

A selfless young man went out into the boiling-hot forest to find any vulnerable animals...

And he returned with this little guy!

Some kind volunteer firefighters use their helmet as a make-shift bed...

So many volunteer firefighters have put their lives on the line...

And here's a volunteer in Victoria who just saved a joey.

Some more koala joeys were rescued from Adelaide Hills...

Adelaide Hills are a pretty dangerous place to be right now, so this little guy was very lucky to be picked up by his rescuers.

Over 600 bats have been transported from caring facilities evacuated in NWS...

The Irwins at Australia Zoo have treated over 100 bats who all deserve a second chance at life.

The Australian Police Force has been doing all they can...

Including providing a refreshing drink for this dehydrated kangaroo.

Vets all around the country have been working non-stop...

And this koala got very lucky in South Australia.

A wheelbarrow used to it's best advantage...

This koala, who is named Dolly, was very distressed but after a cold bath in a wheelbarrow to cool her feet down, she soon settled down after a drink and some pain relief before being transferred to a koala sanctuary.

These women created special blankets for animals in need...

The blankets were used for orphaned bats at the Bat Conservation in NSW.

A joey was left all by himself...

So a travel filmmaker saved him and took him to safety.

This kangaroo is relieved to be rescued...

We have no words for this.

A koala reaches out to its rescuer in a sanctuary...

The Australian community has worked tirelessly to save their wildlife, and they continue to do so. We continue to pray for Australia.