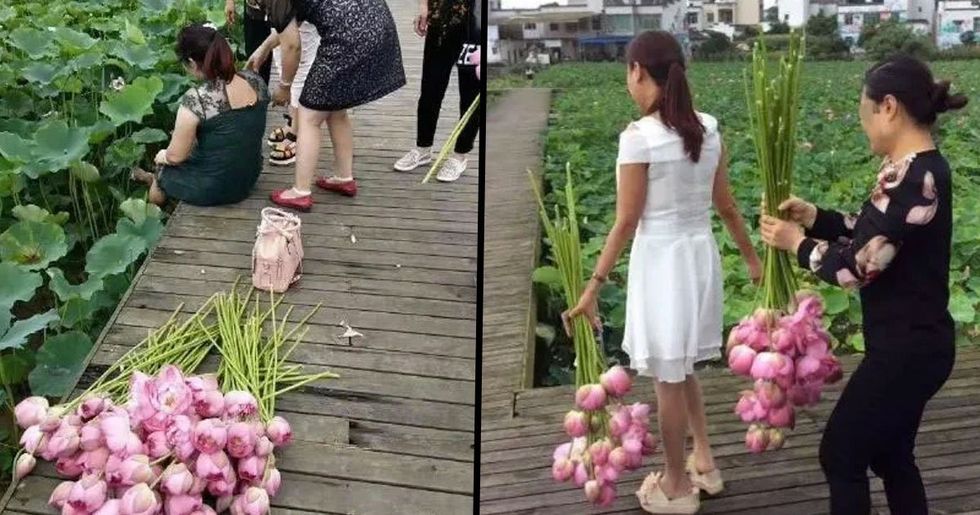 The world is home to many wonderful public parks and recreational spaces. These areas allow people to get back to nature and relax on their days off, and they're simply quite beautiful.

It seems that, nowadays, the public cannot be trusted with anything as things will either get defaced or stolen.

Recently, in China, the general public has provided a firm example of this saddening behavior. Read on to find out the story behind the stolen lotus flowers...

Lotus flowers in bloom are a beautiful sight.

This type of water lily has a wide native distribution, ranging from places such as India, South East Asia, and Northern and Eastern Australia. This is a tropical flower that flourishes in humid temperatures and it is the national flower of India and Vietnam.

In Buddhism, the lotus is symbolic of purity of the body, speech, and mind as, while rooted in the mud, its flowers blossom on long stalks as if floating above the muddy waters of attachment and desire. It is also symbolic of detachment, as drops of water easily slide off its petals.

An eco-park is basically a huge green space - it's a territory that is characterized by the special care needed for the species that inhabit it, whether that's animals or plants. These parks are open for the public to use and enjoy for their own leisure. Plant species such as lotus flowers flourish in these spaces due to the controlled environments.

The park, situated in Sichuan, China, has been made famous for its luscious spaces and beautiful gardens. It is, in fact, one of China's first ecological rural areas.

The park is well known for its beautiful collection of lotus flowers.

At their peak, the flowers cover an area stretching across 25,000 square meters. The park closed temporarily in March for construction work and was due to open again to the public in a few months time.

It brings in hundreds of thousands of tourists every year.

With China being one of the most populated countries in the world, Longquio Park welcomes a vast amount of visitors day in and day out, with the majority of these being Chinese tourists.

And Chinese tourists have developed a bit of a reputation...

Jenny Wang, a Beijing-based Maldives travel agent, said that, usually, uneducated tourists usually turn a blind eye to local rules and customs. And that seems to have been what happened in this story.

"Little or no respect for laws..."

Apparently, Chen suggested that "living in China, where the rule-of-law doesn’t exist, means everyone has to look out for their own interest. It also means people have little or no respect for laws."

We're not sure about that...

But this may explain the actions of the tourists who visited Lonquio Park recently...

During the closure of the park, the unexpected happened...

Members of the public were caught breaking into the park and picking the hundreds of lotus flowers.

Members of the public shamefully carried out the act.

The images began circulating on Chinese social media and the people photographed seemed completely unphased at the fact that they were caught in the act.

We mean, maybe they didn't think that it was wrong...

But, personally, I think that there's nothing quite as disrespectful as breaking and entering and taking things that don't even belong to you. It's called stealing...

Tourists can be seen walking, carrying armfuls of the blossoms...

The tourists aren't even attempting to be discreet with their crimes, they're coming and going as they please, taking whatever they want. An estimated 200 people have been breaking in daily to get their greedy share of the flowers.

As reported by The South China Morning Post, a member of staff named Zhou said: "We cannot control the tourists. We can just guarantee we’ve done our job well."

Nothing is stopping them...

She continued: "We’ve put notes on the park gate and near the flower field and we have security personnel on patrol as well."

The construction work was almost complete.

Zhou added that there was no point in reopening as planned as there are now no flowers left, at all. If this doesn't make you lose your faith in humanity, I don't know what will...

It's sad that people won't be able to enjoy the flowers now.

It's important to be aware of the cultural significance of a place that you're visiting before you take actions like this.

Chen made a plea to the Chinese authorities.

“The Chinese government and travel agencies should take the initiative to educate our tourists," Chen urged.

Incidents such as these need to stop happening, especially when it involves the defacing of the environment. These tourists may not have seen it this way - the flowers are beautiful and I can understand why they may have wanted to take some home - but they have massively slowed down the re-opening of this park and have taken things that do not belong to them.