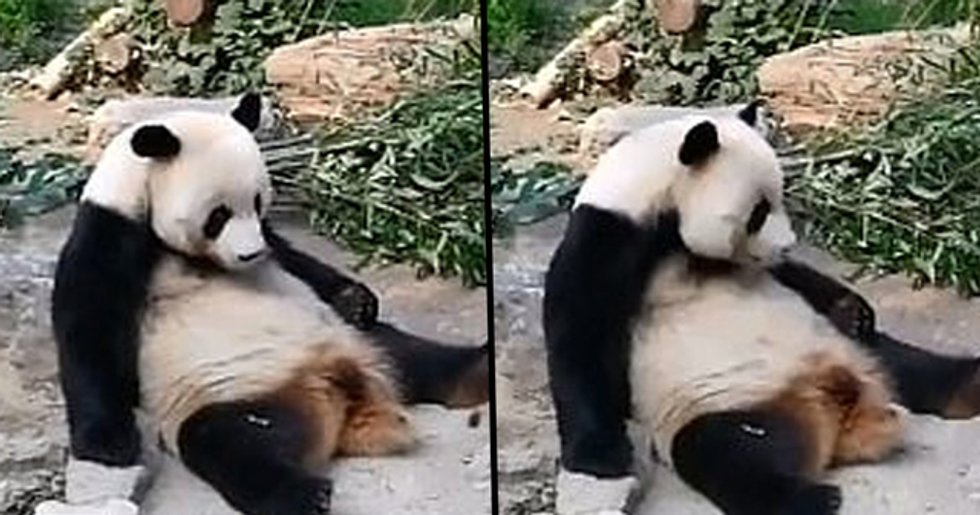 As humans, we have a pretty rough history with our treatment of the planet and of the animals that we share it with. As a species, we are primarily responsible for the potentially irreversible damage done to the Earth, and the thousands of now-extinct species.

And, just when I thought that my expectations of humanity couldn't get any lower, something like this happens.

To add to the growing list of reasons that humans are quite simply trash, footage emerged this week of tourists at the Beijing Zoo in China, hurling rocks at a giant panda while she slept... simply because they were bored and wanted her to do something.

Disgusting, I know. Since the footage went viral, Beijing Zoo has responded and updated us all on the wellbeing of the panda affected.

The giant panda is one of the most endangered bears in the world.

The bears, which are native to China, have suffered a huge population decline in the last few decades, which has mainly been a result of the rapid human population growth across the country.

Their habitat has gradually been destroyed.

One of the main reasons that panda populations have declined is habitat destruction. As the human population in China rapidly grew, pandas’ habitats were taken over by development, pushing them into smaller and less livable areas. Wild giant pandas can now only be found across a handful of mountain ranges in central-western and south-western China.

And, as a result, the number of pandas left in the wild is scarce.

There are now only around 2,000 pandas left in the wild, which qualifies the animal to be considered as vulnerable of extinction by the IUCN.

This habitat destruction has destroyed their main source of food...

Bamboo. Pandas famously feed on bamboo, which blooms several different varieties at different times of the year. If one type of bamboo is destroyed by development, it can leave the pandas with nothing to eat during the time that it normally blooms, increasing the risk of starvation.

More and more pandas are being bred into captivity.

A number of captive breeding programs are underway across the globe, with as many as 500 bears being born into captivity.

And Beijing Zoo is a tourist favorite to see the endangered bears.

With continual development and funding throughout its ninety-year history, Beijing Zoo has become one of the largest zoos in China. It plays home to around 450 different species and has a population of some 5,000 animals.

It attracts many visitors.

Eight million a year, to be precise. And the main attraction of the zoo is, of course, the giant pandas.

The Panda House is the most sought after spot in the zoo.

The first birth of a giant panda in captivity occurred at the Beijing Zoo in 1963, and the first artificial insemination breeding success in the world was achieved at the zoo in 1978. Here, guests can view the adorable bears in an authentic recreation of their natural habitat.

But some guests aren't satisfied with just looking...

There's always one person ready to ruin the experience for everyone else, isn't there?

Footage from the zoo has recently gone viral...

Uploaded onto the Chinese social media platform, Weibo, a video of a sleeping panda being repeatedly harassed with rocks and pebbles has been causing disgust and outrage all over the world.

The incident took place inside the zoo's old Panda Pavilion.

The Pavilion was built in 1989 to celebrate the 1990 Asian Games hosted by the Chinese capital, with the panda becoming the symbol for the event that year.

The video was uploaded by an animal-lover who witnessed the incident.

The thirty-eight-second clip showed the first person's action and the second culprit, who was not filmed, throw a larger piece of rock, the eyewitness told The Beijing News.

The panda was initially sleeping peacefully.

And just doing general panda things... Which is very little, it turns out. This wasn't acceptable for some unseen tourists, however, who began throwing rocks at her, in an attempt to "wake her up."

Though the noise of the flying rocks did startle the creature, who promptly woke up and sniffed around in curiosity.

You can watch the footage here.

Thankfully, the panda was unharmed.

Beijing Zoo has updated us with her wellbeing and has announced that the panda, nicknamed Meng Da, is well and has not been affected by the incident.

A zoo spokesperson claimed that members of staff arrived immediately to stop the visitors from throwing the rocks.

The observer told The Beijing News that the tourists' intention was to wake the panda up. They also mentioned that perhaps the zoo could be doing a bit more to protect their animals from - you know - getting things arbitrarily flung at them when they're not animated enough for some of their visitors' satisfaction.

The zoo claims that changes are going to happen.

They also said that there are plans to renovate the panda enclosure, and added that they would prefer visitors to the zoo to observe the animals in a "civilized" manner. Leaving an animal unprovoked to sleep... it isn't too difficult, is it?

Though this isn't the first time that animals have been provoked in zoos.

There's no forgetting Harambe, is there? Back in 2016, a little boy climbed into the gorilla enclosure in Cincinnati Zoo and was subsequently dragged around by Harambe, a seventeen-year-old Western Lowland gorilla. Harambe was then shot dead, which sparked worldwide outrage and, of course, the hashtag #justiceforharambe.

It highlighted the issue of human interference.

Though zoos do a lot for animal conservation, in particular for the endangered species, there are always the select idiots who insist on taunting and interacting with the animals, just to get a reaction or a good selfie. Many zoos across the world have called for more secure enclosures, not for our safety, but for the animals'. It's our fault that they're there in the first place, right?