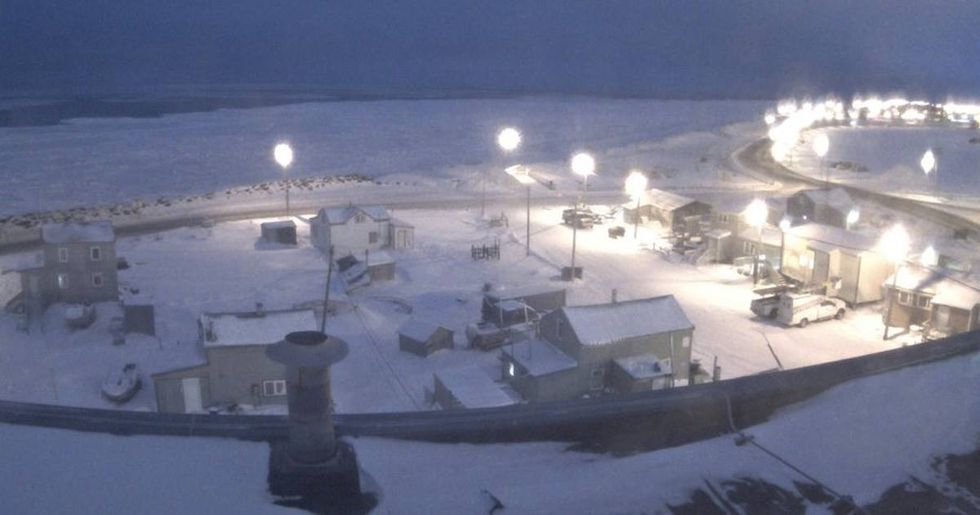 Alaska is one of the most beautful places on earth, that is, if you can see it! One town in Alaska has been plunged into darkness and won't see the sun again until late January.

Utqiaġvik, Alaska, had its last sunrise of the year on Sunday. It's the northernmost US city and it won't see the sun again for 65 days.

This city, which was previously called Barrow, won't see the sun again for 65 days. The next sunrise will appear on January 23.

Utqiaġvik experiences polar night, which is a period of darkness in the winter with no sunrises that occurs in cities inside the polar circles.

According to Weather.com, "From mid-November through late January, the sun doesn't rise north of the Arctic Circle due to the tilt of the Earth away from the sun's most direct radiation." So it's not totally in line with those who believe the Earth is flat.

For those of you who don't know, Alaska is the biggest state in the United States. It is the 4th least populated state.

The United States bought Alaska from Russia on March 30, 1867. What a purchase! It's like the diamond ring on the beautiful hand that is the USA.

Located 330 miles above the Arctic Circle, Utqiaġvik won't be plunged into complete darkness for the next two months. Instead, it will experience "civil twilight," which happens when the sun is 6 degrees below the horizon and creates a little illumination to see things outside.

Civil twilight lasts for six hours a night, but it will decrease to three hours a night by the end of December.

Utqiaġvik's 4,400 residents are used to the polar night. The city is home to a large population of indigenous Iñupiaq people and houses several research stations. After 65 days without sunlight this winter, residents can look forward to 80 days without a sunset starting in May.

Alaska is known for it's incredible wild-life. Incredible and dangerous. The Brown Bear, Black Bear and Polar Bear are allnative to Alaska

Alaska is also home to The Moose which are often hunted for sport.They can grow to almost 7 ft tall.

The film starring Emile Hirsch as "Alexander Supertamp" was filmed in Alaska since the character Emile was playing lived a nomadic life in the state. It was based on a true story.

The fishing and seafood industry is the state's largest private industry employer.

Almost all  of America's salmon, crab, halibut, and herring come from Alaska.

The husky dog is the most popular breed of dog in Alaska, being used as a work dog.

Dog mushing is the official state sport. The Alaska Legislature adopted it in 1972. Huskies are usedto pull the sled.

The state boasts the lowest population density in the nation.

Alaska's most important revenue source is the oil and natural gas industry.

The Tongass National Forest is the largest national forest in the United States.

Alaska's name is based on the Eskimo word Alakshak meaning great lands or peninsula.

Part of the USA

Alaska is known for it's vast and incredible glaciers, the melting of which is a raw topic associated to climate change.

If the time is right, you can see the incredible Northern Lights from certain parts of Alaska. Stunning.

Alaskan's coastline stretches for morekilometres  than the rest of the US combined! Surf's up! But I don't think you'll want to be surfing in the temperatures of these waves.

The perfect climate fo a good old Snow Man build-off...but with the lack of light it's going to be tough to punch them in the face.

A nice little home in which no heating is allowed at all. Sound perfect? Build one the next time you're in Alaska...if the light is right to see what you're doing.

It's time for the population of Utqiaġvik to kiss goodbye to the sun for the time being. No need for the sunglasses anymore, I'm afraid!