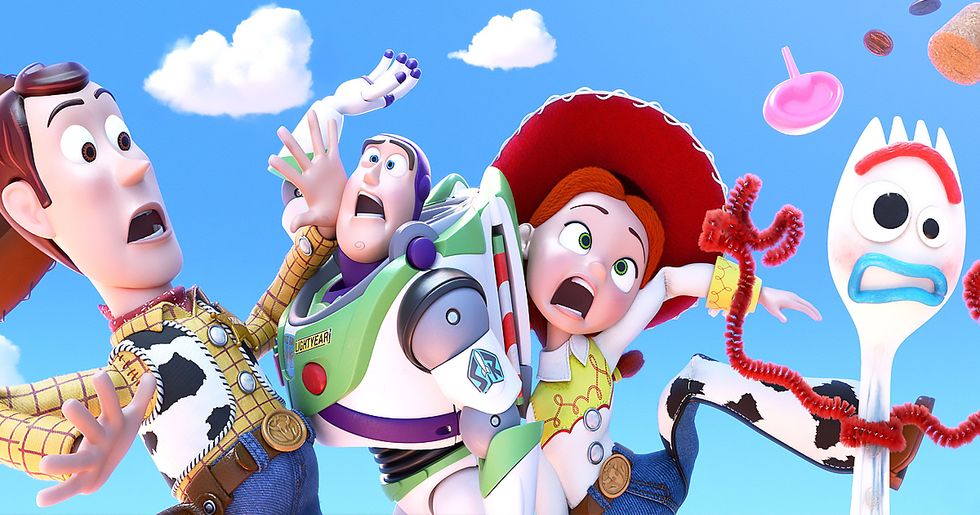 Toy Story 4 is about Woody's quest to make his child, Bonnie, happy. But it's really about accepting reality; about the stories, we tell ourselves; about letting those stories go when they no longer serve us.

But sometimes, movie-goers only see what the movie's about, and what the movie is about goes right over their heads. This is the only possible explanation for a boycott just announced by the Christian group One Million Moms, who are protesting Toy Story 4 over one of the silliest, most outdated reasons we've ever heard. Read on to find out why they've got beef and why it proves how important Toy Story 4's message really is...

Woody had to decide in Toy Story 2 whether he would stay with Andy and be thrown away when he grows up, or be shipped off to a museum and put behind glass. In other words — did he want to live a beautiful, full life and deal someday with the horror of its ending, or live a safe life that could never truly make him happy?

Woody made the heroic choice to stay with Andy, and in Toy Story 3, the promise of horror was fulfilled. Andy did grow up, and Woody and the rest of Andy's toys ended up in a goddamn incinerator. I mean, they survived, but that scene was so traumatic that now I won't even go near the enormous incinerator I have in the center of my home.

Now, with Andy having given him away, Woody has to try and make sense of his life. Toy Story 4 is about moving on, letting go, and building a new life for yourself outside of the narratives we may have been telling ourselves our entire life. It also has a fork-man in it, which is fun.

Toy Story 4 is feelin' isself. It's getting great reviews, and the internet is positively brimming with articles asking if it's the end of the franchise — everyone who walks out of that movie wants more Toy Story.

Because these movies are about something.

There's a reason Toy Story movies always do better than, say, Hotel Transylvania movies — they have something to say about the world they exist in. Woody asks great big questions about life, and purpose, and that resonates with us, deep in our cores.

(The same can be said of Frozen.)

That's why Frozen was such a smash hit too — that movie had something to say. Elsa's story of hiding herself away, only to become enormously powerful when she accepted herself felt personal to anyone feeling the need to hide anything about themselves. Elsa became a powerful symbol to gay people, people with mental illness, and even people who liked the ending of Lost even though people always complain about it all the time.

But the Christian group One Million Moms is not about that Toy Story life.

What they are, about, however, is that religious life. A splinter group from the conservative-leaning American Family Association, One Million Moms saw Toy Story 4 and cried all over their bibles.

The group's put out the call for parents to protest the film.

While they stopped short of asking moms to take to the streets, One Million Moms put up a post on its website warning moms that Toy Story 4 will "blindside" them with a scene that they find "to be so dangerous."

And surprisingly, it's not because Bo Peep and Woody aren't waiting for marriage.

Can't imagine One Million Moms is okay with what Woody and Bo do together at night once the three-headed sheep are asleep and Giggle McDimples is locked back in her compact.

Their issue comes from a scene at the beginning of the film.

Early on, Woody's new kid Bonnie heads off to her first day of kindergarten. There, we see a number of kids being dropped off for school, including one boy... ... who has two moms.

The scene is completely innocuous.

I don't even think the two moms have a line of dialogue. We just see them in the background, dropping off and later picking up their kid. They are entirely forgettable.

And that's what One Million Moms hates about it.

The fact that they're so forgettable is what makes them so memorable, concluded One Million Moms. If gay couples aren't in some kind of spotlight, then, god forbid, we might start to think of them as a normal part of society.

One Million Moms is convinced it will lead to the destruction of the American family.

So what exactly is One Million Moms trying to achieve here?

The group's stated purpose is to "motivate and equip citizens to change the culture to reflect Biblical truth." And since the bible drops as much ink on homosexuality as it does mixed-fabric clothing, One Million Moms will presumably be boycotting The Devil Wears Prada next.

And they do that by going after businesses who swear.

Recently, One Million Moms embarked upon a crusade against Burger King's "Unhappy Meals," which take shots at McDonald's by offering cute little boxed meals focused on unhappy emotions. One Million Mom's complaint? Two of those emotions are "Pissed" and "DGAF." Those words are, of course, naughty, and anyone who says them is a naughty boy who must go to his bedroom.

They have, of course, completely missed Burger King's point.

As we've said before, there's no way God is so petty that he worries about the specific combination of syllables that constitute swear words. I've got to imagine he does care about the trash behavior that comes from suppressing emotions, though!

But hey, One Million Moms did get The Mick canceled!

That's their big win — The Mick, a middle-of-the-road sitcom about a crass, boozing nanny, was canceled after One Million Moms launched a campaign against it. (There is, of course, no evidence that these two events had anything to do with each other.)

Really though, this is all because One Million Moms can't deal with gay people.

We only hate that which we see in ourselves. Otherwise, it just rolls off our backs. So if they're this upset about Toy Story 4, the members of One Million Moms must be having some strong urges when they spend time with their best "friend" Janice.

One Million Moms laid out what it thinks Toy Story 4 should be about.

Never ones to simply scold, One Million Moms didn't just tell Disney what not to do (acknowledge the existence of gay couples). In their post, they offered a handy guide forward, saying, "Disney should stick to entertaining instead of pushing an agenda and exposing children to controversial topics."

One Million Moms is behaving like Woody at the beginning of Toy Story 4.

Woody spent his whole life believing there was nothing more important than being the favorite toy of one special kid, and he did some crazy things (usually jumping out of windows) because of that belief. I know that whoever's running this One Million Moms group has spent their whole life thinking homosexuality was wrong, and this campaign is one of those crazy things they're doing because of that belief.

But the world has changed.

We've come to realize that there's nothing wrong with being gay, that people just love each other and sometimes those people happen to be of the same sex. And instead of accepting that they've been living their lives under a false premise...

After all the progress we've seen happening when it comes to gay couples, we've still got One Million Moms out here with their arms crossed and their noses turned up. It'd almost be impressive if it weren't such a bummer.

It makes me think they walked out of Toy Story 4 the second they saw the same-sex couple.

Remember, that drop-off scene happens very early in the movie. If these million moms stormed out in a huff, they would've missed Toy Story 4's core message — that we can accept and adapt to change, and that it makes our lives better.

They're simply not accepting reality.

It's hard to understand how you could look at the world today, see everyone and everything moving towards inclusion and acceptance, and still be like, "Nah, I think I'm right actually."

The scene was innocuous because same-sex parenting is innocuous.

The inclusion of a lesbian couple is actually a pretty perfect way to demonstrate Pixar's viewpoint on homosexuality — it's so normal as to go unremarked upon.

And seeing it normalized not only does children no harm...

Surprisingly, there were no reports of children vomiting or bleeding out of their eyes after the kindergarten scene in Toy Story 4.

The more kids understand that surface-level differences are neither good nor bad, the more likely they are to be friends with those people, since they haven't been taught that they're an "other." Who's gonna argue with more friends being a good thing? Huh? Huh?

One Million Moms could take a lesson from Toy Story 4.

Woody was certain his viewpoint was correct, but when he found Bo Peep again, he learned it was actually a very small way of seeing the world. I hope One Million Moms can do the same. Wait, nope, we're getting word they're protesting The Lion King because Mufasa shows affection for Simba even though they're both boys.