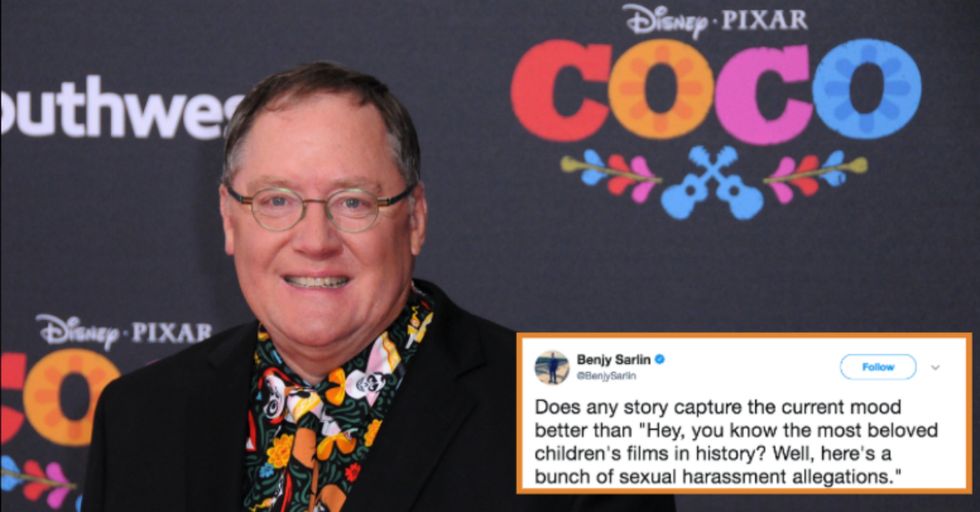 It was going to be a big week for Pixar Animation Studios. This week marks the release of its newest film, Coco — the emotional story of a 12-year-old boy named Miguel who embarks on an adventure to solve a century-old family mystery in the midst of Mexico's Día de los Muertos. Unfortunately, the news of out of Pixar this week is about more than their colorful new film.

John Lasseter — one of Pixar's founders and the man who directed Toy Story, A Bug's Life, and Cars — has taken a voluntary six-month leave of absence amid allegations of "missteps."

The details surrounding Lasseter's "missteps" are unspecified, but we know that they were enough to make Pixar staff members uncomfortable.

Shortly after Lasseter announced that he'd be taking a sabbatical, The Hollywood Reporter published an article saying that Lasseter's behavior at Pixar was marked by "grabbing, kissing, [and] making comments about physical attributes." Most people are assuming that Lasseter made his announcement in order to get ahead of these allegations.

Sources within Pixar said that some women working there knew they'd have to quickly turn their heads away when being greeted by Lasseter in order to avoid receiving a kiss from him.

Some also used a move they called "the Lasseter" to keep their boss' wandering hands in check. "She was bent over and [had her arm] across her thigh," a Pixar insider said to describe a woman using "the Lasseter" technique. "The best I can describe it is as a defensive posture...John had his hand on her knee, though, moving around... [Later], she said it was unfortunate for her to wear a skirt that day and if she didn't have her hand on her own right leg, his hand would have traveled." Call us crazy, but we're pretty sure no one should have to develop defensive maneuvers in order to not get kissed or felt up by their boss.

The same source who witnessed "the Lasseter" move in action also told the story of coming across a strange photo of Lasseter standing between two women.

He noticed that the photo was oddly cropped. When he asked a colleague about it, they said: "We had to crop it. Do you know where his hands were?" Lasseter also gave many unwanted hugs to people at Pixar. "You'd hug him and he'd whisper in your ear, a long time," another source told The Hollywood Reporter. "He hugged and hugged and everyone's looking at you. Just invading the space." A number of former female Pixar employees told Variety that there was a classic "whisper network" surrounding Lasseter and his behavior. Women would hide from him during wrap parties where he was known to get drunk and handsy. One former employee was repeatedly kept out of meetings with Lasseter by her manager who said, "John has a hard time controlling himself around young pretty girls."

Lasseter announced his leave of absence in a lengthy statement sent to all Pixar employees.

It reads, in part: "I’ve recently had a number of difficult conversations that have been very painful for me. It’s never easy to face your missteps, but it’s the only way to learn from them. As a result, I’ve been giving a lot of thought to the leader I am today compared to the mentor, advocate and champion I want to be. It’s been brought to my attention that I have made some of you feel disrespected or uncomfortable. That was never my intent. Collectively, you mean the world to me, and I deeply apologize if I have let you down. I especially want to apologize to anyone who has ever been on the receiving end of an unwanted hug or any other gesture they felt crossed the line in any way, shape, or form. No matter how benign my intent, everyone has the right to set their own boundaries and have them respected."

After the news of Lasseter's misconduct dropped yesterday, there were a few reports linking Rashida Jones to Lasseter's untoward behavior.

Another report from The Hollywood Reporter originally stated that Jones — who co-wrote Toy Story 4 with Will McCormack — left the project after Lasseter made an unwanted advance toward her. Jones later came forward with her own statement on the topic:

Jones clarified that she and McCormack did not leave the film due to unwanted advances from Lasseter.

Rather, Jones and McCormack said in a joint statement provided to the New York Times that they left "because of creative and, more importantly, philosophical differences."

“There is so much talent at Pixar, and we remain enormous fans of their films," Jones and McCormack continued. “However, it is also a culture where women and people of color do not have an equal creative voice. We encourage Pixar to be leaders in bolstering, hiring and promoting more diverse and female storytellers and leaders. We hope we can encourage all those who have felt like their voices could not be heard in the past to feel empowered."

Jones and McCormack will retain a writing credit on the film.

People couldn't help but notice some interesting language in the reports ofLasseter's behavior — including that used within his own statement.

Referring to this sort of behavior as a "misstep" is annoyingly euphemistic. Using softer language like this is one way that people offer excuses for what boils down to inexcusable behavior. Hugging and kissing people who do not want to be hugged or kissed is sexual harassment. Period.

Pixar has long been considered something of a "boys' club" — could Lasseter's behavior partially explain why? Or are his unwanted advances merely a part of the culture?

No one should have to worry about being sexually harassed when they're simply trying to do a job. But when people like Lasseter remain in power, it forces women to constantly have to balance the importance of their careers with the desire to not be kissed or fondled at work. And that is obviously not OK.

These endless allegations are really becoming exhausting at this point.

We know you may be of reading story after story of sexual harassment and assault and misconduct and "missteps." But just think of how tired the women are who have to deal with those behaviors on a daily basis. We're willing to be it's significantly more exhausting than having to read yet another article detailing their stories.

People are also commenting on the timing of Lasseter's self-induced sabbatical.

The people at Pixar — the ones who aren't sexually harassing their co-workers, in particular — are proud of the film they've made, and they deserve to be lauded for their work. Especially since it seems they had to do it in such a hostile environment.