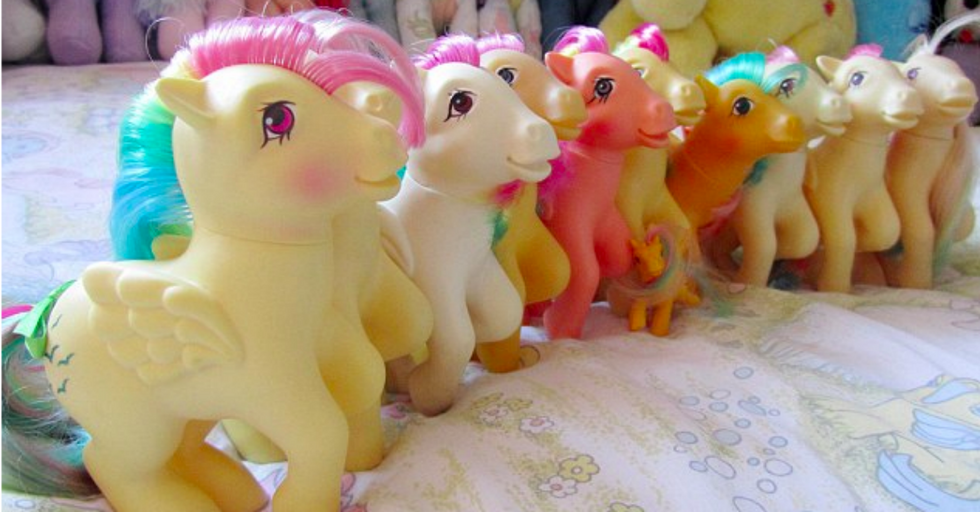 I met my next door neighbor and future best friend in 1994 when we were five years old. The first time we ever had a play date, she walked into my house, looked around, and said, "My toys are way better than your toys."

I have since forgiven her, and we have moved past this. But I have not forgotten. In the '90s, there were certain toys that every girl was obsessed with. If you had them, you were cool. If you didn't, you made friends with someone cool so you could play with all their toys.

These were the most coveted toys for every girl in the '90s. How many did you have?

If you set aside the health concerns that went along with having a light bulb cook your baked goods (and you did), the Easy-Bake Oven was the pinnacle of cool toys in the '90s. I'm a 27-year-old woman, and I'm still upset I never got one.

You fed it, then forgot to feed it, then it died. The Tamagotchi was a harsh lesson in reality disguised as fun.

My Size Barbie was three feet tall, you could dress her up in outfits and she came alive every night and watched you sleep. Just a theory.

If you wanted to be a cool girl in the '90s, you couldn't have a Beanie Baby. You needed to have at least a small army's worth of them. Bonus points if you snagged a Princess Diana bear. While they didn't end up quite as valuable as some hoped, they were priceless currency in circles of '90s preteens.

In the '90s, there were no custom American Girl Dolls. You couldn't choose specific features to get one that looked just like you. There were a group of girls, each with a specific backstory, and unless you had a wild imagination, you chose the one you that you sort of resembled. I had Molly because she had brown hair and glasses and so did I.

My best friend had a Barbie Jeep and we painted the town in that thing. I've been driving a real car every day for 11 years and I would still love to take a spin in one of those things.

Furbies were gremlins for kids who hadn't seen Gremlins. If you got them wet, they wouldn't turn into scary monsters, but they probably wouldn't work very well.

A game of which the object is to put on as much jewelry as possible? A-yeah! This game was genius.

Puppy Surprise had everything: puppies, surprises... ...that's it. But that's all a '90s girl ever needed.

She danced on her own, which was technologically incredible for the '90s, and she was a ballerina! Every girl in the '90s took ballet whether we wanted to or not. I lasted a year.

Polly Pockets were the most fun you could have with serious choking hazards. Somehow the pitch, "Let's make doll houses for little kids, but everything is suuuuuper tiny!" got approved.

Sky Dancers were amazing. They lifted right off their stands and floated in the air before getting too close to your head and getting tangled in your hair so badly that your mom had to cut them out with scissors. Ah, memories.

Skipping was a regular mode of transportation for all '90s gals. So it was only natural that toymakers decided to add to the mix a hard plastic ball that was tethered to your leg. What could possibly go wrong? JK, Skip Its were the bomb.

You had to be a real artist to master Lite-Brite. Sure, anyone could follow the patterns they provided, but once you slipped that blank, black sheet in there, it was your turn to illuminate your own bright idea. (In case you couldn't tell, I was terrible at Lite-Brite).

In the '90s, you could always count on one thing: If there was a gender-neutral-to-slightly-male-leaning toy on the market, the pink girly version wasn't far behind. So when the Talkboy and Talkgirl came out, you better believe every girl was clamoring for that pink tape recorder.

Girls in the '90s loved playing mom. And with Quints, we finally got to live out our preteen fantasy of being the exhausted, overburdened woman in charge of five little ones. Yay.

Doodle Bear was a teddy bear that you could draw on. According to the packaging, the markers would wash off so you could start drawing all over again, but that was a lie. Once you marked it up, it was doodled forever.

A board game where you had to go shopping was almost as great as actually going shopping. Plus, the fake credit cards and money were so fun to play with on their own.

Looking back, Dream Phone, the game where you had to call up 24 different guys, listen to clues, and guess who the Secret Admirer is, was a bit — how do I say this — awful. But it came with a fake phone, and if you were a girl in the '90s, all you ever wanted was your own phone.

There was one for every movie, and they were great. We probably all wrecked our eyesight squinting at those tiny screens, but man was it worth it.

If you looked at a Barbie doll and thought, "You know what her whole body is missing? JEWELS!" then Lil Miss Magic Jewels was for you. You used a wand to add jewels to her dress, her crown, her hair, your hair, the dog, your dad while he was sleeping, the other dog, your mom while she was talking on the phone with her friend Donna, your little brother. EVERYTHING. It was the best.

These weird little dolls were everywhere in the '90s. You probably didn't remember buying them or wanting them, but there were definitely a bunch in your house. They had rainbow hair that was fun to tickle people with, so I guess they served a function.

The conceit of Cabbage Patch Kids was that they grew in an actual cabbage patch, or at least that's what their logo would have us believe. We accepted it, though. They were hardly the weirdest thing about the '90s.

Again with the choking hazards. Littlest Pet Shop toys were Polly Pockets for the animal-loving kids of the '90s. There were all different kinds of pets, and they came with cute little sets that you just couldn't wait to lose key pieces of when your mom decided to vacuum your room!

Baby dolls were a huge part of every girl's life in the '90s. We had pretty inventive imaginations, but occasionally, a high-tech baby would come around, and she always became a coveted toy. Such was the case with Baby All Gone, to whom you could feed cherries. (You know how babies like to eat jars of cherries?) The spring-loaded spoon would shoot the cherries back up into the handle when they hit the doll's mouth. And we fell for it every time.

It was a glorified box, but that's all we needed. Playing house was the ultimate '90s girl activity. I always chose to be the family dog, no surprise there.

Remember this one? It was so simple, so silly, and it kept us occupied for hours on end. There were little pearls in the bottom of the water-filled container that you would use the side buttons to try to shoot between the plastic knobs on the top. That was it! It was my favorite game.

The '90s were all about glitter. So when the opportunity arose to dip our Barbie's hair in it, we freaked. You used a comb to brush glitter goop into Barbie's hair and glitter. Got. Everywhere. It was awesome.

Every '90s girl knew Cat's Cradle. You didn't need to own the book — you learned it just by being alive. It's like how baby sea turtles instinctively know which direction the ocean is in.

Long before bronies were a thing, My Little Pony was a staple of '90s girls' toy shelves. They had long, luxurious hair that you could brush with a heart-shaped comb and they came in all different colors. Horses were a big deal to '90s girls, and so were rainbows, so My Little Pony was the perfect toy. Now let's talk for a second about Barbies. To say that Barbies are popular is an understatement. But did you know they are also valuable? Although the Barbies your parents have stuffed away in a box in their attic are probably not collector's items – and let's face it, you most likely ruined their hair and lost all their shoes, but it's possible that you may have a Barbie that's worth thousands of dollars now.
20%