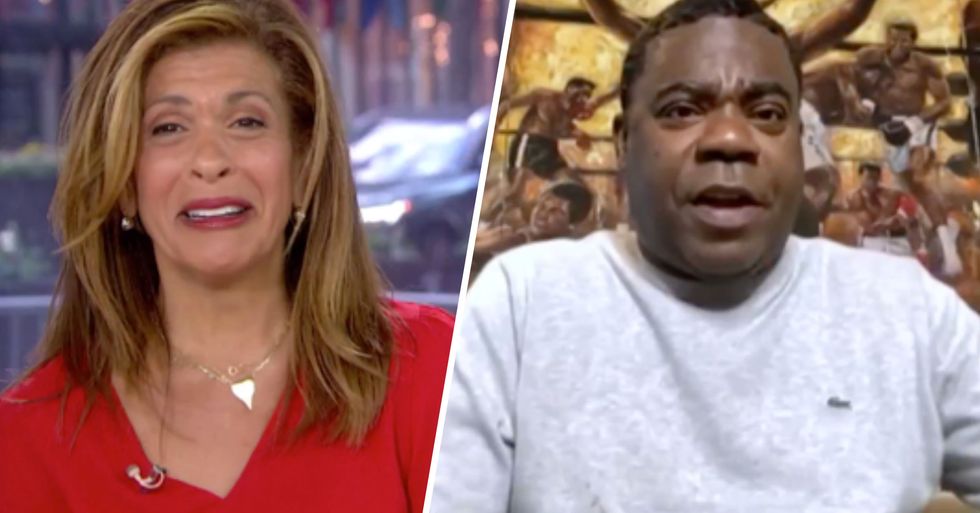 Everyone is currently living in quarantine... including the rich and famous.

Tracy Morgan recently opened up about his life in isolation and he opened up a little bit too much about how he has been passing the time with his wife...

The majority of the world is experiencing life in quarantine right now...

And that most certainly doesn't exclude the rich and famous.

Our beloved celebrities have also been practicing self-isolation...

And they have been keeping us updated plenty with their new lives in quarantine.

Lots of celebs have been doing this daily.

For instance, Miley Cyrus has started her own talk show on Instagram live. She's calling it "Bright Minded," and even has her own mug already.

John Mayer is sharing how he's doing with a series called "Current Mood."

He isn't taking things quite as seriously as some of his cohorts though, which honestly is what we're here for.

Other celebs are trying to give back.

Kumail Nanjiani and Emily Gordon started a new podcast to help you stay entertained while you quarantine and they're donating all the proceeds to charity. That's what we like to see.

Josh Gad is doing his part by sharing some good stories.

He's reading children's books on Twitter so that you can leave your kids in front of the screen for ten minutes and feel like they're still getting educational content.

But if you're looking for some slightly more adult content...

Paul Feig is hosting "Quarantine Cocktail Time," mixing up exciting new drinks every night so that you don't have to drink alone.

Many of us have already seen the Gal Gadot project to get all of her friends to sing "Imagine."

And most of us were not comforted by very rich celebrities in their very large houses telling us that we're all in this together. Not cool.

And if you want entertainment that is truly wholesome...

Anthony Hopkins, who most of us know as Hannibal Lector, has introduced the world to his cat Niblo, and every single one of us would now die for that cat. Niblo, it's up to you to protect him.

Other celebrities are finding themselves going a little bit bonkers.

Apparently, if you're Madonna and you can't sing to big crowds you simply must sing to your hairbrush. Also, even Madonna is out of pasta, so that feels pretty relatable.

Even Nigel Barker, who's noted for of being kind of a stubborn guy, decided to have some fun on social.

He roped his entire family into a living room dance party. I have to admit, his son's face is an entire mood.

And few people make us feel more connected than Lizzo.

She's been hosting meditation sessions on her Instagram, featuring her own flute playing. I could watch it forever.

If you're still growing bored, Sam Neill is offering us some poetry.

And let me tell you I could listen to his voice for days. Please never stop Sam Neill.

But not all celebs have been taking to social media to share their day-to-day quarantining...

Some have been chatting via live-streams on news outlets, and Tracy Morgan is indeed one of these people.

The comedian appeared live on the TODAY Show recently to discuss his life in quarantine.

Speaking to Hoda Kotb, Morgan discussed how he and his family were holding up during these difficult times.

But TODAY's audience was in for a big surprise...

"Me and my wife been quarantining it for like 3 weeks so she's pregnant three times," he said, "Every week she got pregnant."

Kotb was almost left speechless by his explicit remark...

But he wasn't finished there. "We’re role-playing," he continued, "She’s playing a young maiden whose grandfather was infected... and I’m the scientist who discovered the cure. And she'll do anything to save her grandfather's life — and I mean anything."

It was rather uncomfortable...

"Ok, well, you are a creative one," Kotb managed to respond, staring down at her papers, then quickly shifting gears to try to talk about Morgan's house to which he said he was going to get his pet sharks (and gorilla?) tested for the virus.

Some people aren't exactly impressed with his comments though!

Uncomfortable isn't quite the word...

Morgan's comments have caused him to trend on Twitter today...

But that isn't always a good thing!

Check out the interview for yourselves here...

And in the meantime, keep scrolling to see The Rock washing his daughter's hands for a little bit of cuteness...