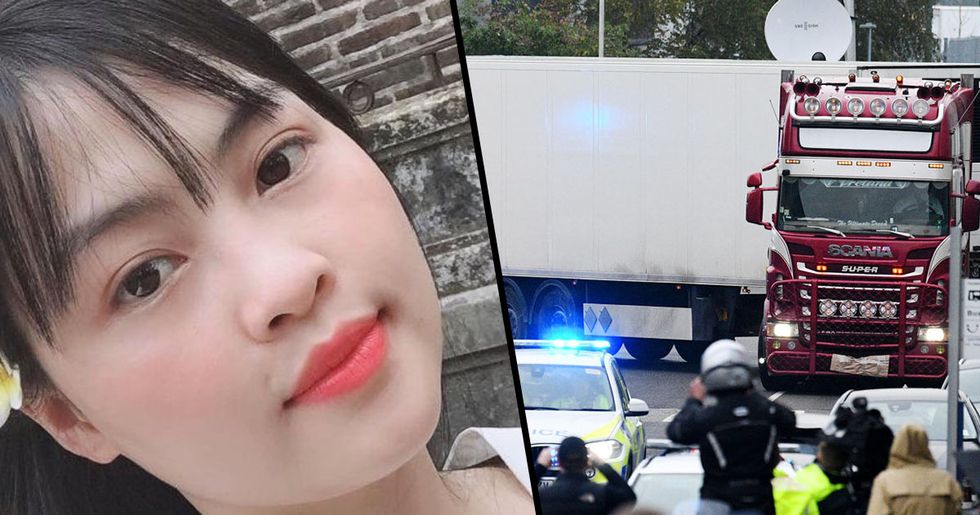 Horrifying news came in from the United Kingdom last week after thirty-nine dead bodies were discovered in the back of a haulage truck. Essex police were called to a small town in the South-Eastern county, but all thirty-nine people - thirty-eight adults and 1 teenager - were already dead upon their arrival.

It is widely believed that the thirty-nine people who tragically lost their lives were Vietnamese nationals who were being smuggled into the U.K. illegally. And now, the tragic final text messages from a Vietnamese woman believed to be among the dead have emerged.

The missing woman is from Vietnam and was known to have planned to travel to the U.K. in the search of a better life. Her heartbroken mother has now revealed the final messages she received from her daughter, which are devastating additions to the growing evidence of her being one of the victims of this tragic incident.

Thirty-nine lifeless bodies were found in the back of a truck in an industrial estate in Essex.

In the first official statement, the police explained: "Emergency services attended but sadly all thirty-nine people inside the container had died. Early indications suggest that one of these people was a teenager, the rest are believed to be adults." It was later confirmed that thirty-one of the victims were male, and the remaining eight were female.

The nationality of the victims has remained unclear.

Detectives had initially believed that the bodies found in the trailer were Chinese, but on Friday night sources reported the nationality of those killed was “now a developing picture." It is now believed that they were all Vietnamese.

And the causes of death weren't initially confirmed...

But it was widely assumed that the victims, while on the lengthy journey, suffocated inside the truck. This, however, was discovered to not be the case.

The type of truck supported the initial theory...

Many pointed out that, from the pictures, the vehicle looked like a refrigerated truck - these types are completely airtight once closed, meaning there would have been no air supply for the thirty-nine people inside.

However, it is now widely believed that the victims froze to death.

The temperature of these refrigerated containers can drop to as low as -25 degrees Celcius, making it impossible for any human to survive a lengthened period of time inside.

It was initially believed that the truck had traveled to the U.K. from Bulgaria.

And he said that it had not at all been confirmed whether the truck was registered in the country. "There is also no indication of the nationality of the human bodies found in the truck," he said. It was later discovered that the truck actually came from Zeebrugge, a Belgian port.

And it still remains unclear when, exactly, the victims were placed in the container.

The truck's driver was immediately arrested on suspicion of murder.

Not much has been revealed about the victims...

But it is believed that they were all either immigrants who were being smuggled into the U.K. illegally from Vietnam...

Antislavery.org defines trafficking as the act of harboring or transporting people into a situation of exploitation through the use of violence, deception or coercion, and then forcing these people to work against their will.

The U.K. is a destination country for men, women, and children primarily from Africa, Asia, and Eastern Europe who are subjected to human trafficking for sexual slavery and forced labor, including domestic servitude.

Taking to his Twitter account, he wrote, "I’m appalled by this tragic incident in Essex. I am receiving regular updates and the Home Office will work closely with Essex Police as we establish exactly what has happened." He did not comment on the issue of people-smuggling in the U.K.

They said in their statement: "This is an absolute tragedy and a very sad day for Essex Police and the local community. We will continue to work alongside many other partner agencies to find out what led to these deaths."

Pictures of the truck's driver were released.

Mo Robinson is a twenty-five-year-old from Portadown, Northern Ireland. The young father-to-be worked for a haulage firm.

Officers in Northern Ireland are investigating the deaths.

The National Crime Agency reportedly said that it was working to identify "organized crime groups who may have played a part."

The suspects, 2 men, and a woman were held on suspicion of manslaughter and conspiracy to traffic people, but have since been released on bail.

And, while all this has been happening...

Heartbroken families in Vietnam have been coming forward with pleas to find their missing loved ones.

Many fear that their missing family members are among the victims.

And, though none of the bodies have been formally identified yet, Essex police have visited several families in Vietnam to collect DNA samples to speed up the process.

But there is already overwhelming, yet harrowing evidence for some families.

A young Vietnamese woman, who has been missing since she left her hometown to start a new life in the U.K. sent her Mom a distressing text message on Wednesday evening (U.K. time). It is estimated that this is around the time when the truck would have been in transit between Zeebrugge and Purfleet.

Pham Thi Tra My was on her way to a better life.

But her family have not heard anything from her since she sent a series of alarming text messages on Wednesday evening.

In the messages to her mother, feared to have been sent in her final moments, the twenty-six-year-old wrote that she was struggling to breathe and apologized.

A screenshot of her messages were provided by her family.

And, once translated to English, they read: “I’m sorry Mom. My path to abroad doesn’t succeed. Mom, I love you so much! I’m dying bcoz I can’t breathe... I’m from Nghen, Can Loc, Ha Tinh, Vietnam... I am sorry, Mom".

Ms. Pham was known to have planned to travel to England.

Her brother told the BBC they had paid £30,000 to people smugglers and her last known location had been Belgium.

And, sadly, it is looking to be more and more likely that Ms. Pham is indeed one of the victims.

Mimi Vu, an expert on the trafficking of Vietnamese young people to Europe, said Ms. Pham’s texts appeared to be authentic. She told The Guardian, “She writes her name and where she is from, which is very important, to tell people where she should be buried."

The identities of the bodies are yet to be confirmed.

An Essex Police spokeswoman told The Independent that officers had received no information indicating whether Ms. Pham was among the victims. In a statement issued on Friday night, deputy chief constable Pippa Mills said the force “will not be commenting on any speculation about the nationalities of those who have tragically lost their lives."