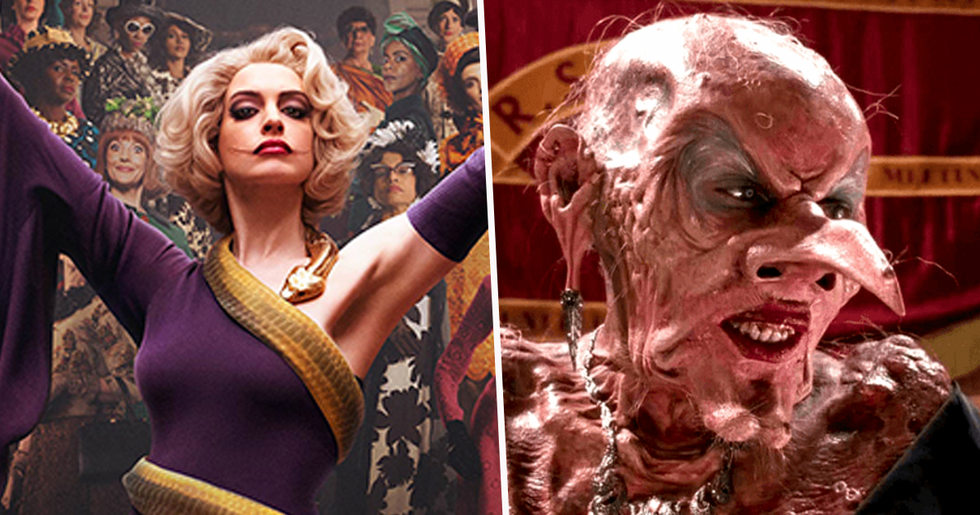 The Witches, by Roald Dahl is getting a good ol' revamp and the new movie starring Anne Hathaway has recently dropped an official trailer. We're so excited to watch it.

It's time to re-live all of our childhood nightmares.

The Witches movie has been adapted once again but this time, it's got a new, all-star cast.

Including the likes of Octavia Spencer and Anne Hathaway...

And just in time for Halloween too!

For those of you that don't know, The Witches was inspired by a book...

British author, Roald Dahl, is known as being one of the greatest children's storytellers of the 20th century. Dahl, who was from Wales, UK, was famous for both his children's novels, writing titles such as Charlie and the Chocolate Factory, The Twits, The Big Friendly Giant and, of course, The Witches.

The Witches was the ultimate children's fantasy novel...

Published in 1983, the book told the story of a young British boy and his Norweigan grandmother in a world wherein child-hating societies of witches existed in every country.

All witches were ruled by the "Grand High Witch," who, in the story, arrives in England to fulfill her master plan of wiping out all of the children on the planet.

Roald Dahl is the man responsible for introducing children to their first taste of horror, and I, for one, think that he did a brilliant job; those witches sounded utterly terrifying.

Directed by Nicholas Roeg, The Witches was adapted into a motion picture by Jim Henson Productions, the man who created The Muppets; though it was nothing like our beloved Muppets...

The movie portrayed the characters perfectly...

Anjelica Huston was cast to play the role of The Grand High Witch, and nobody could have pulled off the role better.

And it involved a lot of mice...

In the film, orphaned Luke Eveshim, who is played by Jasen Fisher, spends time with his Norweigan grandmother, Helga, who teaches him of the witches presence. Luke is then put up to the challenge of stopping their master plan of destroying all the children in the world... or transforming them into rodents.

Encountering an army of witches doesn't even compare to never seeing your parents again...

Who can forget this scene...

The moment in which Luke is transformed by The Grand High Witch into a mouse is utterly skin-crawling...

Despite the mice being pretty cute...

The transformation in the movie wasn't so cute...

This scene is simply horrifying.

I don't think that any child will ever erase the memory of the poor little boy being brutally transformed into a mouse whilst a crowd of witches laugh and jeer as it happens from their minds.

And when the witches took off their masks...

The witches initially came across as beautiful and simply perfect ladies.

The reveal was traumatizing.

I can't have been the only child who was pretty much scarred for life after seeing The Grand High Witch take off her mask, right?

It's hard to remember that this is a children's film...

The graphic effects of the witches were impressive for the '90s, and when the witches' true identities were revealed, it truly scared the living daylights out of children (and some adults...) around the world. If their grotesque and extremely goopy faces weren't enough to scare you, their scabbed bald heads and toe-less feet will have done the trick.

Disturbing doesn't quite cover this movie...

A room full of bald, scabbing witches scratching their scalps after wearing their wigs all day? It isn't every day that you see that...

And who can forget about the little girl in the painting?

At the beginning of the film, the story is told of a little girl who was kidnapped by the witches and cursed, leaving her trapped in an oil painting for the rest of her life. I don't know about anyone else, but I think I'd rather spend the rest of my life as a mouse...

It's hard to believe that the movie actually softens the edges of Dahl's book...

Compared to the novel, the movie, in fact, holds back on the gruesome details of the witches plot to take over the world.

But the storyline is still about killing children...

And that is certainly not a popular topic in children's books.

The film adopts a dark tone throughout...

Right until the finishing scene, the film has a dark and sinister tone. One would only expect that from a story about killing children though, right?

But it works beautifully.

Despite the cruel and horrifying theme of The Witches, it can't be denied that it is a brilliant piece of work. The movie that followed up the novel perfectly, and despite it shaking us to our very cores, it is truly a masterpiece.

And now it's getting a complete re-vamp!

The first trailer for Robert Zemeckis’s adaptation of The Witches has just been revealed, a few weeks before it's official release on HBO Max.

It was supposed to make its entrance on the big screen...

But due to the ongoing situation concerning the coronavirus pandemic, it has been switched to a digital release instead.

The movie will star Anne Hathaway as the leader of the coven.

It will also feature the likes of Octavia Spencer, Stanley Tucci, and Kristin Chenoweth, and is set to hit our screens in the US on October 22nd. Keep scrolling for the new, official trailer...

It's clear that lots of us are excited about the news...

But there have also been some criticisms early on...

@wbpictures It looks too colorful. Like if nickelodeon was asked to produced the remake.
— Indra Chauhan (@Indra Chauhan)1601648462.0

@wbpictures @itskeyon Y'all if you want it to be like the original just watch that one, this is clearly aimed at a… https://t.co/VSJwi3RLIB
— Scarlett O'Whora (@Scarlett O'Whora)1601655960.0

What do you think? The Witches will be premiering on October 22nd. If you're looking for other shows to fill up your time will you wait, then keep scrolling. We got you.