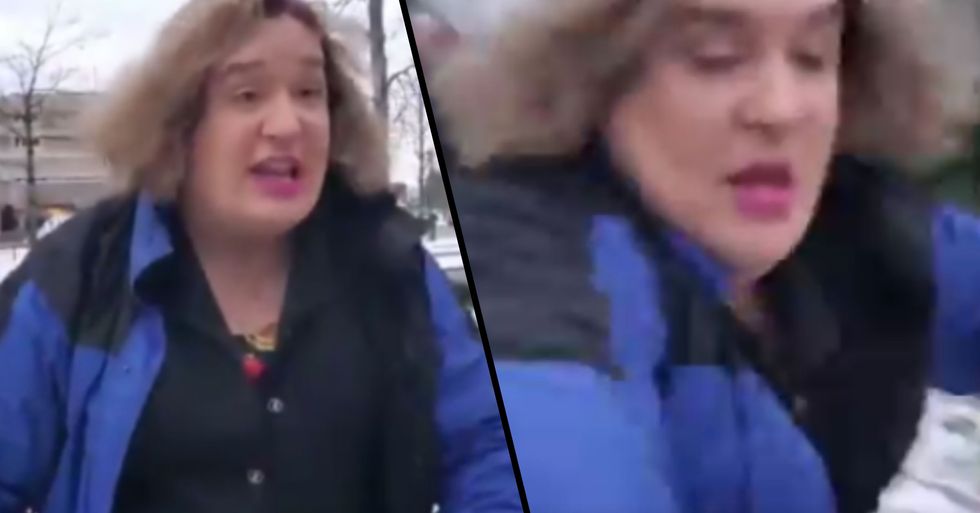 Last year, we all heard about Jessica Yaniv, the transgender woman who filed a lawsuit against the beauty salon that refused to wax her.

Yaniv's lawsuit turned into a total media storm, and many were quick to slam the activist as a "pervert", while also accusing her of abusing her trans status. But now, news has come in that, after many close calls with the law, the woman has again been arrested, but this time for assault against a journalist.

Keep reading for the full story, and to see the footage from her scathing attack...

We've all heard about Jessica Yaniv.

The Canadian-born Yaniv is a transgender woman and a transgender activist. She rose to viral fame after she visited a salon to get a Brazilian wax.

However, Yaniv didn't quite qualify to receive an intimate, female wax.

Because she still has male genitalia. The trans activist was turned away by the salon, which was quickly accused of being "transphobic," by Yaniv, all because they were "denying her womanhood."

Yaniv filed a number of complaints against more than a dozen female waxers...

This was done with the help of the Human Rights Council (HRC) in British Columbia. According to reports, Yaniv claimed that the women’s refusal to give her a Brazilian wax, and refusal to handle her manhood while removing hair, is discriminatory behavior.

The hearing learned that Yaniv came across the waxing business via Facebook back in 2018.

And, despite the LGBTQ+ community usually standing by one another...

People were quick to turn against Yaniv, branding her a "psychopath" and even a "predator."

Many questioned Yaniv as to why she didn't use unisex waxing.

Because Yaniv still has a penis and testicles, people were wondering why she simply couldn't use a salon that provides services for both genders.

The truth about Yaniv slowly began to come out after the case went public...

Screenshots from conversations with Yaniv via Facebook messenger emerged...

This user on Twitter created an image that highlights all of the inappropriate comments that Yaniv has made towards young girls. She openly expressed that she wanted to share a cubicle with a young girl and "change pads" (sanitary products) together, and even help younger girls with their sanitary needs.

Yaniv also helped to organize a youth "All Bodies" swim in her local area...

The swim was designed to welcome anyone from the LGBTQ+ community, and only allowed people aged between twelve and twenty-four-years-old. However, Yaniv outlined the rule that parents and/or caregivers are not allowed to attend for "privacy and safety," as well as putting in a rule that allows participants to attend topless if they please.

Yaniv was even been branded a pedophile...

Her behavior has been incredibly alarming.

Yaniv seems to have a slight obsession with young girls, in particular, those who are hitting puberty, and the thought of allowing her to run an event full of youngsters, with no guardians present, is unnerving.

Things were not going well for Yaniv.

And things were about to get a whole lot worse...

Because her attempt to sue the original beauty salon and its workers who refused to wax her scrotum failed, as the case was officially dismissed.

Her complaint was found not to be authentic.

The British Columbia Human Rights Tribunal said that Yaniv had "manufactured the conditions for a human rights complaint" when she had demanded a bikini wax despite still having a full set of male genitalia.

The workers of the salon were not trained to handle male genitalia.

The verdict from the tribunal read: "Human rights legislation does not require a service provider to wax a type of genitals they are not trained for and have not consented to wax."

The ruling said that Yaniv “targeted small businesses, manufactured the conditions for a human rights complaint, and then leveraged that complaint to pursue a financial settlement from parties who were unsophisticated and unlikely to mount a proper defense."

The evidence Yaniv herself gave was, according to the tribunal, “disingenuous and self-serving."

Jay Cameron, a lawyer for the Justice Centre for Constitutional Freedoms, said: "Self-identification does not erase physiological reality." "Our clients do not offer the service requested. No woman should be compelled to touch male genitals against her will, irrespective of how the owner of the genitals identifies."

And, just when you thought the drama was over...

Late last year, she was arrested for being in the possession of a dangerous weapon. When will this stop?!

It was all down to a public YouTube debate with Yaniv.

Blaire White, a transgender woman who continually advocates for LGBTQ+ rights, was involved in a "heated debate" with Jessica. The video's title involved the word "predator," so you can already imagine the hostile tone of the video.

Throughout the video, the two discussed the difficulties of being trans women.

And, after rummaging around in a drawer, Yaniv revealed that she keeps a stun gun, pepper spray, and bear spray in her apartment due to the fact that she's scared.

It is illegal in Canada to be in possession of such weapons.

The weird thing is that, after she zapped it towards the camera, she even stated that fact while smiling. White's facial expression said it all; she was shocked at what Yaniv had just done.

However, Yaniv claimed that she was charged unfairly.

"About three minutes after (the broadcast), I have RCMP showing up at my door and putting me into cuffs saying I have a prohibited weapon." She claimed that officers showed up at her apartment, despite already "knowing" that she had these weapons.

She was charged with two counts of possession of a prohibited weapon...

And the case is still ongoing.

But now, she could be facing prison time for a different charge all together...

For assaulting a reporter who has been covering her trial.

Yaniv has been arrested again...

And she now faces up to 5 years behind bars.

Keean, who has been covering Yaniv's trial from the get-go, has made his thoughts on the activist quite clear, and regularly tweets and posts articles that slam and condemn her.

He has been following Yaniv's case for some time now...

DISGRACEFUL: BC Sheriffs have barred me from the courthouse where Yaniv's appearance will be in 20 minutes. They sa… https://t.co/bw0l4Muelq
— Keean Bexte (@Keean Bexte)1578951867.0

And his presence has finally gotten to Yaniv, who flew into a rage after she left court on January 14th. And, of course, the whole thing was caught on camera.

The clip starts with Keean asking Yaniv, "Will you be pleading guilty?"

In which Yaniv responds by angrily walking past, saying firmly, "Go! Go! Go!"

And, while the reporter repeatedly tells her to not touch him, she takes a brutal swipe in an attempt to punch him.

The pair scuffle for a moment...

And Yaniv can be seen taking several swings in the reporter's direction.

It's a tense watch.

Keean can be heard yelling "Stop!" several times, as Yaniv shouts, "Go away from me. Go away!"

Yaniv then storms after the reporter...

While repeatedly screaming, "Get away! Get the **** away!"

Keean can be heard threatening to call the police...

Footage from the assault can be seen here...

It's a truly shocking watch. Yaniv now faces up to 5 years in prison for her attack, and whether it will affect her weapons charges is yet to be known. Keep posted for updates...