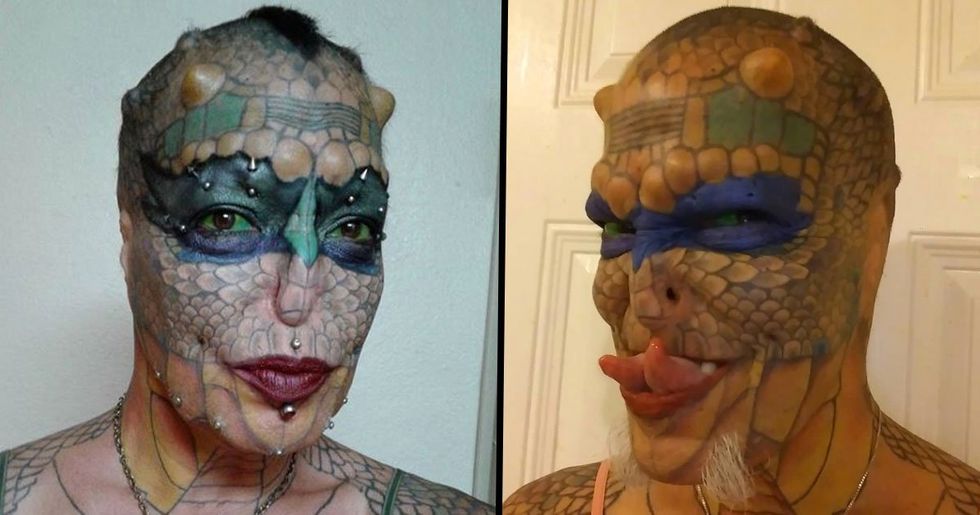 Trans-Species Woman Spends $50,000 to Turn Herself Into a Dragon

It seems as though, as a society, we're through with labels. The world is slowly becoming a more progressive and accepting place, with gender and sexuality being seen as something fluid among more and more people. I, for one, am all for people embracing whoever they want to be, even if that means wanting to be... a dragon.

Yes, you read that correctly. A transgender woman has decided to spend over fifty thousand dollars in order to modify her body so that she can become a dragon and the transformation pictures are shocking. Keep scrolling for the full story...

This is Eva Tiamat Medusa.

A trans woman from Bruni, Texas, who claims that she is "the most modified transgender person in the world."

She has spent thousands of dollars modifying herself to resemble a reptile.

Medusa has remained dedicated to this transition since she was a teenager, splashing out over fifty thousand dollars in order to warp her facial features.

It all started when she was a child...

Medusa, who was born Ricardo Hernandez, was abandoned by her parents. At five years old, she was left in the woods, where she developed a special bond with snakes before being found by her grandparents.

And life didn't get any better after they took her in...

She explained that she was abused constantly by her grandfather, who really hated Medusa's father, and, because she looked a lot like him, he took all of his anger out on her.

However, Medusa says that she was "born again" after her encounter with a rattlesnake.

She felt as though she was immediately accepted by reptiles, as opposed to her parents, and she decided that she wanted to transform into one. She told The Wizard of Odd TV: "I have two mothers: one is my original birth mother and my second birth is to my reptilian parents, which are the rattlesnakes."

And, after being diagnosed with HIV as a man, Medusa decided that she was not going to die human.

That's when the transformation really started. Now she has eight horns on her forehead, near her temples, and has tattooed scales all over her body.

She has had her tongue bifurcated and the whites of her eyes stained green so that she can closely resemble a snake. She talked about her transformation, expressing that it "is the greatest journey of [her] life" and that "there are profound reasons and deep meanings about why [she's] doing it."

She couldn't think of anything worse than dying as a "destructive and hateful" human.

"As much awesomeness and goodness there is in humans, compared to other species they are the most destructive and hateful. I decided at that time, that it was time for a change in my life, so I wanted to look like something that wasn’t human."

After undergoing her transformation, Eva doesn't identify as human anymore.

Instead, the fifty-eight-year-old likes to consider herself as a reptilian "trans-species."

The biggest reason that she decided to share her story was because she didn't want others to feel alone.

There are people out there who identify as other animals such as dogs.

Evening Standard outlined stories of those who had chosen to take this path in life. They introduced us to Gary, who appeared on Dr. Phil.

He explained that it was because he "can get friends that way, people who interact with [him] as a dog." He also pointed out that dog food doesn’t cost that much either... yikes.

If becoming a different species makes someone happy, then leave them to it. Medusa explained that she wishes that more people would be accepting of her transformation, because it's something that she really wants.

She said that people constantly get confused with her identity because she lived as a gay man, then a trans woman, and now half reptile/dragon.

"There’s a lot of misunderstanding about what it means to be transsexual and then further than that – something that I’m introducing – the idea of trans-speciesism. I consider myself not just to be human anymore; I’m human and reptilian. My greatest desire in life is to continue my body modification until my metamorphosis is complete."

But, of course, some people cannot get their heads around it.

@NickGriffinBU He is mentally ill and needs treatment, although it's now probably too late. The surgeons who carrie… https://t.co/1NrIF7G8Oo
— Allons (@Allons)1565947054.0

The general feedback towards Medusa, her story, and her transformation have been negative, with many claiming that she is "mentally ill."

Which is the shocking reality of the situation. It's just not right.

This was the only almost-nice comment I could find.

@NickGriffinBU So he looks ridiculous but why is it anything to do with u?does it impact your life in any way?obvio… https://t.co/6b6SEcTNh3
— Jacky Gaskell (@Jacky Gaskell)1566464236.0

And even then, he called Medusa's transition "ridiculous."

Now, the next step in her journey is to rid herself of her manhood.

On the top of her list of priorities is to get rid of "Mr. Bojangles." And the dream may become a reality as Medusa is set to complete her full transformation by the end of the year.

For a lot of people who knew Medusa as a successful banker, this is a massive change.

She's had to cut off many relationships in order to maintain her sanity during the transformation and do what makes her happy.

And, at the end of the day, that's all that matters.

As shocking as this is to some people, I advise you to think and empathize. If this is making someone happy, regardless of whether you agree with it or not, they deserve to be respected. I mean, I could never go through with something like this, but that just makes it all the more amazing that someone else could. She wouldn't be spending so much money on her body if she didn't feel like she needed this. Eva is enjoying her life as a dragon and good for her.

And, if you're all about this transformation life, wait until you see this!

Transforming into a better, more genuine version of yourself doesn't necessarily mean that you have to spend thousands and thousands on surgeries. Sometimes, it just takes a little bit of dedication. Check out some of these amazing body transformations that will definitely make you smile!