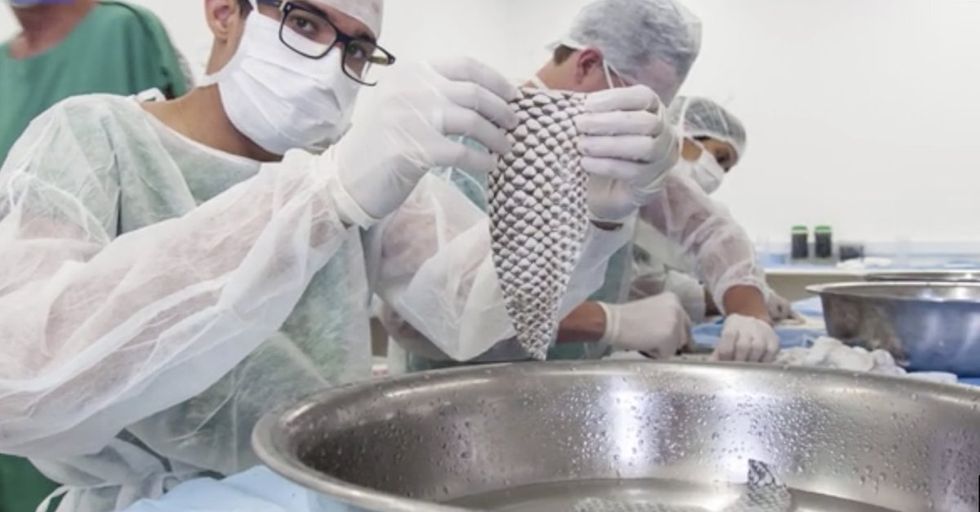 When it comes to gender reassignment surgery, standards of care have come a long way. Transitioning is never an easy process, physically or emotionally. And the prejudice that remains against trans people certainly doesn't help.

That's why stories like this one are so amazing. One woman tried to get male-to-female gender reassignment surgery back in 1999. Surgeons botched the procedure, however, and left her with serious medical problems. Using "fish skin" to construct a vagina may sound strange, but there's an excellent reason for it. Moreover, it works. That's why this woman is sharing her incredible story!

So read on to find out about this revolutionary procedure, and how it's steadily changing lives.

Back in 1999, sex reassignment surgery was still experimental.

Maju (the woman who had the fish skin procedure done) also had a botched operation in 1999 while transitioning. The operation caused her genitals to narrow and "collapse".

Which then led to many problems for the woman.

The collapse made sex agonizingly painful, so much so that Maju thought that she would have to be celibate for the rest of her life -- and might never find the right procedure to fix the problem.

Maju discovered in her early teens that she was a woman living in a man's body.

Twenty years ago, she began her transition by going under the knife.

She was one of the first in her country to do it.

"I was the fourth person in Brazil in 1999 to have, what was then, experimental surgery," Maju told The Daily Mail. "But ten years ago I developed vaginal stenosis."

Vaginal stenosis is the aforementioned narrowing of the vagina.

"The opening of my vagina started to get narrower and shorter and the canal collapsed," Maju (pictured above) said.

"In the traditional procedure, most of the inside parts of the penis are removed and the penile skin is folded into the space between the urethra and the rectum," said Professor Leonardo Bezerra, the leader of Maju's most recent groundbreaking surgery.

"The outside skin of the penis then becomes the inside of the vagina."

"But because the patient has had hormonal treatment to develop female characteristics, there is penile and testicle atrophy resulting in shrinkage in the size of the penis caused from the loss of tissue. This means the vagina can also be small," said Bezerra.

It prevented Maju from having intercourse with her partner, whom she was married to, and whom she'd been with for twelve years.

The couple eventually divorced, and Maju went to live with her mother. Then, In Sao Paulo, Maju made a discovery.

It was there that she learned of Professor Bezerra...

And his technique of creating vaginas for women born without fully functioning genitals.

Bezerra developed the procedure 3 years ago.

And since then, he says that he's successfully used it to treat 10 women with a vagina or uterus that was either underdeveloped or absent.

And this procedure included the use of fish skin.

So Maju elected to get the surgery. Before they began operating, doctors discovered that Maju still had spongy erectile tissue in her collapsed vagina from her first surgery in 1999. It had been making her symptoms much worse the whole time.

They carried out the surgery.

Thankfully, nothing too crazy was needed to fix Maju's existing problems. "The great benefit of our technique is it's minimally invasive and there's no need to do abdominal incisions," says Professor Bezerra.

So what, exactly, is this technique?

It's called a neovaginoplasty and it's essentially vaginal reconstructive surgery done using the skin of a tilapia fish.

How does the fish skin factor in?

Tilapia skin is used when doctors create a genital-mold that is then lined with the skin. An incision is made where the vagina should be and the mold is inserted.

The mold is absorbed into the body as it acclimates, and the tilapia skin is transformed into tissue similar to the tissue that normally lines a vaginal tract.

The tilapia skin is sterilized and completely odor-free. After Maju's surgery, it remained inside her for 6 days before it absorbed into her body.

The skin is, of course, rigorously prepped beforehand.

Before it can be used medically, tilapia skin must undergo a sterilization process at the Nucleus of Research and Development of Medicines (NPDM), which is a part of the Federal University of Ceará.

The tilapia skin also undergoes radiation therapy, thereby killing any lingering viruses. After that, it's ready for surgery.

After the surgery, there's another step.

After the 6 days are up, doctors insert a "big tampon" made of silicone. It needed to remain inside Maju for 6 months, to prevent the vaginal wall from closing.

"I'm absolutely thrilled with the result," she said. "For the first time in my life, I feel complete and like a real woman."

Bezerra is also pleased with the results.

"We were able to create a vagina of physiological length, both in thickness and by enlarging it, and the patient has recovered extremely well," he said.

Everything is going as planned.

"She is walking around with ease, has no pain and is urinating normally," Bezerra added. "In a couple of months, we believe she will be able to have sexual intercourse."

Before Maju, he operated on Jucilene Marinho in April of 2017. Marinho, twenty-three years old at the time, was born with Mayer-Rokitansky-Küster-Hause (MRKH). She had no cervix, uterus or ovaries.

Marinho loved the way that she felt post-op, too.

She said that it "felt so good to have something the majority of women take for granted." Furthermore, she can now have a "satisfying" sex life with her partner.

The surgery has had another first.

Last year, in November, it was carried out for the first time on a forty-one-year-old woman, who was recovering from vaginal cancer.

She, too, needed reconstruction.

Elisiane Gusmão was a teacher from Minas Gerais who had her vagina reconstructed. During pelvic radiotherapy for her cancer, Gusmão suffered damage to her vagina's structure and tissue.

And BTW, tilapia skin isn't just used for this.

Tilapia skin is rich in moisture and collagen, which speeds up the healing process by interacting with a person's immune system. So it's also used to treat burns!

Tilapia is even going to space!

NASA has announced that it'll be testing samples of the tilapia skin for wound-dressing while in orbit to test how it fares under atmospheric conditions of radiation, gravity, and pressure.

So there you have it!

Who knew that a freshwater fish's skin would be capable of doing so much good? Share this story with other friends who'd be amazed at this neat medical progress!