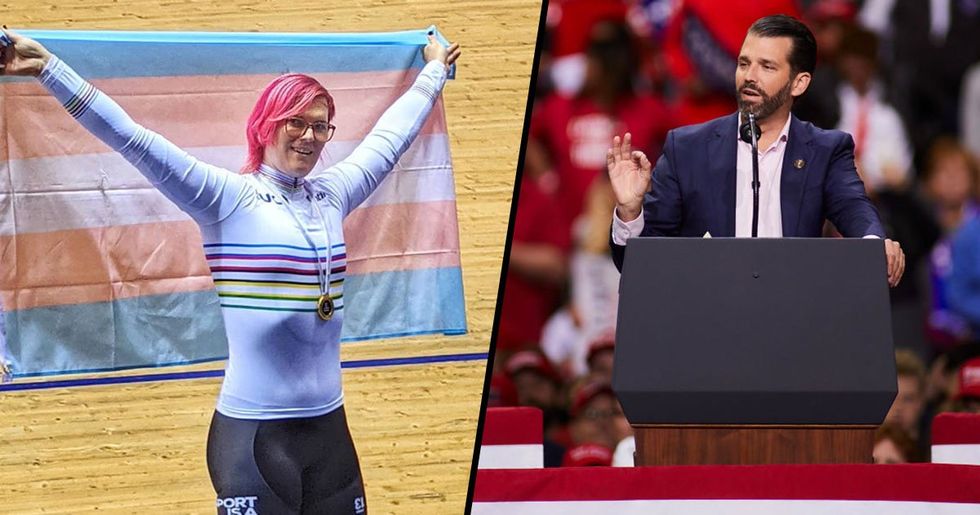 The world has certainly been divided after the transgender cyclist, Rachel McKinnon won her second world title in the sport on Saturday. Many argued that, because McKinnon is biologically born as a male, she has an unfair advantage over the other female contestants.

McKinnon, who began her transition to female back in 2012, has received a barrage of hateful messages and abuse following her win, with many arguing that, due to her being born biologically male, she has an unfair advantage in the sport.

And now, she has been forced to defend her world title win at the Masters Track World Championships after the president's son, Donald Trump Jr. called her win "bulls***", and said that it "will destroy women's sports."

Keep scrolling to read about the issue, and to see Rachel's scathing response...

The Canadian philosophy professor knew she was trans from around the age of thirteen, but "took sixteen more years to actually come to terms with it."

She officially transitioned to female in 2012.

And she announced to the world that she was female after completing her Ph.D. Speaking about her journey, McKinnon explained, "I started my transition right before I finished my Ph.D. and came out to the world two days after I defended my dissertation."

Rachel teaches philosophy and ethics at the College of Charleston...

And has written numerous papers and given lectures on the topic of transgender athletes in sports.

Because her other passion in life is competitive cycling.

And on Saturday, Rachel bagged her second world title.

She won her second gold medal at the Masters Track World Championships on October 19th, competing in the female 35-39 age category sprint.

She even set a new world record...

Her achievements have been monumental for Rachel and other trans activists all over the world.

Taking to Instagram, she wrote, "This jersey, these medals, and this world record mean a whole lot more to me than my first. There were many more barriers this year, a much bigger spotlight, truly incessant hate and people doing everything in their power to have me banned, make me fail, and make me quit." "But I didn't. And I won't."

However, there has been a lot of controversy surrounding Rachel's accomplishments.

Many people think that, because Rachel was biologically born as a male, she has an unfair advantage against the other women competing.

Rachel has even admitted that she has an "unfair advantage" in the past.

When she was asked if she accepted it is possible that transgender women retained a physical advantage over cis female competitors (the term used to describe someone who identifies as the same gender they were assigned at birth), McKinnon replied, "Is it possible? Yes, it is possible. But there are elite track cyclists who are bigger than me."

But she states that she still believes that, by stopping trans people from competing in sports, they are having their human rights denied.

"There's a stereotype that men are always stronger than women, so people think there is an unfair advantage. By preventing trans women from competing or requiring them to take medication, you're denying their human rights."

And Rachel's admittance to her unfair advantage sparked even more fury over the situation...

McKinnon has a male body and admits transwomen have an advantage against women in sport but still chooses to race i… https://t.co/TD1Hetf1vu
— FairPlayForWomen (@FairPlayForWomen)1571387903.0

With many people slamming the athlete for choosing to race in the female category rather than the male, despite knowing that her biologically male body will give her an athletic advantage over the other contestants.

And someone else who wasn't best pleased?

Anyone want to guess why??? This BS will destroy women’s sports and everything so many amazing female athletes hav… https://t.co/o2BVk1RJCn
— Donald Trump Jr. (@Donald Trump Jr.)1571665006.0

The President's overly-vocal son, Donald Trump Jr. Taking to Twitter, Trump Jr. vented, "Anyone want to guess why??? This BS will destroy women’s sports and everything so many amazing female athletes have worked their entire lives to achieve. I couldn’t care less how you identify, but this isn’t right."

He kept up the tirade, by dubbing McKinnon's blatant "male privilege" as "sad", and later writing: "You can never be woke enough! Sorry to all female athletes who spent their lives mastering their games."

Obviously, many people agreed with the businessman.

And shared their own thoughts on the credibility of a sport that allows biologically male athletes to compete with women.

But some simply told him to "grow up"...

@DonaldJTrumpJr Grow up. Decency matters. Accept someone for who they are.
— Ben Fletcher (@Ben Fletcher)1571676847.0

And reminded him to accept people for who they are.

The internet is visibly split down the middle when it comes to McKinnon's credibility...

Because, despite her transition, it is undeniable that she naturally has a male body, and the years of testosterone produced is bound to have given her a larger, more muscular physique.

And now, McKinnon has responded to Trump's jibe.

And she insisted that she has no testosterone left in her body.

So, therefore, she believes that she should be grouped in the same category as the other women.

And McKinnon actually meets the criteria set by the IAAF.

As per the rules from the International Association of Athletics Federations (IAAF), transgender athletes are permitted to compete in women’s events if their testosterone levels are lower than ‘five nanomoles per liter of blood.’

And she has labeled the whole issue over her competing as transphobic in the past.

McKinnon told BUSINESS INSIDER that her treatment illustrates the "dictionary definition of transphobia." She said, "We should never deny people’s rights because a select few, in theory, could commit fraud… The idea we should ban all immigrants because one or two might be terrorists is the height of racism, bigotry, and xenophobia. So their argument is the very definition of an irrational fear of trans women, the dictionary definition of transphobia." This year has had big news for trans people all over the world - Including the first successful birth from a trans man. Keep scrolling for more...