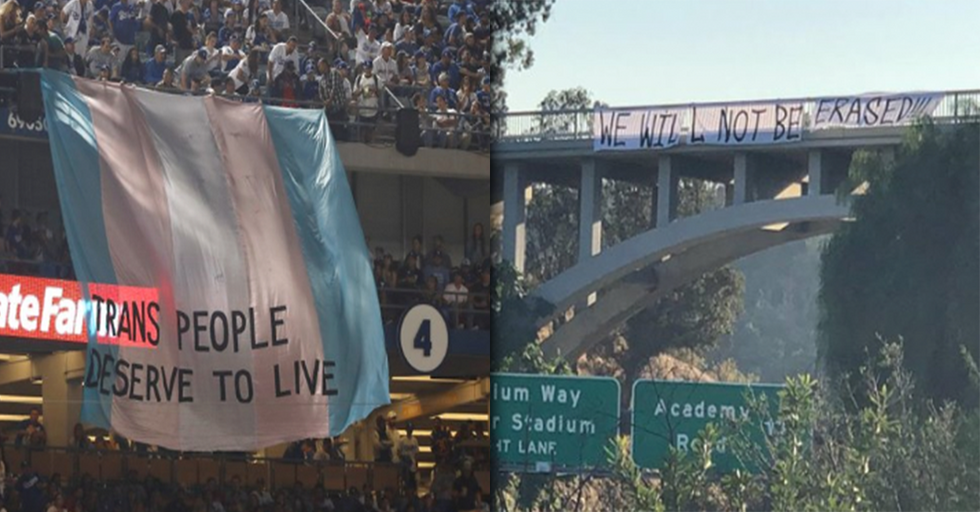 This week was the World Series. Millions of Americans tuned in as the Boston Red Sox played the LA Dodgers for the 2018 title. The series went five games, with the last game played in Los Angeles.

While many fans went to the game expecting to only see baseball, they were surprised when a group unfurled a banner during the 5th inning of the game that read "Trans people deserve to live."

Protests during sports games have become somewhat common. Colin Kaepernick started the protest of the treatment of black people by kneeling during the National Anthem, and soon it caught on with many players. The Russian group Pussy Riot ran on the field during a World Cup game over the summer to protest the Russian government.

Now, the 2018 World Series has been added to the list of sporting events featuring a protest. And many people will never forget it.

On Sunday night a group unfurled the banner during the final game of the World Series in LA.

The banner was designed to look like the transgender flag.

The banner was dropped during the 5th inning of the game.

Many people were tweeting about the incident.

Including GLAAD, a media monitoring organization founded by LGBT people.

Fox did not show the banner during the broadcast of the World Series.

But news of the banner was later shared on social media for many to see.

The banner was dropped by TransLatin@ Coalition.

They are a Los Angeles-based nonprofit that advocates for the needs of the trans Latin@ community.

If you're confused by the "@" in the name, it's a solution to a language-based problem.

In Spanish, words are gendered, so "@" replaces either the feminine "a" or masculine "o" in Latina or Latino.

The group also dropped banners around the city.

The other banners that were dropped also advocated rights for trans people.

The banners were dropped over freeways.

Some read "We will not be erased."

Bamby Salcedo,  the president of the advocacy organization gave an interview.

“I felt my heart was dropping along with it," she said to Into Magazine.

The group issued a statement about their protest.

It was a pre-planned protest that aimed at spreading this message to as many as possible.

"On Sunday, October 28, 2018, we showed the world that trans people will continue to reclaim space in places where we have been excluded. TransLatin@ Coalition dropped a banner reading, “Trans People Deserve to Live" at the Dodgers vs. Red Sox World Series game and were immediately escorted out of the stadium, but our message still reached many."

"We have been marginalized in all aspects of society for far too long, and it has caused our people to experience severe hardships in our lives, as well as lose our lives without justice."

"During a week of bad news and transphobia perpetuated by the Trump administration, we felt that it was extremely important now more than ever to be visible to the world. Trans people will not return to the shadows and remain hidden while our communities are under attack. We will not be erased and we deserve to live!"

"This country is rooted in white-supremacy, transphobia, anti-blackness, and many other ideologies that harm our people. Let us not forget that even the Dodgers Stadium itself has a long history of violence as it displaced and harmed many Chicanx people living in Chavez Ravine as the stadium was created."

"To our trans, gender non-conforming, and intersex people, we will continue to fight for your livelihood and we will not be complicit in times of injustice. Political leaders have always targeted us and they have never come to our rescue. Our communities will be the ones leading the fight toward our liberation and we will not stop until all of us are free!"

"STAY STRONG! These attacks on our communities are creating generational trauma and meant to destroy and disempower our communities for years to come. We urge our supporters, friends, and familia to stay engaged and speak out against these injustices. Trans people have historically fought for your rights and we hope you will do the same for all of us to better the livelihood of trans people and our positionality in our society."

The group livestreamed the unfurling of the banner.

But, unfortunately, they were escorted out by security several minutes later.

The group was reacting to actions that may be taken by the Trump administration to change the legal definition of gender.

The Department of Health and Human Services attempting to change the definition so that people may only identify under the law as the sex that matches the genitalia they were born with.

Meaning trans people would legally no longer be able to identify as the sex they are unless they were born with genitals to match.

Trans people could be discriminated against for a variety of reasons legally and could also lose many protections they gained under the Obama administration.

Trans rights have been a hot topic in the last few years.

For a long time, trans people were often ignored in the fight for gay rights. But in the last few years, trans people and their allies have fought against discrimination and have become more visible.

She stated her regrets for voting for Trump, who is not willing to represent trans people.

The banner at the World Series was only unfurled for a few minutes.

But some people felt it was not the time or place.

Blocking the view of the game bothered baseball fans.

The banner did cover some of the seats below, obstructing their view of the game.

Some felt it was a good message, but still were against it.

@jacknicas While i agree with the message they obstructed some very expensive seats not acceptable
— Keith Kleparski (@Keith Kleparski)1540851725.0

They felt it was unfair to people who paid for the seats.

But others felt it was more important than the game.

And that missing a few minutes of the game wasn't a big deal in comparison.

Some people saw the importance.

They pointed out that protests such as this help change policy.

Many people supported the protest.

Congrats to the @RedSox! But more importantly, thank you to the @TransLatina_C for engaging in important actions an… https://t.co/ZAlcnbaRrJ
— Chelsea Noble (@Chelsea Noble)1540786312.0

And acknowledged the group behind it.

It may have even made sports fans out of some!

There were lots of people who felt the banner meant a lot.

I tweet a lot of dumb sports things, but the winners of tonight’s World Series game are the people flying the “TRAN… https://t.co/ZNPA3uQfAe
— Henry Meier (@Henry Meier)1540778821.0

They were inspired by the act.

People pointed out the fact that it was a peaceful protest.

That got the message across.

Other people had logistical questions.