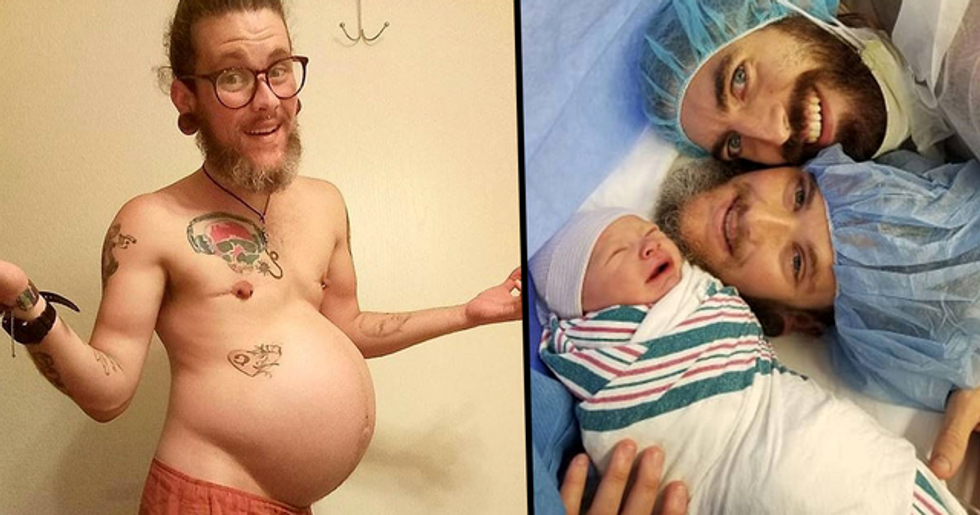 Transgender Man Told He Couldn't Get Pregnant Welcomes a Son

There are 1.4 million people in the USA who identify as transgender. Yet until recently, media coverage of the trans-community has been incredibly limited, and often very negative. It means that transgender people live in great risk, as people rarely understand their situation properly.

But out of this negativity comes one wonderfully positive story. It is the story of Wyley Simpson, who was legally a man but ended up being pregnant. It looks like the doctors aren't always right. But how was this possible?

There has been increased coverage of transgender people in the media.

Unless you have been living under a rock, in recent years you will have noticed a rise in the coverage of transgender people and their rights. There are more trans people on TV, modelling, singing and just generally, we are starting to be made aware of their lives.

What is the difference between sex and gender?

So the first thing to look at is what gender means. When a child is born, they are (usually) declared to be either a boy or a girl (or occasionally intersex). This is the child's sex. It is biological. Gender is a social construct that refers to how people identify within themselves. This refers to their behaviour and expression, rather than their biology.

What is the difference between transgender and transsexual?

Transgender means that the person identifies as a different gender to the one that they were born as. This term can encompass many different sentiments and manifestations. It includes people who are transitioning, and identify as the other gender, but have not yet had surgery. Transsexual means the person has transitioned from their originally ascribed sex to the other one. They use hormones and/or surgical procedures to become recognised as the other sex.

Since when was filling out a form so hard?

If you've ever had to fill in any form, you will almost definitely have had to sign male or female. Although for the majority of people this isn't an issue, for trans-people, it doesn't give them an option. It also makes it easier for them to be discriminated against in matters of employment, education and healthcare. For this reason, as well as the fact that they genuinely identify as a different gender to the one they were ascribed at birth, many people who identify as trans wish to change their gender legally.

Is it easy to change your gender?

No. Both legally and physically, it is a very difficult process that takes years. Some states require the person to have undergone sex-reassignment surgery in order to qualify for a legal change of gender. It is a very long, arduous process and difficult to handle mentally as well. For this reason, most people go in small steps that take years to complete, if they ever do.

So how did a man get pregnant?

Wyley Simpson is 28 years old, and has been formally transitioning from female to male for the last seven years. He started taking testosterone in 2012 and had top surgery (on the breasts) back in 2013. He had not yet had surgery on his vagina and female reproductive organs. This means that he is legally a man, but has not yet had all the surgery to complete the transition.

It's a medical marvel.

The doctors told Wyley that he couldn't get pregnant, despite having female reproductive organs. He had been taking testosterone for seven years and stopped having periods. However, at eleven weeks pregnant, he began suffering from morning sickness. It was at that point they discovered the truth.

Transitioning is never an easy process.

Transitioning from one gender to another is an incredibly stressful experience. It challenges cultural norms and gender stereotypes, all while battling between what they've been told and how they really feel. Often people do not want to associate with their old gender, as it is very difficult to reconcile the difference between what they were, how they feel, and what they are now.

It was a very difficult journey for Wyley.

Being pregnant and giving birth are pretty much the most female acts that exist. To go through these identifying as a male is incredibly tough. But as if that wasn't bad enough, he also suffered a lot from abuse from strangers.

Why do strangers take issue with this pregnancy?

Wyley acknowledged that it is not usual to see a pregnant man walking down the road. It was not the staring that made life more difficult. But people told him that he would never be a man, they have insulted his mental capabilities, and they called him 'it'.

There are some mean people on the internet.

The internet provides a cloak of anonymity that allows people to exhibit their worst selves, at the expense of others. The amount of rude comments surrounding this pregnancy is staggering. It is especially odd as the couple conceived the child through natural methods, without even planning it. But they are in a loving relationship and want to take care of their son. No harm of any sort has been caused to anyone.

The parents weren't sure about the whole thing.

Wyley and his partner Stephen had never considered having children, as they had been told that it wasn't possible. They even considered adoption. But in the end they decided to keep their son, and named him Rowan. It was especially tough as Wyley suffered from Post-Partum Depression as well.

Following the arrival of Rowan, Wyley has said that it is all much easier. The bond that he developed through the pregnancy made it all much more real. Now, he is no longer a pregnant man. Instead he just gets to be in a family where there are two dads. It is much easier for other people to process so he doesn't receive as much abuse.

Some people still won't accept them.

Although this is a couple who had sex and produced a child, in the same way as everyone else, people cannot accept their new family. It is baffling to think that people can be so small-minded, and that they want to share their small thoughts with the world.

Although some people are being far more supportive.

As this twitter user says, it's not like the man was claiming that he didn't have female sexual organs. It was just that with all the hormones, doctors had told him that it would be impossible for him to have children. Why does choosing your own gender identity offend or upset anybody?

Wyley wasn't the first father to be pregnant.

In 2007, Thomas Beatie became known as 'The pregnant man.' He had undergone gender reassignment surgery back in 2002, and was living as a documented legal male, with his wife who he had married in the regular, traditional sense.

The pregnant man had three children.

Thomas Beatie's wife was infertile. Although Thomas had undergone top surgery and had a chest reconstruction, his internal, female, reproductive organs were still intact. He became pregnant through cryogenic donated sperm. Sadly his first pregnancy was ectopic and required emergency surgery, in which he lost three foetuses. But after that he went on to have a further three children.

Beatie wrote about his situation in LGBT publication, The Advocate. He said that even doctors discriminated against him and his wife, citing religious beliefs. He said that other people laughed or turned their backs. But they were just a couple who were in love and trying to start a family, despite the wife's infertility. It shouldn't have been so hard for the doctors.

This is the modern world people.

It seems bizarre that people can still feel this antagonism in the twenty-first century. Surely we can all see that transgender and transsexual people are trying to be themselves. Hopefully recent media coverage is improving the way the world sees trans people.

Caitlyn Jenner brought a lot of attention to the topic.

In 2015, the patriarch of the Kardashian-Jenner family revealed herself to be transgender. She no longer wanted to be known as Bruce, but instead would be going by the name of Caitlyn. Such a prominent figure on the cover of Vanity Fair like this brought huge publicity to the transgender community.

Caitlyn Jenner had been seen as a very masculine character.

When Caitlyn Jenner was younger, she had played college football, as a guy. She then went on to compete in the 1976 Olympics in the decathlon. She set multiple world records and won the Olympic gold medal. Having such an 'alpha male' figure come out as transgender was huge. It demonstrated that people have their own struggles and their own identities, that don't necessarily conform with society.

Laura Jane Grace blazed a trail in the music industry.

Punk rock singer Laura Jane Grace, from the band Against Me!, came out as transgender on the front cover of Rolling Stone Magazine in 2012. Although it has been a hard route for Laura, she has always had her band and her fans. Against Me! now sing various songs about being transgender. They have an album called Transgender Dysphoria Blues, and she even performed one of their songs, True Trans Soul Rebel with Miley Cyrus.

Then there's the star from Orange is the New Black .

OITNB is an incredible show for so many reasons. But it is particularly wonderful for giving people a voice who otherwise are not shown by the media. In particular, the character Sophie Burset allowed viewers to regularly see Laverne Cox, a transgender woman.

And have you heard of the Wachowskis?

Lana and Lilly Wachowski are both trans women directors, who used to go by the name of the Wachowski brothers. They are now known as the Wachowskis instead, for obvious reasons. These women are hugely talented as directors, writers and producers. Their second ever movie was The Matrix. They of course followed it up with the rest of the, hugely successful, Matrix series.

The Wachowskis are supporting transwomen.

Following The Matrix, the Wachowskis worked together on V for Vendetta, Speed Racer, Cloud Atlas, and Jupiter Ascending. Then Lana Wachowskis co-created the Netflix series, Sense8. Sense8 has a diverse cast, which features none other than Laverne Cox.

Andreja Pejić is opening doors in the modelling world.

Andreja Pejić is a Bosnian-Australian who came to prominence for appearing in both the men's and women's shows for Jean Paul Gautier. Andreja was the world's first androgynous super model.

Now identifying as a transgender woman, she became the first ever transgender woman to appear as a model for Vogue in 2015. She has been able to demonstrate gender fluidity perfectly through her modelling.

The transgender community is still at risk of harm.

The statistics are shocking.

90% of people who identify as being transgender said they have suffered from workplace harassment. This has naturally led to the situation where 44% are unemployed. It also means that they are four times more likely than the national average to have an income of less than $10,000, and they are twice as likely to become homeless. But the worst statistic is that just of those surveyed, 41% of trans people said that they had attempted suicide. This is twenty-five times higher than the national average. It is abhorrent, devastating and terrifying.

It is wonderful to see a good-news story for the trans-community.

Amidst these terrible statistics and the awful abuse that so many transgender and transsexual people come up against, it is amazing to hear this story of a happy family. While the road will no doubt continue to be tough, people like Wyley Simpson and Stephen Gaeth are paving the way for other people to achieve what they have. Each time someone steps out as different, it makes it a little less difficult for the next people. With enough stories like this one, hopefully one day gender can be accepted as fluid, and everyone can enjoy full equality.