Transgender Woman Punches Man in the Face at Protest, He Punches Back | 22 Words 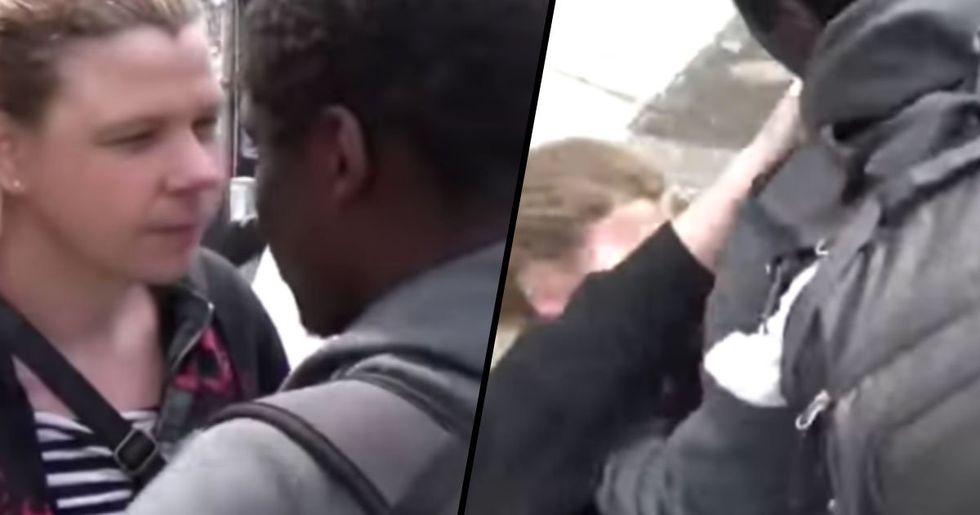 Transgender Woman Punches Man in the Face at Protest, He Punches Back

Shocking footage from an Anti-Fascist protest has been dividing opinions after it depicted an altercation between a transgender woman and a far-right man.

The woman, who is clearly a part of the Antifa movement, is seen confronting the man, who is seemingly protesting against their movement. After a lot of tension, and a lot of swearing, the woman punches the man in the face, calling for him to retaliate by punching her straight back.

However, the most problematic part is that people only intervene once the man hits her... Not when she swung the first punch. Political correctness gone mad, or no?

Anyway, the video has since gone viral, with some dubbing the man as transphobic, and others saying that the woman got what she deserved.

Keep scrolling to see the full video, and to make up your own mind on who was in the wrong...

The Antifa movement is making waves across the country.

The Antifa (Anti-fascist) movement is composed of left-wing, autonomous, anti-fascist groups and individuals here in the United States.

This group is known for its outlandish protest tactics...

The principal feature of Antifa groups is their use of over-the-top, and direct action, with conflicts occurring both online and in real life.

They have been known to use violence as a means of spreading their message.

They engage in varied protest tactics, which include property damage, physical violence, and digital activism against those whom they identify as fascist, racist, or on the far-right.

Where did the violence come from?

Their ideology is rooted in the assumption that the Nazi party would never have been able to come to power in Germany if people had more aggressively fought them in the streets in the 1920s and 30s. Makes sense...

And now, video footage from one of these Antifa protests has gone viral...

Because it involved a transgender woman being punched in the face. I promise that I'm not making this up.

However, the video has divided opinions...

Because nobody can decide who is in the wrong. The video was filmed in Portland, Oregon, and shows how the transgender woman, who is clearly protesting in favor of the Antifa movement, confronts a man who appears to disagree with her politics.

The video begins with the protestor squaring up to a man...

Though the pair remain unidentified...

The woman can be heard saying to the man, "You're a ******* fasc [fascist], we don't ******* need you here." From this, it can only be assumed that the man being confronted holds far-right beliefs, or at least the anti-fascist protestor firmly believes that he does.

And, going by their hidden faces, the assumption is that these men are storming the anti-fascist demonstration in protest for their far-right beliefs.

Yet, despite the hostility, the trans woman continues to confront the man.

Tensions escalate as the pair square up...

The video is continuously obstructed by a red and black flag...

The flag, which can only be assumed to be the Antifa flag, is deliberately waved backwards and forwards in front of the camera in an evident attempt to block the view of the altercation.

And the woman is seen throwing a single punch at the man, hitting him firmly in the face.

The man seems stunned for a second...

And he stands motionless for a moment, before asking the woman, "Is that the best you got?"

And responds by punching the woman back.

The pair descend into a scuffle on the floor.

And the people watching the fight quickly attempt to pull the pair apart, with shouts of "Knock it off!" and "Get the **** off her" being heard amongst the commotion.

The video ends with the pair being dragged apart...

And, though some people have been quick to label the man as transphobic, it is quite clear to see that the woman instigated the full thing, and was ultimately the one who started the violence.

Though be warned, it contains language and violence that some people may find offensive.

Despite the man being possibly alt-right...

It is quite evident here that the woman was the one who instigated the violence. As for him punching her back? All I can say is, don't throw a punch without expecting one straight back. It's just common sense, isn't it?