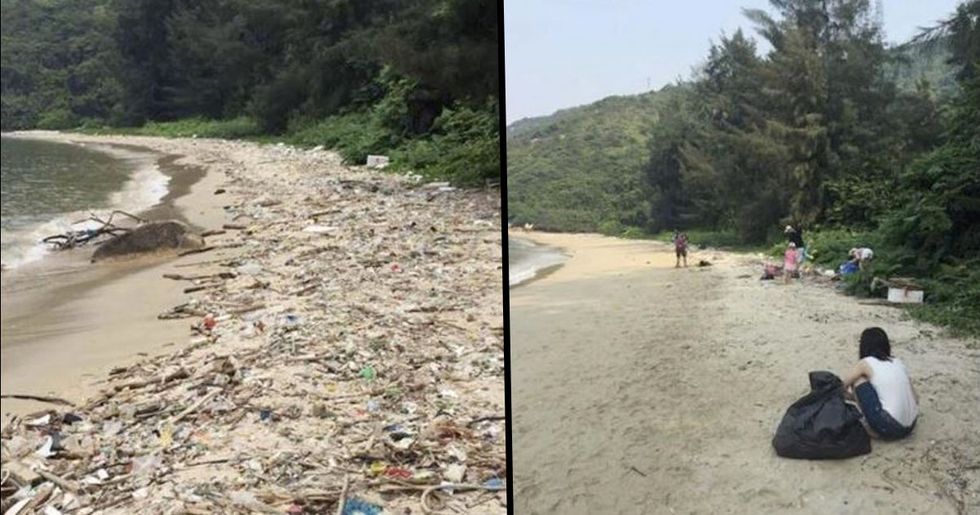 Forget the Ice Bucket Challenge or the more recent Ten Year Challenge, this month it's all about the Trash Challenge.

This viral challenge encourages people across the globe to post before and after photos of themselves cleaning up outdoor spaces such as local parks or beaches with the hashtag #Trashtag.

Although not a new challenge, it was originally created back in 2015, it has recently been given a new lease of life by Facebook user Byron Roman who posted last week asking 'bored teens' to take it on and do their bit by removing rubbish from outside space in their local community.

The post has since been shared over 300,000 times and people are loving the idea.

Let's check out some of the best before and after transformations.

Did you know only 9% of plastic is recycled?

The rest will end up either in a landfill or worse, in the ocean. But does anyone really think about this when they pop to the shop to buy a bottle of coca-cola?

Currently, in the US, there are more than 3,00 active landfills.

And around 10,000 old ones. This may seem like they are heading in the right direction but the stats are misleading. Although the number of active landfills is decreasing, they are in fact getting bigger in size. A sneaky way for waste companies to look like they are changing for the better? We think so.

This the Pacific Ocean which is home to thousands of species of marine life.

But certain waste companies see it as nothing more than a dumping ground for rubbish that they have nowhere else to put. Do they care about the fish that are harmed from this? It would appear not.

This is what actually happens when plastic is dumped in the sea.

It is easy to bury our heads in the sand when it comes to matters of the environment as we don't think that one person can make a difference. But imagine if we all stopped boycotted brands that didn't use recyclable materials? They'd soon change their policies then.

Do we really want the whole world to end up looking like this?

A truly heartbreaking picture but one that could become a reality in years to come if we do not start to tackle the problem of plastic waste. This is not a problem that will just go away on its own.

But on a more positive note, it seems that people are finally taking some responsibility for the world they live in and in particular, their local surroundings.

That's the spirit, Tyra. It only takes one person to make a change, however small. Others will soon follow.

The Litterati is a crowdsourced community with the aim to clean the planet one piece of litter at a time.

Founded by Jeff Kirschner, who was inspired to create this community whilst out hiking with his four-year-old daughter who found a tub of cat litter dumped in a creek, Literatti lets users take photos of rubbish that they have collected as well as being able to track their environmental efforts.

Then there is this clean up of a beach in Mumbai that took three years of hard work to complete.

Identified as the world's biggest beach clean up, 60,000 tons of trash have been removed from Versova Beach in Mumbai. Proving that the efforts of one man can make a huge difference, this clean up started off as a project for lawyer Afroz Shah but soon turned into something much bigger. Well done to all that helped with this amazing transformation.

The hashtag #Trashtag has actually been doing the rounds since 2015.

Here is one example in Manila Bay which was considered one of the most littered beaches in the whole world before a cleanup was ordered by the Supreme Court. Doesn't it look nice now?

And now #Trashtag has been resurrected.

And it's all down to one man who decided to create a new viral challenge only last week.

Facebook user Byron Roman posted his version of the concept with the caption: 'Here is a new challenge for all you bored teens.'

What an ingenious way to get younger people involved in what is effectively tidying up. Why didn't somebody think of this sooner? Create an online challenge and teenagers will not be able to resist joining in.

And before he knew it, sh*t had gone viral.

His post has been shared over 300,000 times and hundreds of people have already got involved. You see, we told you that the actions of one person can really make a difference.

And it is literally happening all over the world.

Here is one man doing an epic clean-up in Nepal. That is a lot of rubbish bags! We hope he has some help disposing of them.

And here's another great example in Lal-Dhori, Girnar.

Even a small operation is a worthwhile one. If just one local resident came and cleaned up this area weekly then it would always look clean and beautiful for everyone to enjoy.

These ones are doing their bit in Greece.

With the obligatory words of encouragement to get others to do the same.

Why not do your bit in a bikini?

These ladies in Croatia have clearly been working so hard that they had to strip off a bit. We hope they have remembered to put on sunscreen! We wouldn't want the getting burnt because of a good deed.

And the award for the most filled bags by one man goes to . . .

This man, identified as Mohamed Jesus, has filled a massive 60 bags of rubbish and was quoted as saying it was his duty. We applaud you, sir.

Some have been organizing local clean ups for some time but have been further motivated by the #Trashtag challenge.

This is The Cleaner Community in Darwin which is situated in Australia's Northern Territory. A place of extreme natural beauty that needs to be preserved at all costs. Surely anyone who lives locally can give just an hour of their time to ensure this happens?

Others have since taken their own initiative since the challenge began.

Like this pair in New Delhi. Good cleaning boys! #BeYourOwnHero

Check out these little eco-warriors in Cornwall.

What better way to ensure that the next generation actually cares about the world that we live in than by getting them involved in a cleanup and teaching them the importance of preserving their local surroundings? We think they deserve a big ice cream after this!

And even more little helpers geting stuck right in.

We are glad the little ones are wearing gloves as that looks like one messy woodland area. What a great way to get the whole family outside together in the fresh air and making a difference to the local outdoor spaces.

And even students who can be notoriously work-shy (sorry students, but it's true).

These students from Tetso College in Dimapur, India accepted the #Trashtag challenge, even if they don't look like they enjoyed it too much.

This clean up seems to have been done on horseback.

We're not judging. Use whatever resources you have at your disposal, the end result is the same. Give that helping horse a carrot once all the hard work is done.

Why not get your dog involved?

Trash for treats, we are loving the concept. Do you think it would work on husbands too? Obviously for the benefit of the environment but it wouldn't hurt to use the same reward system in the home too would it?

And these ducks seem to have come in useful.

Ultimately it is down each of us to make a difference.

Keeping the environment clean is the responsibility of each of us. #trashtag #freelancercleanup https://t.co/FwX280AUVw
— kabir khan (@kabir khan)1552385427.0

We couldn't agree more. Remember what Albert Einstein famously said: 'The people who are crazy enough to think they can change the world are the ones who do.'

But who caused all this trash to be dumped on our nature in the first place?

There must be someone or something that is to blame for all this litter and non-recyclable items that are ruining the environment?

Greenpeace has a fair idea.

They put the blame solely at the feet of the large corporations who only care about their profits and not about the environment or where their waste ends up. This video makes a very harrowing watch.

But surely we can help as individuals in some way?

There are many ways to reduce your plastic footprint including using a reusable coffee cup, not buying or using plastic cutlery or straws, using tin foil instead of cling film and giving up gum.

Come on, let's all make a change.

We challenge you to take on the #Trashtag challenge in your local area. And then share your amazing transformations with us!