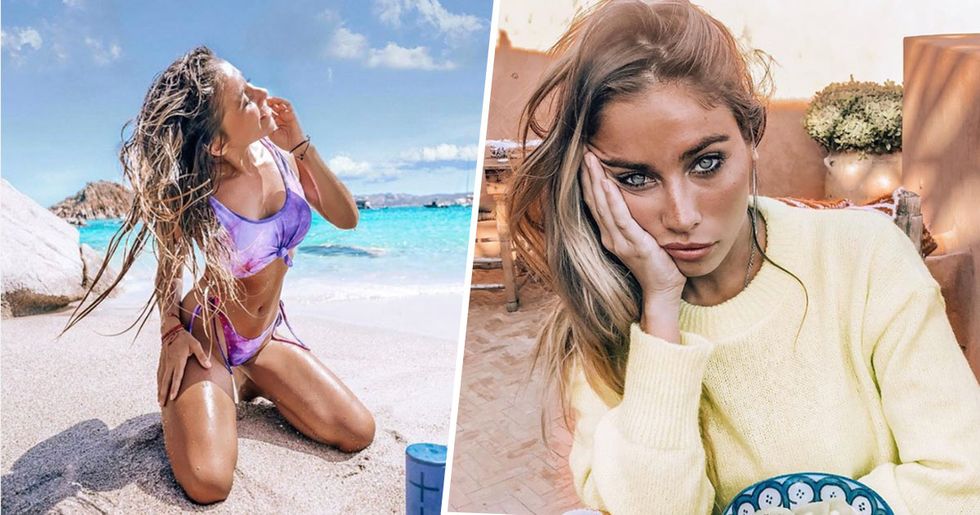 The lengths that people will go to in order to get that perfect Instagram snap are pretty crazy.

There are folk out there who earn a living through posting candid and beautiful pictures on Instagram, so it's pretty important to them to make each picture as pristine as possible.

But, sometimes, these Instagrammers go that step too far with the filters and photoshop which ultimately results in their content looking a little too good, if you know what I mean.

One Instagrammer from Argentina has recently felt the heat of online trolls after her audience noticed a serious photo editing mishap and, now, she's spoken out about the backlash...

It's no secret that Instagram is one of the most popular social media platforms, and it's the first app that people go to when they want to look at heavily filtered and tweaked versions of people's lives.

The pressure is on to get that unbelievable snap...

And, of course, filters and photo-editing come in handy when perfecting these masterpieces.

But the edits aren't always that discreet...

Even the tiniest of glitches that often go unnoticed can alter an image massively and can make it look rather strange.

And, believe it or not, celebrities are the biggest culprits.

Take the Kardashian clan, for example. They are no strangers to  Photoshop mishaps, particularly the youngest of the group, Kylie Jenner.

Check out Kylie's famously peachy behind...

Fans were quick to point out the unrealistically stretched back pockets and belt loops of her jeans, which hint massively at a Photoshop tweak to enhance her behind... which probably doesn't look like this at all in real life.

Sister, Kendall, is also guilty of a few edits here and there...

This smoldering snap is ruined slightly by the wonky door frame that is suspiciously close to her very flat stomach. Coincidence? I most certainly think not...

But is this down to a ton of filters and Photoshop? Her waist on this Instagram post is impossibly slim for her body type, and it's looking pretty unlikely that it's down to that corset alone.

Even Bad Gal RiRi is guilty of these bad edits...

Even though she doesn't need a single filter, Rihanna was caught out with this stunning Instagram post that features an incredible outfit along with her two thumbs. Once you see it, you can't unsee it...

Influencers have also jumped on the boat...

Celebrities make money regardless of what their Instagrams look like. But influencers, on the other hand, rely strongly on their social media to earn a living and every single "like" or "follow" counts.

And it is truly amazing what these bloggers can do with their images without hardly anybody noticing.

But one Instagrammer has recently been called out...

This is Tupi Saravia, a travel influencer from Argentina. She holds nearly 300,000 Instagram followers to whom she documents her travels around the globe.

Her posts are stunning...

She visits hundreds of cultural hotspots all around the world and it's safe to say that they're all pretty Instagrammable.

The beautiful sceneries aren't the only reason that Tupi has so many followers...

She's made herself somewhat of a model and uses her Instagram to also flash some smoldering shots of herself on luscious beaches all around the world.

In a number of her shots, the clouds look identical.

The tweet very quickly went viral and people weren't afraid to point the finger at Tupi...

People left comments on Reddit, writing things such as: "I never understand these people with the fake lives. If they want to do this stuff, if they admire it so much, they should just go out and do it for real." Another user wrote: "So she goes there during the bad weather time of the year to save probably a lot of money. Kind of smart but still sad what people will do for likes."

Tupi spoke out about the mishap...

Speaking to BuzzFeed News, she said: "I can't believe how far this went. I used an app called Quickshot to help the composition of the photograph when the sky is burned or overexposed."

Quickshot is a photo editing app that has a feature called "Sky Control."

This feature allows cloud patterns to be added into photographs, and it's clear that Tupi has used the same patterns for a number of her posts. "I just happened to like that one," she said when asked about these cloud patterns.

"They were always aware about this because I never hide it," she said of her followers. "I always tell them the apps I use."

She added, "Actually I'm the first one to tell the joke that the clouds are following me around the world."

In regards to the negative comments...

Tupi appears confused by all of the negativity. "I really don't see the big deal [here], I never lied about it," she said. "I haven’t done anything wrong, and it was never my intention."

But despite the negative comments, Tupi still continues to hold an impressive following...

It's clear that she is doing something right as she has almost 300,000 followers, and, even if she does use Photoshop, she has always been honest about it with her fans so, technically, she's doing nothing wrong here. Speaking of influencers doing the most to get that perfect shot, keep reading to find out why Instagram became home to pics of people posing outside a toxic dump.