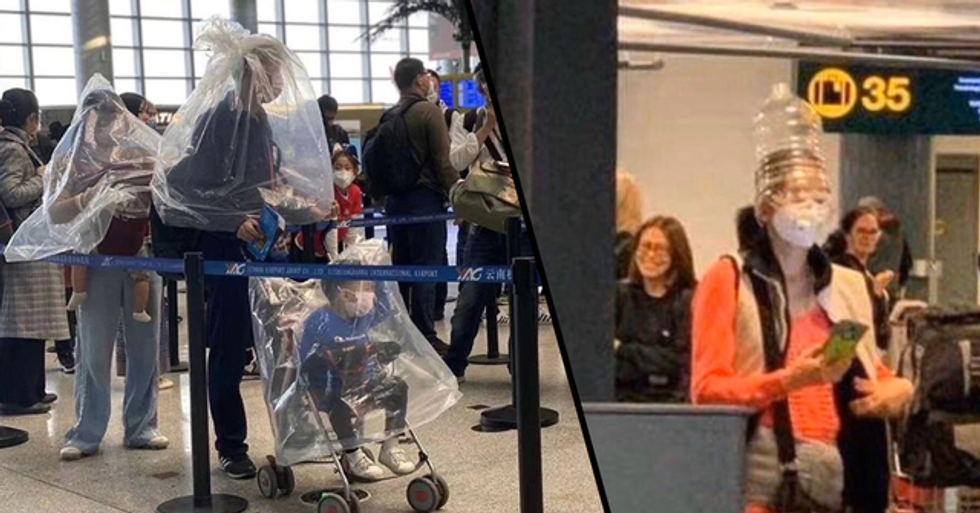 Travelers Are Going to Extreme Lengths to Protect Themselves From Coronavirus

Keep scrolling to see the bizarre photos from the airports, which demonstrates perfectly the panic people are experiencing.

So far, there have been over 8,000 cases of the virus, and 170 people have confirmed to have died.

But, despite the worrying chances of being infected...

Some have decided to take the risk and travel to and from the country anyway.

And the majority have been donning face masks in an attempt to lessen the chance of catching or spreading the virus.

But some people have taken some rather interesting tactics to avoid infection...

And we're not talking about face masks or hand sanitizers, here.

Things have been getting quite silly.

Various travelers have been spotted going to extreme lengths to avoid catching the virus... Including this woman who, rather foolishly and rather dangerously, put a giant plastic bag over her head.

An entire family was captured, standing patiently in a check-in queue, while all wearing giant plastic bags that covered their heads and bodies.

Some opted for giant plastic bottles...

A woman and her child were seen walking casually through the airport... While wearing massive plastic bottles over their upper bodies.

And this woman doubled up...

You can never be too safe, right?

Obviously, these methods are not effective ways of avoiding the virus.

No amount of plastic will protect you from the coronavirus, sorry.

It is probably best to ditch the plastic...

And all other plans to travel in and around China. The coronavirus incident is still developing, and we will bring you updates throughout its progress.