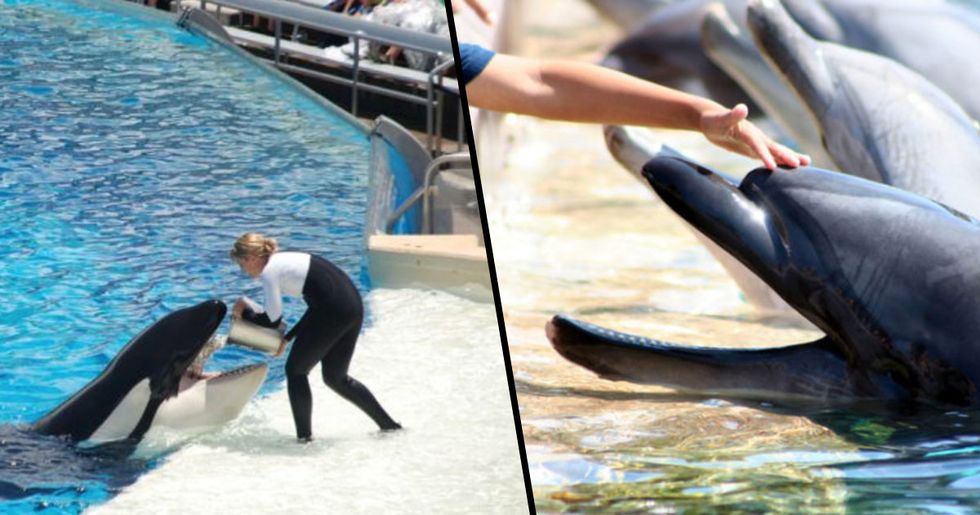 If there's something that we all share, it's an unconditional love for our beloved sea mammals. Dolphins and whales are two of the most popular sea mammals, and their intelligence and respective gentle nature is what makes them so lovable.

For years, these popular creatures have been kept in tanks that are too small for them so that they can suitably entertain us humans. Keeping these sea creatures in captivity and making money off their performances in front of huge audiences has sadly become common practice, mostly thanks to SeaWorld resorts around the world.

In recent times, however, protests have been made regarding the captivity of these intelligent sea mammals, and it appears that the consistency of these uproars is beginning to take effect. Fewer people are visiting Seaworld's resorts every year, and many travel companies have publicly boycotted the parks.

And now, TripAdvisor is the latest company to make a move against the cruel practice by banning all ticket sales to Seaworld and other companies that keep the marine animals in captivity.

Dolphins and whales are the most popular sea mammals held in captivity.

Since the 1960s, whales and dolphins have been kept in captivity and have been forced to perform to audiences of hundreds of people, all to make money for the companies keeping them in their confinement.

As well as whales, dolphins have been used in captivity for many years for the purpose of human entertainment. SeaWorld, which has 3 parks in the US and one in Dubai, made the captivity of these mammals popular in the amusement park industry and has featured whales and dolphins in performances since its first few years of opening in the 1960s.

Since SeaWorld opened in 1964, a total of 166 orca whales (killer whales) have been taken from the wild and put into captivity; 129 of these orcas are now dead. At least forty-nine orcas have died at a SeaWorld park.

These intelligent mammals are kept in underwater prisons.

As a likely consequence of their intelligence, dolphins and whales are trained and forced to adopt traits that are usually considered unusual in their species in the wild. For instance, dolphins are trained with food to learn their tricks, but this training involves food deprivation. They are also trained to present their tails and remain motionless for regular blood draws, which is obviously not natural.

The things that these whales and dolphins are trained to do are completely unnatural.

Dolphins and whales swim up to a hundred miles a day in the wild; whilst in captivity, the space that they are kept in is the equivalent to a bathtub. What on earth is humane about that?

Since 2013, 4 humans have been killed by interacting with orca whales. All of these incidents happened while the whales were kept in captivity. Thee of these incidents involved the same orca, Tilikum, who was held in captivity by SeaWorld. Tilikum drowned 2 of his former trainers by dragging them to and holding them at, the bottom of the tank, and he also killed a local man who broke into the park and entered the tank late at night.

It took 3 deaths for SeaWorld to put a stop to trainers entering the water with the whales. Even then, this was a foolish measure to take; captivity of these animals should have been stopped completely.

Changes need to be made.

Animal activist groups all around the world, including Peta, began campaigning and protesting against the captivity of whales and dolphins.

After decades of protesting and campaigning, a step towards progression has finally been made.

Canada's House of Commons has passed a bill that puts a complete ban on holding any species of dolphin or whale in captivity.

The Bill was nicknamed "Free Willy" and means freedom for the dolphins and whales of Canada.

The passing of this bill was a huge victory for Canada, and it's safe to say that it's about time that justice is served for the poor creatures that have endured the horrors of captivity over the years.

The bill carried some hefty consequences...

The "Free Willy" Bill aka Bill S-203 (Ending the Captivity of Whales and Dolphins Act), completely bans the keeping and breeding of these animals in captivity. Anybody now caught doing these things will face a fine of up to $200,000 (CAD), which is equivalent to 150,000 US dollars.

Is it worth it?

Think about it... is imprisoning a wild animal against its will really worth paying a $200,000 fine? You'd have to be pretty stupid to do that...

The bill doesn't only ban keeping the animals in captivity...

This law also restricts the importation and exportation of dolphins and whales. Making these creatures perform for entertainment purposes will also be banned completely.

The bill fought through the legislative process for years...

The "Free Willy" Bill fought through legislation for nearly 4 years, surviving much backlash from aquariums and parks such as MarineLand and The Vancouver Aquarium. Independent Sen. Murray Sinclair, the former judge who helped to process the Bill through parliament, said: "The Bill is a simple and straightforward one. It works from the presumption that placing these beautiful creatures into the kinds of pens that they have been kept in is inherently cruel."

History is being made for marine animals.

Executive Director of the Humane Society International/Canada Rebecca Aldworth, stated: "The passage of Bill S-203 is a watershed moment in the protection of marine animals and a victory for all Canadians."

They don't belong in tanks...

She went on to say: "Whales and dolphins don't belong in tanks, and the inherent suffering these highly social and intelligent animals endure in intensive confinement can no longer be tolerated."

A big congratulations is in order...

"We congratulate the sponsors of this Bill and the Canadian government for showing strong leadership in responding to the public will and sound science on this critical issue," Aldworth went on to say.

Canada has done the right thing.

Now that Canada has taken this victorious step in the conservation of our beautiful sea mammals, it's time for the rest of the world to get on board.

More and more companies are cutting ties with Seaworld...

The animal rights group, PETA, have been urging big companies to publicly boycott Seaworld in an attempt to stop people visiting their parks.

United Airlines announced this year that it will no longer sell tickets to SeaWorld, and has even removed all mentions of the troubled marine park from its United Vacations website.

Many travel companies are disassociating themselves from the theme park...

Virgin Holidays, Alaska, Delta, JetBlue, Southwest, Spirit, Sunwing, and WestJet airlines are among the companies that have completely cut their ties with SeaWorld.

And TripAdvisor is the latest travel site to join the movement.

The company, which allows people to review hotels, restaurants, and attractions all over the world, has announced that it will stop selling tickets to Seaworld and other places that use whales and dolphins as entertainment.

The move will certainly lose them money...

As the travel company and its sister site, Viator, will no longer earn money from bookings to anywhere that breeds or imports whales, dolphins, and porpoises for public display.

But it is something that needed to happen.

And, in a statement released by the firm's director of corporate communications, James Kay, it was confirmed that, for any kind of relationship to continue, these companies would have to change their ways.

In order for these companies to make it back onto the site...

They have also urged for better living conditions for the existing whales and dolphins.

TripAdvisor went on to state that any coastal sanctuary established by these attractions would have to mimic a creature's natural environment and would have to adhere to a strict no breeding policy. Animals would also not be allowed to perform in any kind of show, nor would they be allowed to interact with visitors or guests.

Dermot Halpin, president of experiences and rentals for TripAdvisor, said, "Seaside sanctuaries have enormous potential but they need more backing from the tourism industry. As long as facilities with captive whales and dolphins continue to profit from keeping these animals in smaller, cheaper and less-natural living environments, then they don't have enough incentive to adopt serious change."

This generation of captive whales and dolphins needs to be the last.

And it is fantastic to see so many companies joining the fight against this blatant animal cruelty.