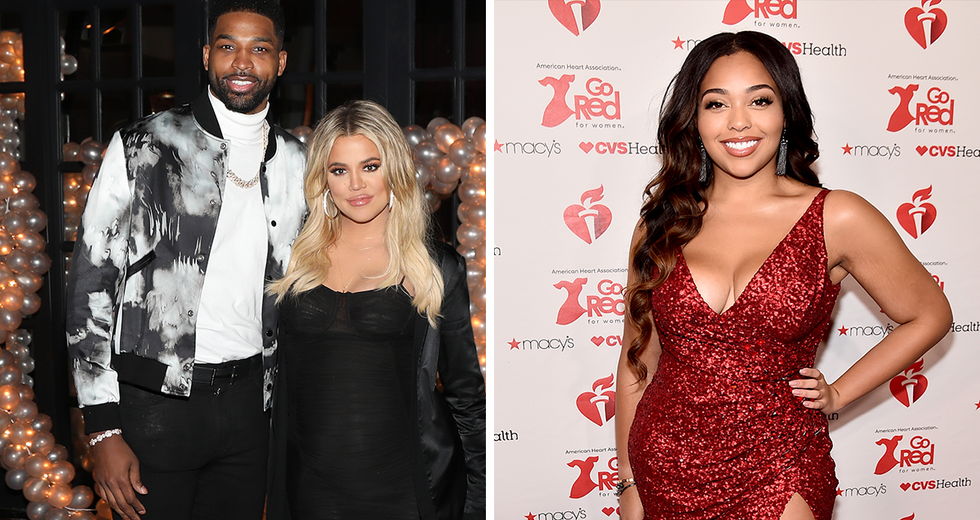 Khloe Kardashian and her beau, Tristan Thompson have broken up, only 10 months after Khloe gave birth to their baby girl last April, according to E! News. But what was the cause?

Hollywood Unlocked is saying that Khloe and Tristan broke up after he got a little too cozy with Khloe's little sister's best friend. Yes, that's right, Tristan was caught snuggling up to Kylie's BFF, Jordyn Woods at an event.

But first, let's figure out how we got here.

Khloe and Tristan actually met on a blind date.

According to an interview Khloe gave to Ryan Seacrest during the Keeping Up With the Kardashians Ten Year Anniversary Special, she said,“I mean, I don’t know what that is but I was put on a blind date with Tristan. That’s how I met Tristan." When she was asked who set them up, she replied, “Brandon Jennings, who is a basketball player, he is a friend of mine and Malika [Haqq]’s, and he was like, ‘You’re such a good girl, I want to introduce you to someone." They met at the Bel-Air hotel for dinner, along with some other friends to ease the awkwardness of a first blind date, and hit it off.

On December 20th, 2017, the couple announced they were expecting a baby.

In April, Khloe gave birth to their daughter, True Thompson.

But this isn't the first time Tristan has been caught up in rumors of cheating.

Just before Khloe gave birth, videos leaked of Tristan getting very cozy with two other women. Khloe stuck by Tristan through the scandal.

Now, website Hollywood Unlocked is claiming that one of their contributors was at a party at Tristan's house and actually saw him getting close to Jordyn Woods, Khloe's little sister Kylie's best friend and former roommate.

Khloe even commented on the post with a bunch of yelling emojis. Hollywood Unlocked described the night's events in their piece, saying, "Thompson was out on the town late this Sunday night in L.A when he took the party back to his place. Everyone was just hanging out, smoking Hookah and drinking when they were instructed to stop all use of cell phones or leave. It’s not unusual for phones to be confiscated while at the party with high-profile people. However, the vibe was chill and nobody was really checking for security until later in the night. Once partygoers put their phones away, Kylie Jenner’s best friend Jordyn Woods arrived to the late-night kickback. Thompson and Woods were all over each other, and, it wasn’t just ‘friendly.’ They couldn’t keep their hands off of each other. When partygoers asked to use their phone, they were told that they may as well leave if they needed to do so as Jordyn wouldn’t’ be leaving anytime soon. Jordyn didn’t leave the party until the early hours of 7am." Whoa!

Shortly after the story broke, Tristan tweeted "FAKE NEWS" and then deleted the tweet immediately after.

All we can say is that we hope this isn't true! Not only is Jordyn Woods only 21, but she's also a close friend of the Kardashian family and a fellow Good American #goodsquad member. What do you guys think? Sound off in the comments!