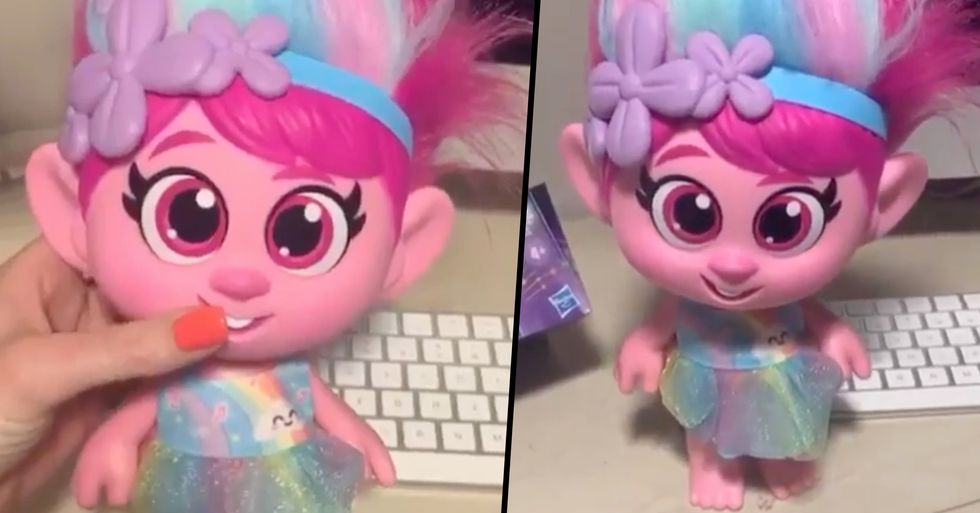 Parents have been left outraged after seeing the button placement on the "Trolls World Tour" doll because it was highly "inappropriate."

Read on for the full video explaining the reasons for all the controversy...

Parents have been left outraged after buying the "Trolls World Tour" doll...

And have now banded together to have it removed off the shelves.

And it worked because the company has now removed the product from their shelves.

I mean, it was a pretty awkward thing for parents to encounter, but the reasons behind the style choices have now been explained.

No matter what you do, there will always be someone ready to criticize your parenting techniques.

And, often, it is for the most trivial of reasons, but this time, it could be a really serious issue.

Keeping your children protected from scandals on the internet can be hard.

With apps like YouTube and Tik Tok dominating the lives of children all over the world, it becomes an impossible task to keep them from stumbling across topics that might harm or mislead them.

There is nothing wrong with educating your child and making sure they're safe...

But at what age is that appropriate?

Well, according to psychology, children start a crucial part of their cognitive development between the ages of 2-7.

Piaget's theory of cognitive development states that during the preoperational stage (which is the second stage of development), children learn to deal with symbols.

This is also the age where they learn to "manipulate symbols."

And these symbols come from "playing and pretending". The example given in the article states that "a child is able to use an object to represent something else, such as pretending a broom is a horse."

But it is important to note that symbols can continue to change until they reach the third stage of development.

However, the preoperational stage provides children with the basis to form the understanding from the things that they come into contact with during that time.

And that's why parents were outraged when they realized the toy they had bought for their child was "inappropriate."

The "Trolls World Tour" Giggle and Sing Poppy doll has recently been taken off the shelves as parents discovered the button placement on the toy was highly "inappropriate."

The controversial toy was first brought to the attention of social media users by a mom on Instagram.

Jamie Cornaby, who has now gone private, posted a video in which she explained that her 2-year-old daughter had received a gift for her birthday - the Trolls Poppy doll.

It all seemed innocent at first, with the description highlighting that Poppy sings when you push her tummy.

But after inspecting the toy, the mom quickly realized that there was also another button placed between the doll's legs...

And when pushed, it makes giggle and gasping noises...

Cornaby slammed the toy as "disturbing" before bringing up the whole "sex trafficking scandal" that seems to be dominating social media right now.

She warned other parents that "things that are thrown in our kids' faces to groom them."

She also added: "I know some of you may not think this is a big deal, but especially since I've had kids, this is wrong."

And other parents quickly swarmed to the video to agree with the concerned mom.

But as the video was sent through Facebook's fact-checking tools, the platform flagged the content as "partly false information."

Why? Because of this:

The full warning reads, "Partly false: The button triggers giggly sounds when the doll is placed in a sitting position, not for grooming kids for sex."

LeadStories.com, asserted, "The button on the rear bottom of the toy was designed to trigger giggling sounds whenever the doll is placed in a sitting position."

But other parents were also concerned about the symbolism a doll such as this one gives to children.

The fact that the doll is making giggling and gasping noises when the button between her legs is pressed is pretty uncomfortable to think about and can lead to dangerous associations children can make from a young age.

A petition that has been signed by over 150K people started circling the web.

It reads: "Our society is conditioning our children to think pedophilia is OK," the petition reads. "This is not OK for a child’s toy! This toy needs to be removed from our stores. What will this toy make our innocent, impressionable children think?"

And it seems like a lot of people agree:

This user described it as "creepy" and "wrong."

And this user completely slated the design too...

But did refer to the original intentions behind the doll.

And this user was just happy that her daughters don't have a doll like this.

The idea, along with the reasons why it's inappropriate is simply disturbing.

Regardless of the original intention behind the doll, it was removed from shelves.

The problematic design of the doll has resorted to it being taken down with Hasbro sending an email out which addressed the issue: "This feature was designed to react when the doll was seated, but we recognize the placement of the sensor may be perceived as inappropriate. This was not intentional and we are happy to provide consumers with a replacement Poppy doll of similar value through our Consumer Care team. We are in the process of removing the item for purchase."

Here's the full video that was reposted by another Instagram user:

If you have the toy and want to contact the company, their Consumer Care team can be contacted via the website. Keep scrolling to read all about other "problematic" parenting techniques.