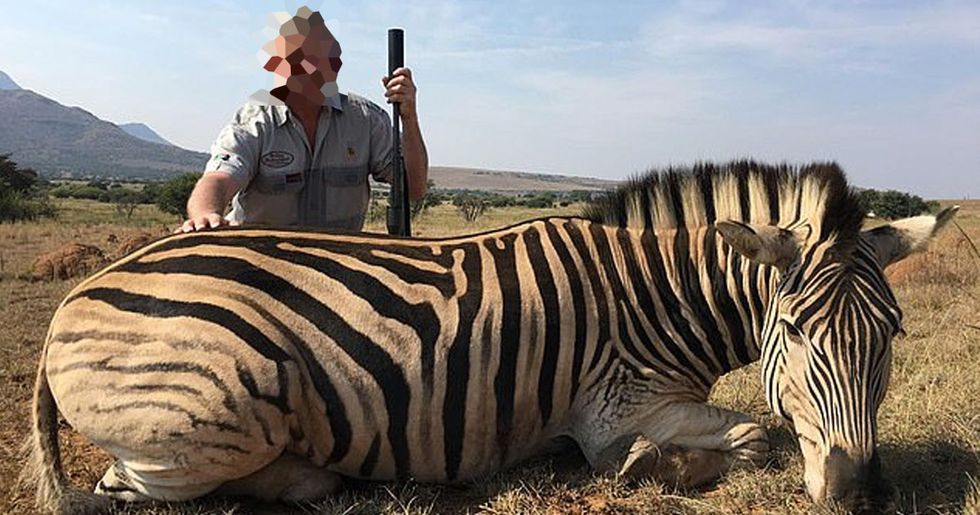 You would think that by the year 2019, humans would have learned that violence is not the answer to everything. But no. There are people out there who are still running around, murdering defenseless animals and then cowardly attempting to justify it by calling it a "sport." Sorry, but if you want to engage in that kind of cruel activity, just own the title of a killer and move on.

And recently, things seem to have gotten worse, if they weren't already. A group of British trophy hunters have hit the headlines for posting photographs of them smiling beside the corpse of vulnerable zebras. I've never seen anything so disgusting in all my life...

Keep reading to find out exactly why this barbaric practice should be abolished...

Trophy hunting is the killing of wild animals for human pleasure. Some even refer to it as a "sport." The animals are often bred in captivity and are released into a fenced-off area where they are cornered in and gunned down by hunters. It doesn't sound like a sport to me.

Because, here in the US, deer hunting is the most extreme that regulated and legal animal hunting will get. For the big "macho" hunters out there, deers are seen as child's play; many hunters want to take on larger, more dangerous animals to feed their nasty habit.

The hunters claim that they're helping to fund "conservation efforts" with the money that they pay to hunt. However, I think that's just an excuse to keep on killing. What's the point breeding animals only to kill them? You aren't adding to anything.

The Black Rhino is now fully extinct, with poaching and hunting being the primary factors to the species' decline. No one will ever see a Black Rhino ever again because these hunters couldn't help pull a trigger. Wow.

People have long protested the act of trophy hunting.

Because, thankfully, we're not all barbaric monsters on thus planet.

The photos are the most talked-about aspect of trophy hunting.

But these British hunters have taken things to a whole new level...

Approximately three years ago, we were all shocked to learn that alongside other wild animals, the number of zebras was also declining at a quicker rate than expected. The population dropped almost twenty-four percent over the past decade or so.

Because the animal is not illegal to hunt on the plains of South Africa, this group decided that was their next holiday destination. They each paid 4,915 dollars for a week's hunting in the area as well as an additional charge per animal slaughtered. And in this case, the cheapest option was a zebra, which cost them 614 dollars on top of their bill.

If you wanted to go for a different kind of animal, you'd better dig deeper into your wallet.

Hunters are expected to pay an extra 2,047 dollars to shoot at a giraffe and up to 7,916 dollars for a hippo. Sorry, but if you've got all that cash to spare, why don't you go and spend it on something less barbaric like a better haircut or a massage? Treat yourself. Idiots.

And the messages they left in the guestbook were also very concerning.

One of the hunters had written: "Never had so much fun with my pants on." There we have the Brits, always keeping it classy.

All this is to bring a zebra's head back into the country?

What kind of satisfaction do you get from that? Someone, please enlighten me because I'm having a really difficult time getting around the issue. Eduardo Goncalves, from the Campaign to Ban Trophy Hunting, commented saying: "The government should ban imports of ­hunting trophies and call on other countries to join it. It's the only way to end this evil trade."

Boris Johnson, the current leader of the United Kingdom condemned the trade.

He shared an article via Twitter with the caption: "We must end this barbaric practice." Yeah, that's all good and well but can you please change the UK's laws surrounding the problem, please? That would be a more ideal way to make progress.

In the end, it all comes down to the mindset of the individual.

Trophy hunters and trophy hunting apologists will be blocked or muted. I’d rather you didn’t follow me anyway.
— Richard Bernabe (@Richard Bernabe)1569197203.0

If you're someone who loves to slaughter innocent animals, click off of this article and go to see a therapist. Please. And if you're a normal, sane human, keep scrolling to see some happier news about this German circus who uses amazingly realistic holograms instead of actual animals in order to avoid their mistreatment. Prepare to be stunned...